I have always been fascinated by the skills shown by 18th Century miniaturists, and was intrigued when I saw this one – it is unusual, because it  features a woman in a green outfit. Somehow green s not a common colour, but it suits her. 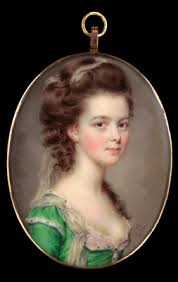 The sitter was Mrs Russell, nee Cox, and the artist was John Smart. He painted the portrait in 1781 and used water colours on a piece of ivory. Leonora, illegitimate daughter of Lord Pigot, the disgraced Governor of Madras,was married to Claude Russell  and lived at Binfield Manor House in Berkshire.

John Smart, sometimes designated ‘the Elder’ to distinguish him from his namesake who was a Scottish landscape artist, was born in 1741 and died in 1811. He  first achieved prominence when he came second in a competition held in 1755 by the Society for the Encouragement of Arts, Manufactures and Commerce. He was pipped to the post by the man who was to be his rival throughout his career, Richard Cosway. In 1756 Smart took up an apprenticeship with William Shipley, the Principal of the Society at his premises in St Martin’s Lane.  After that there was no stopping him and he won the next three competitions, and eventually exhibited his work there in 1762. Three years later he was elected a Fellow of the Royal Society of Artists (FSA) becoming a director in 1772, Vice-President in 1777, and finally President in 1778. He was married, with three daughters, but also fathered a couple of children by his mistress Sarah Midgeley.

In 1785 Smart left for Madras where he spent a decade painting the great and the good, but returned to Britain in 1795 after his daughter died and his wife left him for another man. He operated from his studio in Mayfair and continued to exhibit at the Royal Academy right up until his death. This followed a brief  illness, on 1st May 1811 at the age of seventy. 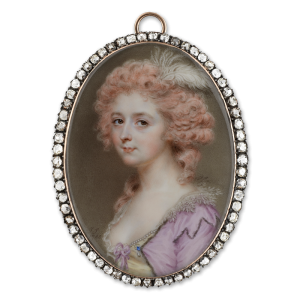 Here are a few more of his superb miniatures. The first, on the left is shown courtesy of the Philip Mould site and features “a lady” wearing a lilac-coloured dress. She has her hair dressed in pink powder set off with a small white feather.

The one on the right, below, is of Robert, first Baron Clive of Plassey  and is on the Yale Center of British Art site, part of the Paul Mellon collection. 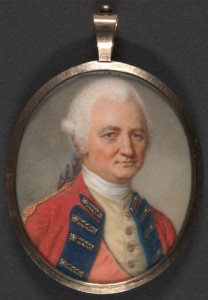 Many of the online images reflect the Indian connection – as here. 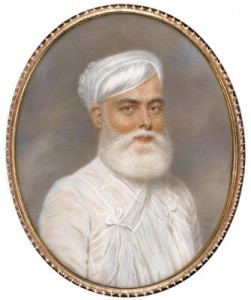 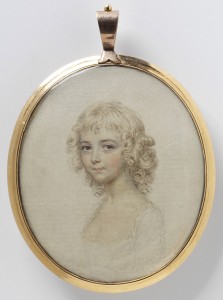 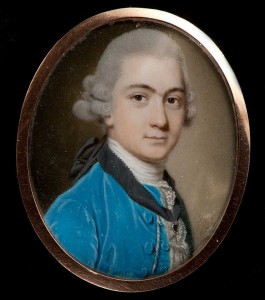 and to end with, I give you …Elizabeth Taylor! She was born as Elizabeth Haughton and lived between 1758 and 1821  and again, her likeness appears on the Philip Mould site. 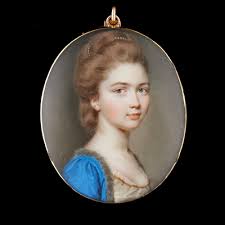