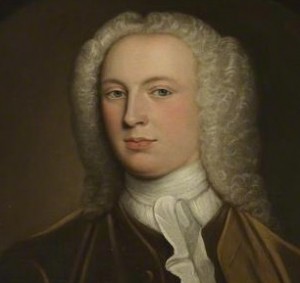 If ever a man was a product of his century, it was Dr John Wall – physician, artist, entrepreneur, man of vision, and arbiter of taste. He was born on 12 October 1708 and died on 27 June 1776 and initially made his mark as a fine doctor and the founder of the Worcester Royal Infirmary. He also was involved in the development of Malvern as a spa town and in the creation of the Royal Worcester porcelain works.

He was the son of a Worcester tradesman and went to Oxford (Worcester College and Merton) before becoming a physician with a thriving and profitable practice in Worcester. In 1745 he helped set up a charitable hospital in the town which became famous for its treatment of diphtheria and scarlet fever cases. He was convinced of the health-giving qualities of the water at Malvern and jointly with a local apothecary called William Davies he set about analyzing the water content and purity. In 1756 this led to the publication of a pamphlet extolling the benefits of the water. Basically it concluded that the water contained no impurities, giving rise to the epigram

The Malvern water, says Doctor John Wall,
Is famed for containing… just nothing at all.

He was also linked to early efforts to bottle Malvern Water, and to develop Malvern as a spa town by encouraging the development of tourist accommodation. 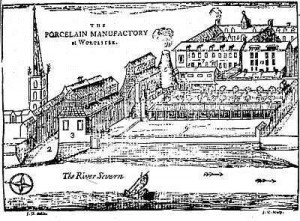 But for all these worthy interests, nothing compares to his vision and inspiration in founding the Worcester Porcelain Works (then known as “The Worcester Tonquin Manufactory”).  Again he was assisted by William Davies. They were determined to emulate the Far East with its fine translucent porcelain, but nowhere in the West had been able to work out the formula for mixing the clays. Experiments were carried out using a primitive domestic oven and then in 1751 Wall and Davies gathered together 13 other businessmen and “sold” them the idea of forming a company to develop his ideas. Each agreed to contribute the hefty sum of £4500 to establish the factory at Warmstry House, in Worcester, right by the banks of the River Severn. So secrecy-minded were these founders that they each covenanted to pay £4000 if they ever divulged the secret formula.

At the start, there were problems with the clays used in the process, and these were not solved until the new company  bought out the Bristol potter by the name of Lund (1752). Lund’s factory had used a secret formula which included Cornish soapstone. Wall and his colleagues realized that this was the key to obtaining good translucency and durability. In the early years the factory concentrated on tea services, pots, sauce-boats and pickle dishes, with some vases. While many of the shapes derived from British silver, the decoration was taken mainly from Chinese porcelain, particularly the blue and white wares. What impressed the buyers of these tea services was that boiling hot water could be put straight into the cups without risk of cracking. In a century which had seen tea consumption rise four hundred-fold ( imports weighing a massive four and a half million pounds came here courtesy of the East India Company in 1750) the popularity of Worcester porcelain was meteoric.

From 1757 Worcester pioneered the development of transfer printing. Initially this involved Overglaze black and then later, Underglaze blue. The process involved applying ink to an engraved copper sheet and then transferring this to unglazed porcelain using a sheet of tissue, and had the advantage that the same pattern could be reproduced accurately time and time again.

Dr Wall retired in 1774, however his partners continued to manufacture until their London agent, Thomas Flight, took over. By 1789 the quality of Worcester Porcelain earned the company the prestigious ‘Royal Warrant’ as Manufacturers to their Majesties – thus the word ‘Royal’ was added to the name. 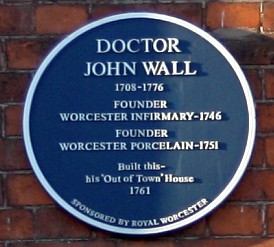 Wall was a talented artist in his own right. He apparently  favoured Classical and Allegorical subjects in a grand historical style. He exhibited at the Royal Academy in both 1773 and 1774, and was probably at his happiest when he had a paint brush in his hand. He died at Bath on 27 June 1776, and here, as a way of remembering this splendid fellow, are a few examples of the Worcester first period porcelain (courtesy of the Worcester Porcelain Museum).

A splendidly named guglet and basin from 1754 (named after the noise made when liquid was poured from the bottle).

And finally a sauce boat with the black overglaze transfer print (and by the way, any of these will be most welcome as Christmas presents….)