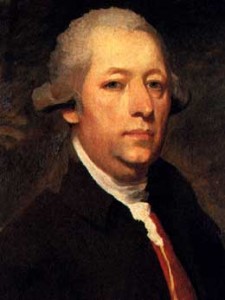 As the founder of The Times died 202 years ago today I thought I would repeat a post I originally did a couple of years back:

John Walter was  born in London in 1739. At the age of sixteen he became a coal merchant and then decided to dabble in marine insurance as an underwriter at Lloyds of London. In 1799 he was to claim ‘I was twelve years an underwriter in Lloyds Coffee House, and subscribed my name to six millions of property; but was weighed down, in common with above half those who were engaged in the protection of property, by the host of foes this nation had to combat in the American war’

Another story has it that the final straw was when a hurricane hit Jamaica in 1785. It was certainly a bad time to be in the insurance business – he lost a packet and filed for bankruptcy. He was looking around for a new venture when he remembered a contact called Henry Johnson who had patented a new form of type-setting called logography. Johnson claimed that it was  faster and more accurate than conventional typesetting because it allowed more than one letter – sometimes whole words and short phrases – to be set at a time. John Walter purchased Johnson’s patent and decided to start a printing company. He purchased premises in Printing House Square – formerly the site of a Black Friars Monastery – which had been empty since 1770. On 17th May 1784 Walter issued an advertisement which ran as follows: ‘Logographic Office, Blackfriars. Mr. Walter begs leave to inform the public that he has purchased the printing-house formerly occupied by Mr. Basket, near Apothecaries’ Hall, which will be opened the first day of next month for printing by words entire, under his Majesty’s patent’

To begin with, Walter printed books – some forty different titles including a version of Robinson Crusoe –  but he figured that logography would be well suited to printing newspapers and came up with the idea of a daily advertising sheet, which he called the Daily Universal Register. It hit the streets of London on 1st January 1785 . He was primarily concerned with advertising revenue: “The Register, in its politics, will be of no party. Due attention should be paid to the interests of trade, which are so greatly promoted by advertisements.”

He was up against eight other dailies in the capital and like them he included parliamentary reports, and news from abroad. He soon realized that logography was not the answer –  it was not necessarily faster than other methods but it showed Walter that there was money to be made out of newspapers, not least when he agreed an under-the-table payment of £300 p.a. from the Government of the day in return for running pro-Government stories. He decided on a re-launch, and on 1st January 1788 ‘The Times’ rolled off the press. Hardly a propitious background to a newspaper which was later to lay claim to editorial independence, with the nick-name ‘the Thunderer’! 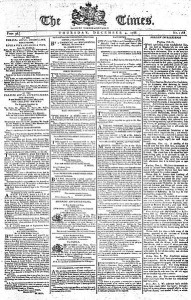 Under John Walter’s control The Times developed an increasing emphasis on scandal and gossip about well-known Society figures. Profits were helped by back-handers made by politicians and the like, all keen to keep their scandals out of his paper and willing to pay for the suppression of the truth. These profits in turn enabled the paper to make large payments to its news-gatherer and writers, leading to increasingly scandalous revelations.

One such story concerned the Prince of Wales. Walter was prosecuted for libel (then a criminal offence) and fined £50 and sentenced to two years in Newgate Prison. The libel appears to have consisted in the statement that the prince and two of his brothers, the Dukes of Clarence and Cumberland, were ‘insincere’ in their expressions of joy at the King George III’s recovery. Walters served sixteen months in prison but managed to continue editing the paper despite being incarcerated. When Walter emerged from prison the paper grew increasingly popular and influential as it developed its network of news-gathering throughout the continent of Europe.

In 1803, John Walter handed over the business to his son (of the same name). John Walter II inherited a tradition of accepting handouts from Government ministers but quickly scrapped this in favour of his own news-gathering service. The Times took an independent, pro-reform line. Technology was seen as being of vital  importance and in 1817 Walter installed a steam powered printing machine able to produce 7000 copies a day. In the same year Thomas Barnes was appointed editor. Barnes campaigned constantly for political reform and although the price (originally two and a half pence but with tax this rose to seven pence) meant that it was beyond the reach of many, The Times quickly established a large readership based on its popularity in lending libraries and public reading rooms.

On 7th March, 1832 Sir Robert Peel argued before parliament that  The Times  was the “principal and most powerful advocate of Reform” in Britain. That year saw the passing of the Reform Act , an event which The Times called  the “greatest event of modern history.” The paper also campaigned in support of the Tolpuddle Martyrs, arguing that the six farm workers from Tolpuddle in Dorset should never have been charged for ‘administering illegal oaths’ and, when they were found guilty and sentenced to seven years transportation, launched a campaign to reprieve the six.

All in all a strange background: born as a scandal-sheet, funded as a government mouthpiece, shamed by illegal payments, and dominated by left-wing pro-trade-unionist leanings – it nevertheless emerged with a reputation for supporting the Establishment.

John Walter senior was  adept at sailing close to the wind, shady dealings, dishonest reporting and the like (Mr Murdoch would surely have found him a most  engaging character). He died in Teddington Middlesex on 16th November 1812. He appears to have married in May 1759. His wife, Frances, was to die on 30th January 1798 having had at least six children, two of whom followed John into the business.

So there we have it: a newspaper launched as The Times 226 years ago, and now part of News International. Some might argue that not much has changed in 226 years…. a case of “plus ça change, plus c’est la même  chose” to quote Jean-Baptiste Alphonse Karr….