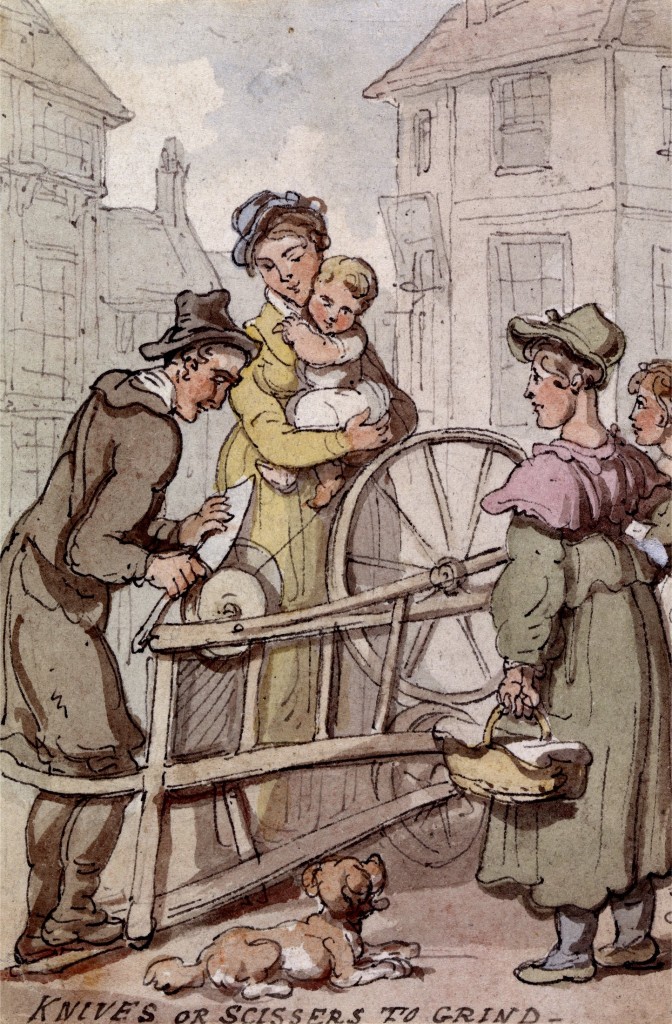 A nice little Rowlandson drawing, similar to many other “Street Cries,” with the knife grinder setting up his gadget out in the street and going about his business, surrounded by a gaggle of females presumably bringing out their blunt blades. The grinder stands inside the frame, operating a foot treadle which turns the small wheel,  linked to the larger wheel, which in its turn is linked by a belt to the small grindstone. No ‘Elf and Safety’ to protect his hands, no goggles to stop sparks flying, no ear defenders to reduce the din! I gather that the saw-sharpeners made an even worse racket! The image appears courtesy of the Yale Center for British Art, where you can find an extensive selection of Rowlandson pen-and-inks.

It is a reminder that steel blades went blunt easily – here the knife-grinder is sharpening a kitchen chopping knife: before steak knives with serrated edges, putting a fine cutting edge on a knife blade would have greatly assisted anyone chewing on their T-bone steak, or doing battle with a tough piece of old mutton.

Scissors do not appear to have changed much over the centuries – these on the left are bronze, made in Korea over a thousand years ago, and appear courtesy of the Metropolitan Museum of Art. The same site shows the ones on the right made of beaten silver and dating from the Tang Dynasty in China (618–907). You would not have sharpened those out in the street, but the designs are much the same as those used in the Georgian era. Below is a pair from the Ruby Lane Antiques site. They were described as being “Late 18th Century Primitive Handmade Wrought Iron Scissors Shears. Nice example of a high quality pair of blacksmith made shears dating circa 1750-1780. Scissor shears such as this were used for a variety of functions such as to cut various articles of cloth, but also could have been used in leather work as well. They were expertly crafted with the smith working pieces of straight iron into large finger loops. Note the early center rivet and thick blades. Some slight pitting due to age but the blades open freely”

The other type of shears, made from a single piece of iron twisted and then “sprung” were used for sheep shearing, by thatchers when roofing, and for cutting grass. I still have a pair, and they function perfectly well. These are a different pair, which I found on the Laurel Leaf Farm site.

Apparently they are stamped with the mark of those well-known cutlers (and razor manufacturers) Wilkinsons, founded in 1772 by Henry Nock. According to Wikipedia the pivoted scissors  we are familiar with today were not manufactured in large numbers until 1761, when Robert Hinchcliffe produced the first pair  made of hardened and polished cast steel. He lived in Cheney Square London  and claimed to be the first person who put out a signboard proclaiming himself  “fine scissor manufacturer”. That is possibly the case, although  James Bernardeau was trading from Russell Court in 1738 with a sign featuring a selection of cut-throat razors, scissors – and a pistol. 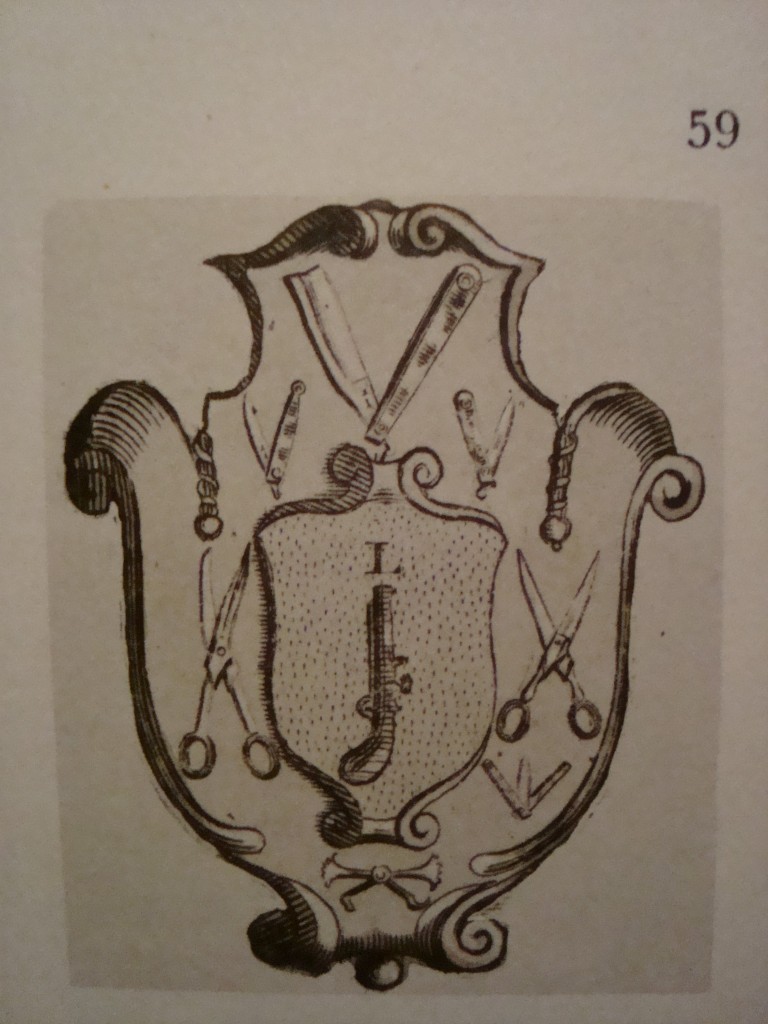 And to end with, a caricature which appears on the Lewis Walpole Library site, published by S W Fores in 1788. It is called the Fighting Taylors and shows two tailors battling it out, scissors drawn. One has snipped off the nose of his opponent, the other has cut off his opponent’s ear. The seconds respectively hold a cucumber and a cabbage – a reference to the fact that tailors reputedly lived off cucumbers all summer, while ‘cabbage’ was the name given to left-over materials which they pilfered.The foreground is littered with cucumbers and cabbages. 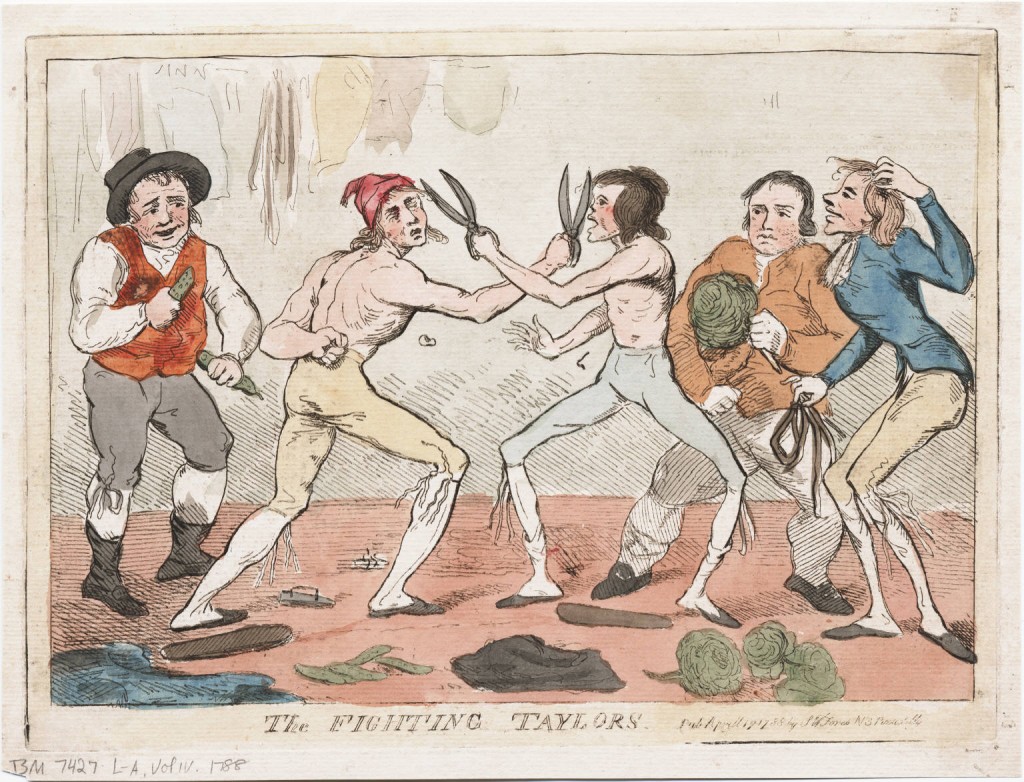 6 thoughts on “Knives and scissors sharpened….”