One of the advantages of being a Georgian Gentleman is that time-travel doesn’t only have to be backwards – it can also be sideways, giving a chance to explore what else was going on in the world while we in Britain were saddled with the Hanoverians… That’s my excuse for visiting the impressive royal summer palace known as La Granja in the small Spanish town of  San Ildefonso, near Segovia and some 80 kilometres north west of Madrid. It really is extraordinary – it shows that with  an endless pot of money, a whole army of architects all pulling in different directions and with a sense of humour (‘La Granja’ means a farm…) you can end up with a most impressive set of buildings, alongside beautiful gardens and enough fountains to sink a battleship. Well, if they were working…. normally the fountains operate at weekends in the summer but this year water shortages restricted the number of days when the fountains are in use. Somehow a fountain with no water erupting from every orifice is not unduly spectacular. In fact it is utterly pointless…

So to start with, the building or rather buildings. This is the impressive baroque façade of the ‘farmhouse’- I have to say it isn’t much like any other farmhouse I’ve ever visited… 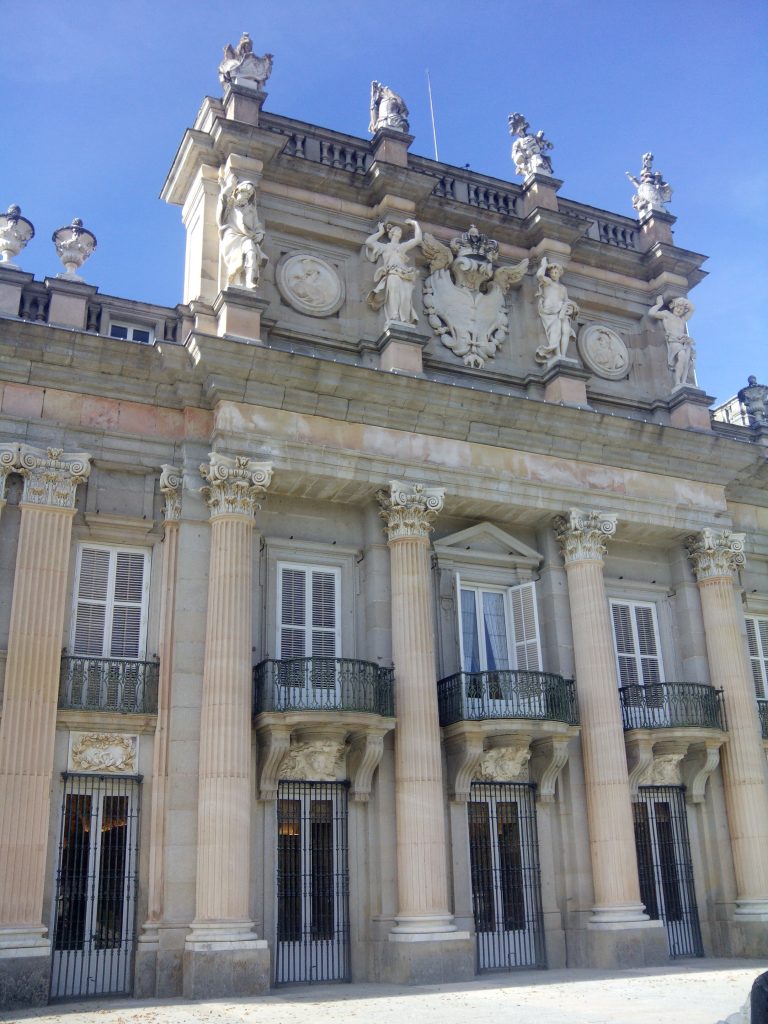 To give you a better idea of the size of the ‘farmhouse’, here is a picture of the central part of the building, viewed from above a flight of cascades and fountains. 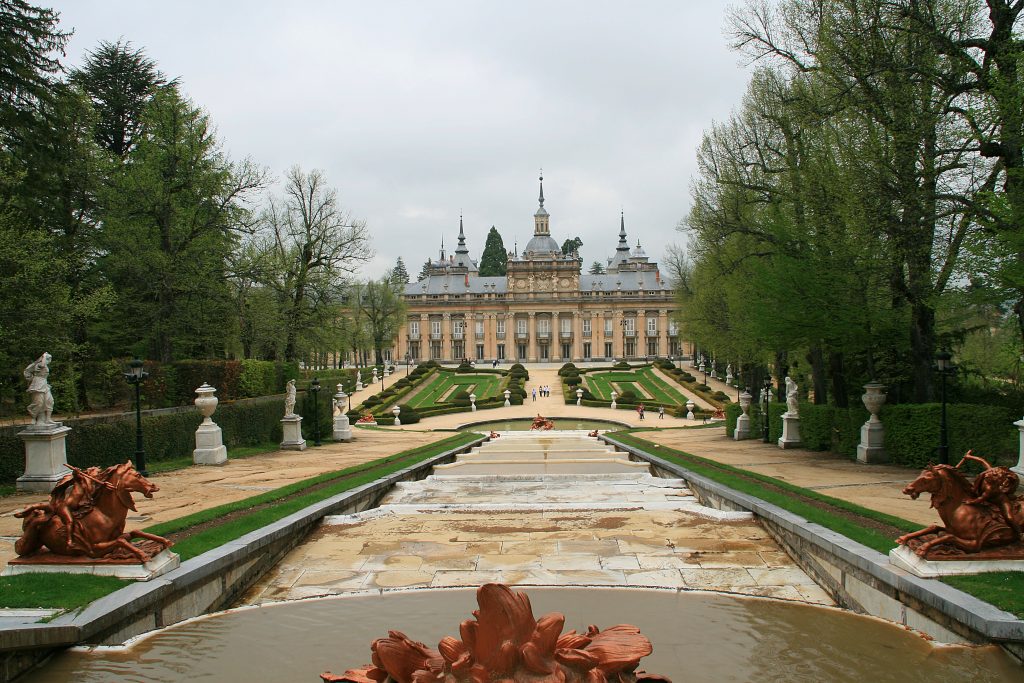 Actually there is a lot more on either side…. 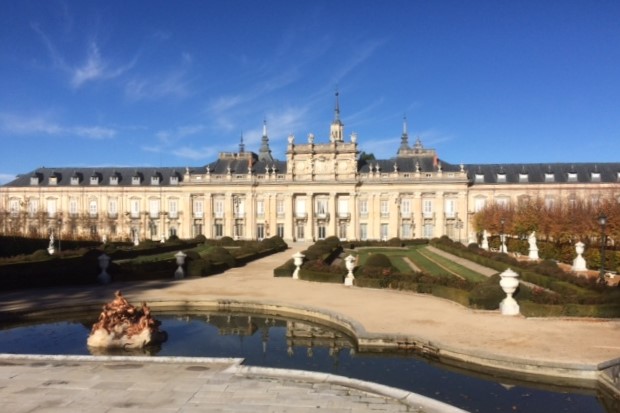 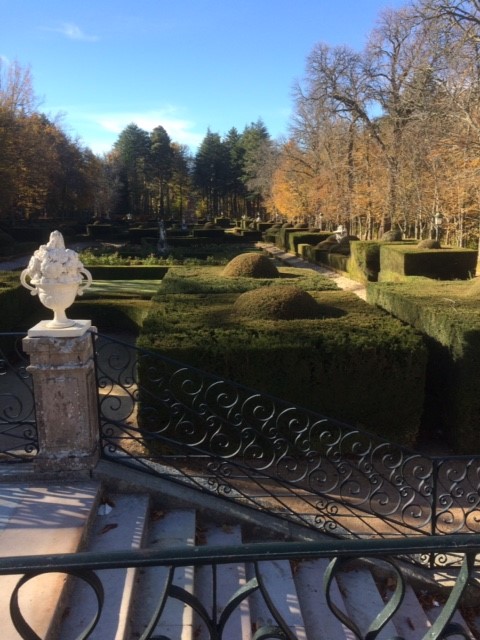 Yup, I think you can say that those royals lived on a rather different planet to the rest of us, even in the Georgian era! It was commissioned by Philip V – the first Bourbon King, and he wanted a summer retreat to get away from all those other palaces he owned around Madrid, so in 1720 he started on this. Clearly influenced by his grandfather, Louis XIV, who gave the world that understated little number Versailles, he spent a fortune on landscaping a sloping site situated near the area where earlier Spanish kings enjoyed  hunting – in the mountainous and heavily forested area of the Sierra de Guadarrama. The resulting gardens are amazing – the complete antithesis of everything Capability Brown stood for! Nothing natural, everything incredibly geometric and balanced. 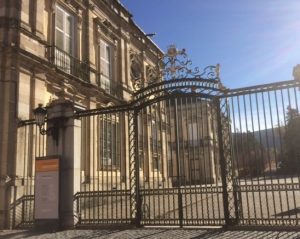 Part of the building involved a cour d’honneur – a beautiful courtyard at one side of the building,  and known, I think I am right in saying, as the Patio de la Herradura : 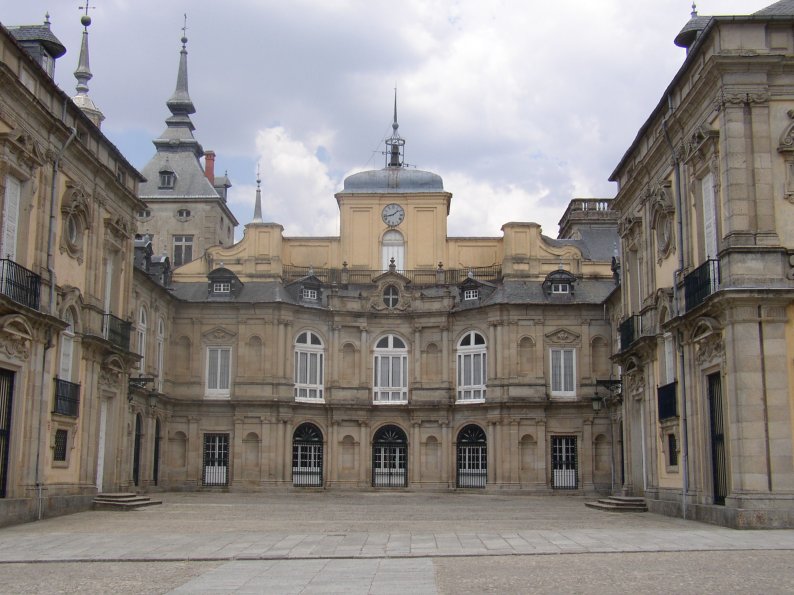 Pulling back slightly to show one of a matching symmetrical pair of structures on either side of the courtyard: 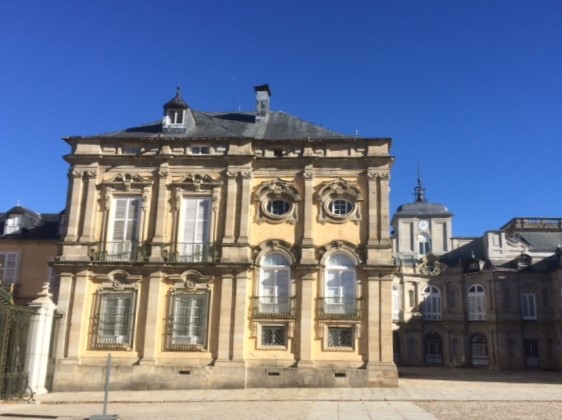 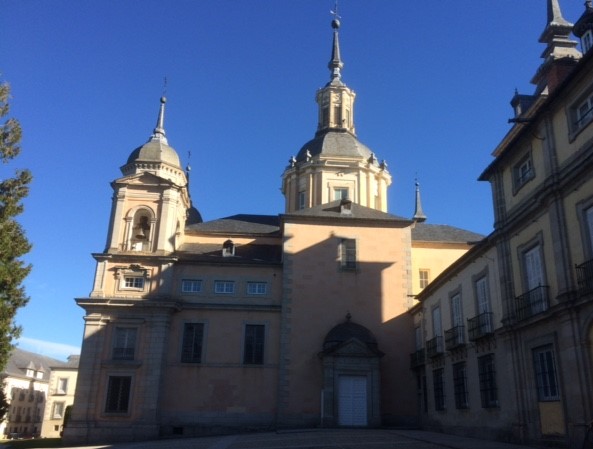 To the right of the present museum entrance is the royal chapel – a stunning piece of recently restored baroque architecture, all the better for being totally empty at the time of my visit. Talk about gilding the lily! There is gold leaf absolutely everywhere, but I appear to have forgotten that photography is strictly forbidden… 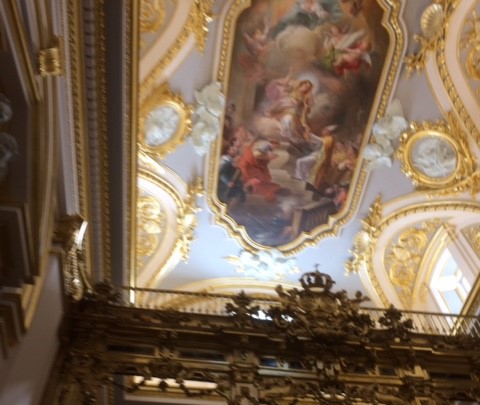 Inside the palace there are a number of rooms containing tapestries – not my cup of tea at all – but also an impressive array of rooms utterly dominated by the floors (highly coloured Carrara marble) and ceilings (amazing trompe l’oeil representations of mythical battle scenes etc).. And then there are the chandeliers! Obviously it helps having a glass factory right in the town, so the poor workmen didn’t have to haul them very far, and they are certainly magnificent. 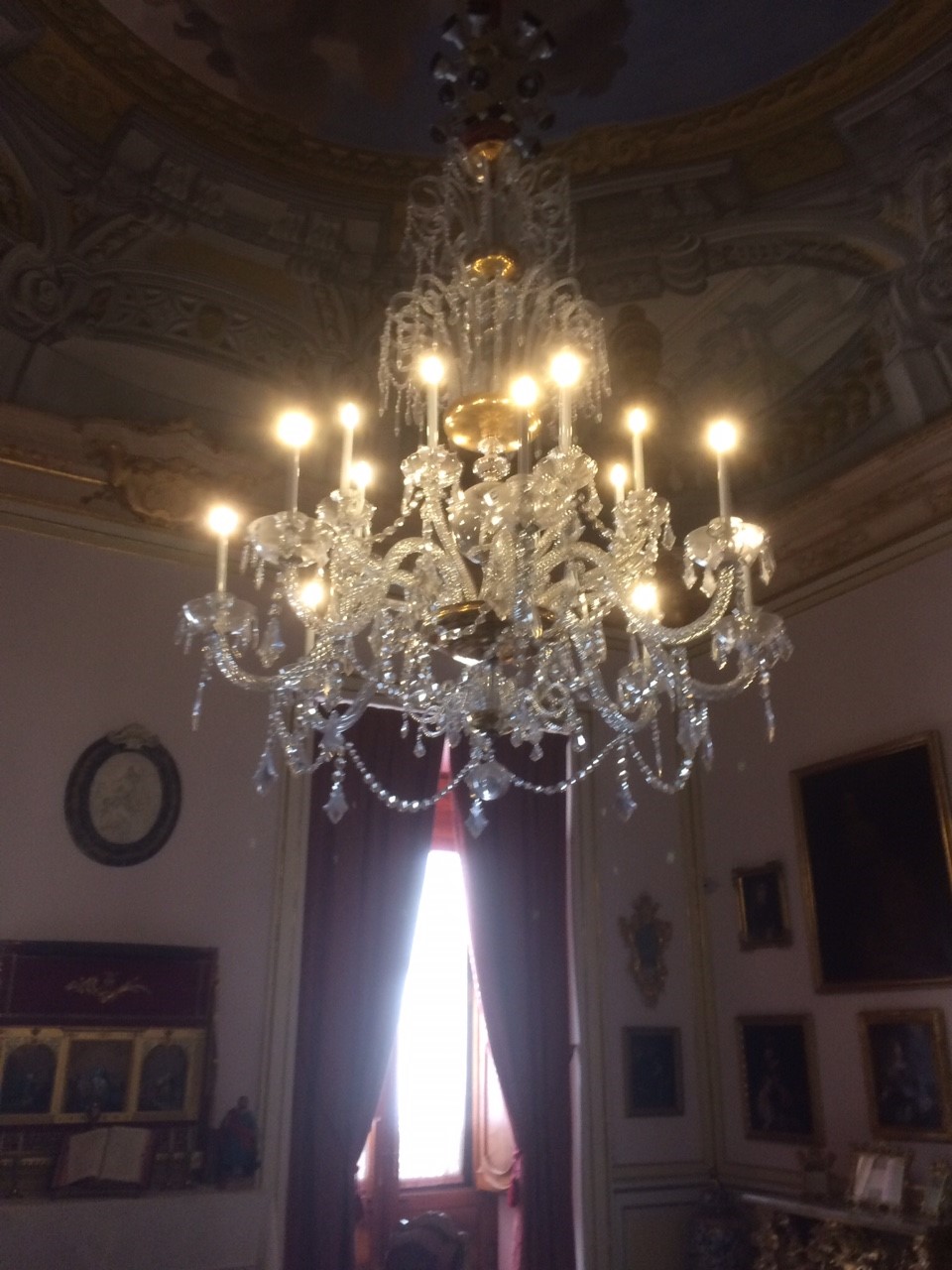 There would normally be the chance to view the Royal Bed – but as with so many other treasures in Spain, that has been nicked by Madrid and in its place a rather unimpressive 4-poster bed has been substituted, complete with very ordinary bedspread. This is what it is supposed to be: 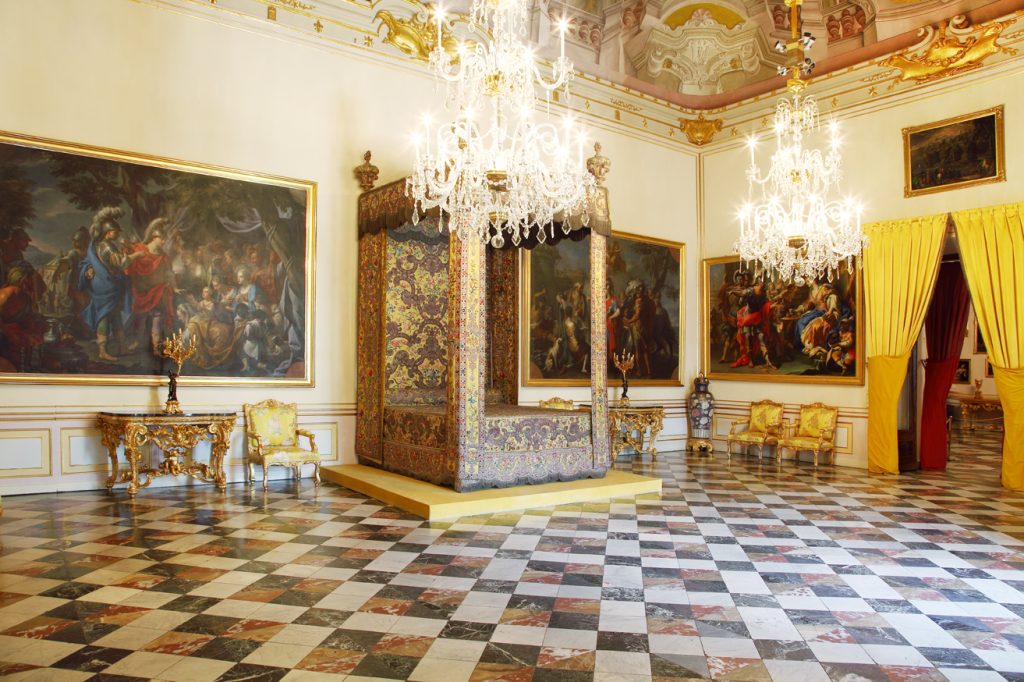 Ah well, the floor is still impressive, the Madrilanos weren’t able to roll that up and take it away! The dining room, shown next, was also impressive, and indeed practically all the rooms, bar one, have amazing plasterwork ceilings. The one exception was a room destroyed by fire in 1918 – now fully restored, but with a completely plain ceiling, which I cannot be bothered to show! 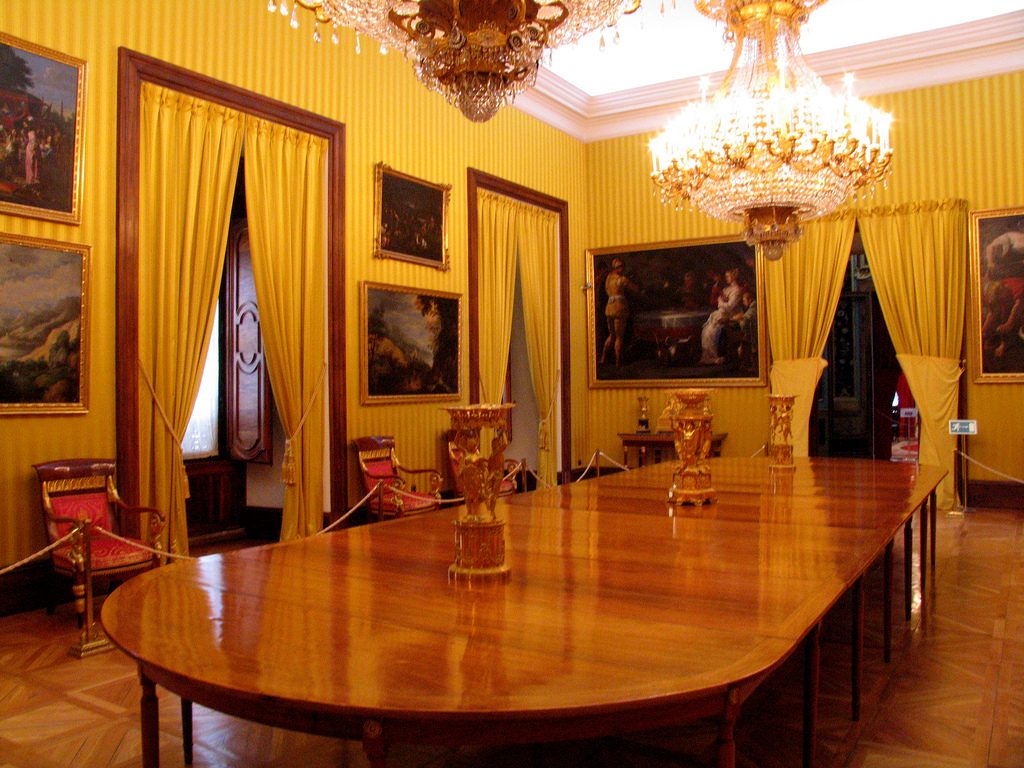 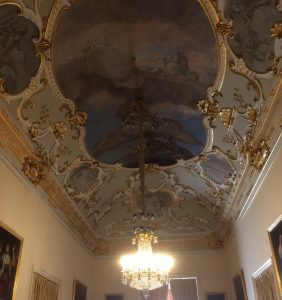 Apparently the King, Philip V, intended to retire to this summer palace and use it as a retreat but in 1724 his son went and died, so the retirement idea had to be put on hold and what had been a much simpler edifice just grew and grew as it became a full-time centre of government. 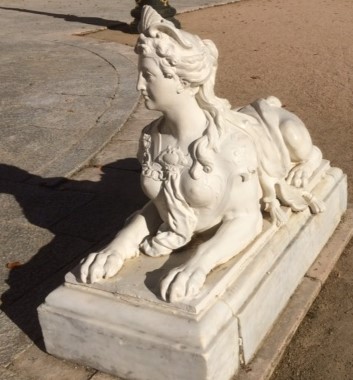 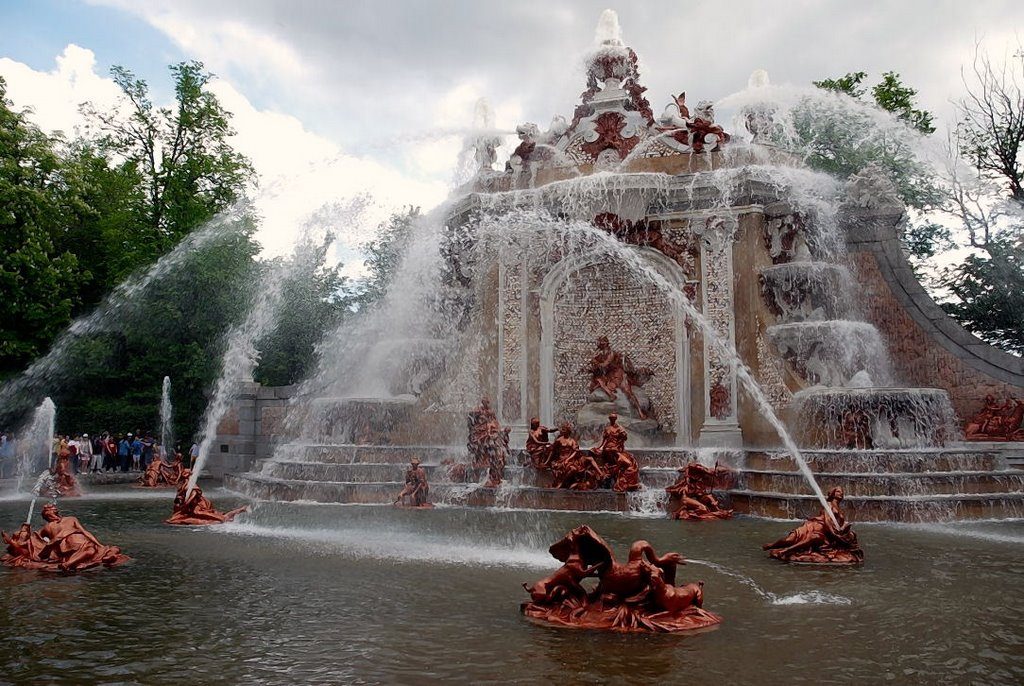 It really is well worth a visit – and if you do go, try and stay at the Parador a few hundred yards away – it is a fascinating building, one of many in the town where exterior details have all been stencilled in, from window shutters to pediments, from columns to niches and statuary, complete with dark edges on one side to show ‘shadow’.

My thanks to Wikipedia for the first three pictures, and for the fountains at the end of this post. All the others I took myself using my wife’s phone …. I never can get the hang of new technology!