In my previous post I explained that Lady Sarah Archer was widowed at the age of 37 when her husband Andrew, 2nd Lord Archer, Baron of Umberslade, died on 18th April 1778 . She was left to bring up three (possibly four) teenage daughters, She had no inclination to re-marry (why would she: if she remained a widow she kept her late husband’s money; if she re-married all control would pass to her new husband).

She had expensive tastes – she was a keen horsewoman, she ran a fine carriage and set of matching greys, and as I showed previously, she had a gambling habit to make the eyes water. Her daughters simply could not wait to escape her clutches, and her sixteen year old daughter the Honourable Sarah Archer (born 19 July 1762) wasted no time in becoming the wife of the 5th Earl of Plymouth. He rejoiced under the name of none other than Other Hickman Windsor. Their marriage took place on  20 May 1778 (one month after her father died)and gave rise to this fascinating trio of cartoons, shown on the British Museum site. 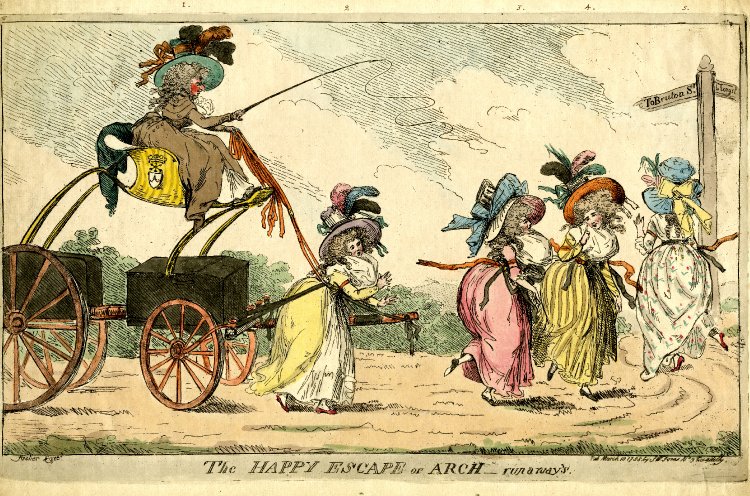 In the first, entitled ‘The Happy Escape or Arch-runaways’, Lady Archer is shown whip in hand driving her high phaeton, but drawn not by the four greys but by her four daughters. Three have slipped their reins and are running off, leaving one in harness. The Museum description gives us “Lady Archer, an angry harridan, slashes her whip at the runaways. On the side of the gig is an ‘A’ in an escutcheon surmounted by three crossed arrows and a baron’s coronet. On the extreme right is a signpost, one arm of which points ‘To Longsl . . . .’ The other, in the direction which the daughters are taking, ”To Bruton St.’ All the ladies wear the broad-brimmed hats with high circular crowns which had just become fashionable. Lady Archer wears a driving-dress with a triple cape and a large shirt-frill. It is dated 19 March 1788.”

According to the Museum the daughter still in bondage is Harriet. The leader of the pack of runaways (shown in back view) is Maria, the next Anne, and the last is Sarah Archer. 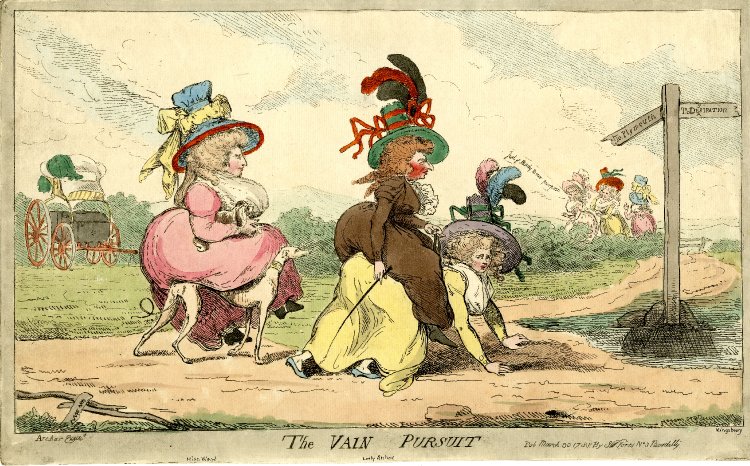 It shows Lady Archer riding astride one of her daughters, using her whip to lash her backside, while her rather stoutly-built sister Miss West accompanies her, holding a poodle and riding a greyhound. The abandoned high phaeton appears in the background, while on the roadside, behind the hedge three fugitive daughters are in hiding. The front one says “Just & steady to our purpose”. The sign post points towards Plymouth (as in the Earl) and to Dis(s)ipation. The print appeared ten days after the first one was published.

The third in the trilogy is dated 1st May 1788 and is entitled ‘So, so, the Race was for a Husband.’ It shows a somewhat obese Earl Plymouth escorting  Hon. Sarah Archer with his arm in hers as they walk along a path towards a country church.  In the porch are the vicar and his clerk. Plymouth says:
‘See the Vicar waits to Join

Plymouth to Archer all Divine’
She replies:
‘Let us now to Church repair

Hymens bonds I had rather bear

Than a Mothers surly care’
Her two sisters walk immediately behind them, hand in hand.   On the extreme right Lady Archer,  walks off saying:
‘You may go if you will

For I shall have my fill

Of Mirth & of Pleasure

Without End or Measure

So take your own way’

The trio of prints clearly show disapproval of Lady Archer’s maternal skills – someone who had tyrannized her daughters and was largely indifferent to anyone’s happiness other than her own. In fact her daughter Sarah had three children by Plymouth, and following his death she married William Pitt Amherst, 1st Earl Amherst of Arracan, and had four more children by him. She died in 1838

Her sister the Hon.Maria Archer married Henry Howard , on 4 November 1788. She died exactly one year later. The other sister Harriet married Edward Bolton Clive in 1790. 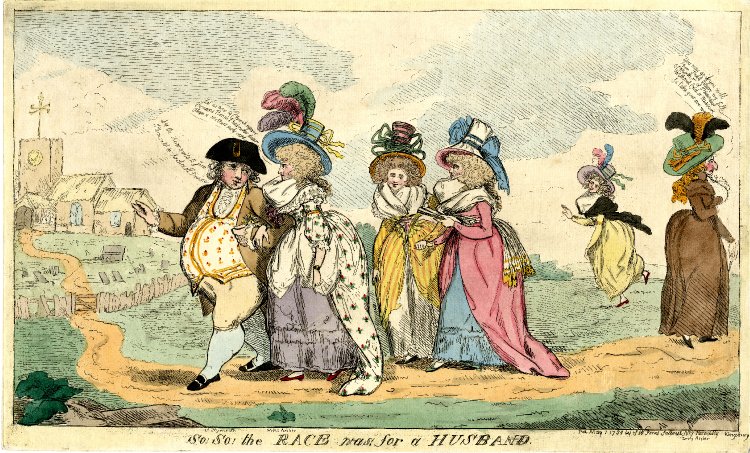 In my next post I will revert to the mother’s gambling addiction, and to her connection with the death of poor Mr Weston…

7 Responses to “Lady Archer, definitely NOT winning ‘Mother of the Year’ Award”