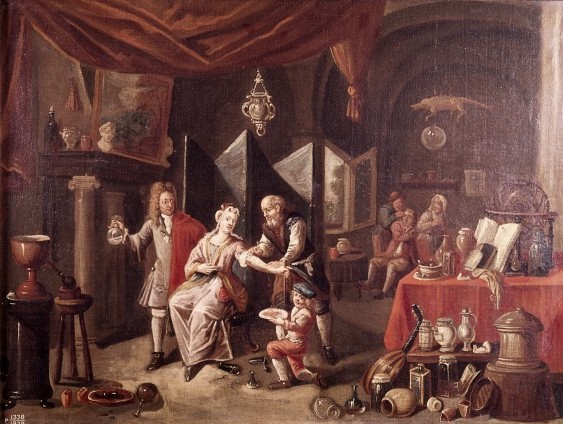 Picture of a woman being bled, early 1700's, by a Flemish artist

There is no other way of putting this: Richard Hall enjoyed ill health. He was a worrier,a hypochondriac, and was always being treated for his nerves, for his digestive problems and so on. I still have his prescriptions e.g. for ‘a Chalybeate Medicine’ (indicating an iron deficiency). He also on one occasion had an incision made behind his ear, a dried pea inserted and his ear was then bandaged up for a couple of days, so that a blister was formed. The pea was removed along with the “humorous liquid” and no doubt the doctor went away well paid and happy.

As often as not the doctor recommended blood-letting. Usually this involved leeches being applied to the skin. Collecting the leeches from the streams was a job for women – as seen from this print dated 1814. (Incidentally, all the images in this post come from the Wellcome Library, who have an excellent catalogue of (sometimes!) gruesome images on their website here). 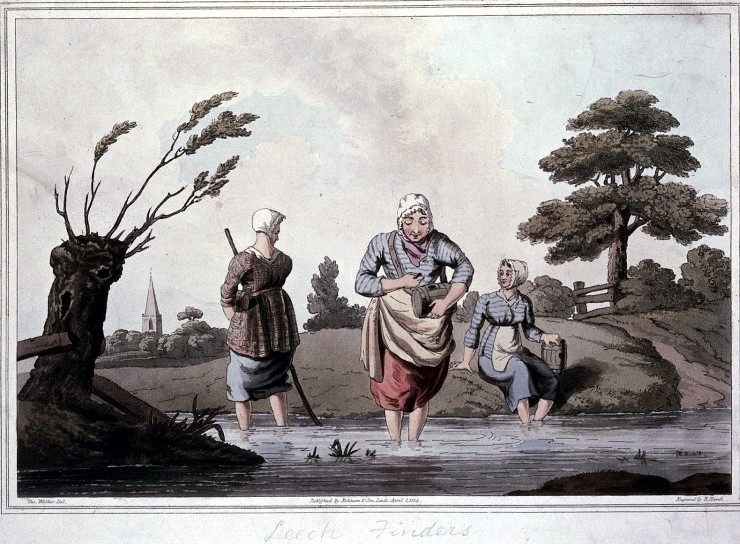 Although the print is titled Leech Finders I suspect that in fact the ladies took off their shoes and stockings and waited for the leeches to find them!

The leeches would then be sold on to pharmacists, who would keep them in jars like the one shown here. The top is held in place with a clasp, and contains tiny air holes so that the leeches could breathe.

The actual leech is a type of worm. It has suckers at either end enabling it to fasten on to a suitable host, and once in place they would then gorge themselves until full, when they would fall off. Nice little pets…

I remember that in the village where I grew up there was an old family doctor (who had brought both me and my father into the world). He was in his eighties, still practising medicine, and he explained to me that in the 1920’s he used to prescribe leeches. Apparently the pharmacy kept them in rotation: the ones fed most recently were the cheapest, whereas the really hungry ones cost the most! And yes, I am aware that leeches are still used occasionally by doctors, for instance after plastic surgery. Leech saliva apparently contains compounds which reduce pain, prevent clotting and dilate the blood vessels. In 2004, the US Food and Drug Administration cleared the use of medicinal leeches for wound healing, limb reattachment and reconstructive surgery, and they are  also employed to treat arthritis, blood clotting disorders, and varicose veins.

The alternative was to use a scarificator like this little number with six lancets which would dig into your arm (or wherever it was applied) and soon get your juices going. Just don’t even think about cross-infection or contamination!

One can only imagine the debilitating effect of blood-letting on someone already feeling poorly.

I was rather taken with this cartoon showing a doctor treating the Bishop of Durham. It dates from 1791 and shows the good medic deserting his patient, who is sitting in his episcopal chair, in order to treat a horse. 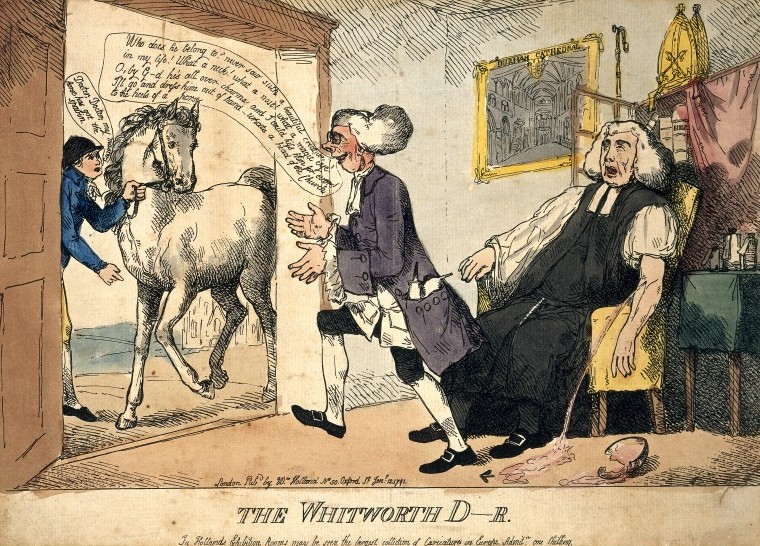 The jockey is saying that this horse has spavin (in other words has gone lame as a result of osteoarthritis in the lower hock joint). Gleefully the doctor exclaims “Who does he belong to. I never saw such a beautiful creature. What a neck! What a nose! What a magic eye….I will go and dress him out of hand. What’s the Head of the Church to the head of a horse.”  The poor bishop meanwhile looks set to expire, blood spurting from his lower arm…

4 Responses to “Leeches and blood-letting!”