The year was 1792; down in darkest Cornwall an amazing first was about to be achieved by a little known mining engineer called William Murdoch (sometimes the spelling was Murdock). He had been working in the local tin mines overseeing the new Boulton and Watt steam engines, so he was pretty used to dark conditions. He experimented with coal-gas and ended up with a new form of light which was to revolutionize the way people lived and worked. In that year he became the first person to illuminate his house in Redruth with gaslight. 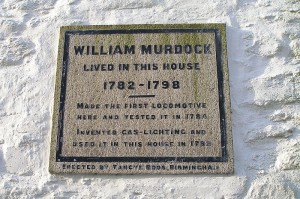 From there he took his invention to the Boulton factory at Soho in Birmingham, installing factory lights in 1786, thereby enabling workers to operate their machinery even in winter darkness, and later, in  longer shifts and night work. In 1802 the factory lit the new-fangled gas light in an outside display, much to the astonishment of the local residents.

The light was somewhat primitive – the gas mantle would not be invented for another hundred years but improvements came thick and fast. In particular a German inventor called Friedrich Albrecht Winzer (or, as he is better known in our country, Frederick Albert Winsor) helped pioneer the development, and patented the first gas lamp in 1804. 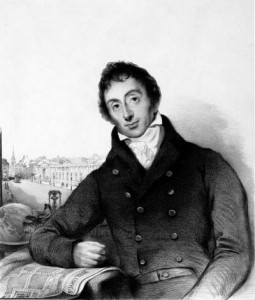 In 1804 Winsor demonstrated the gas light as a way of lighting the stage at London’s Lyceum Theatre. A short time afterwards, on 28th January 1807 he amazed the good people of Pall Mall in London by igniting the world’s first gas-lit street lamp. It was far more effective than earlier oil lamps, or candles. The lamps also proved to be far cheaper to operate, with running costs 75% less than available alternatives.

Winsor went on to form the Gas Light and Coke Company, incorporated by Royal Charter in 1812. It became the first gas producing company in the world. Winsor appointed as Chief Engineer one Samuel Clegg, who had been part of the Boulton team at Soho. He was a great innovator patenting something (which sounds obscure and therefore impressive) called the horizontal rotative retort in 1816 – an apparatus which purified the coal-gas with cream of lime. He also developed the self-acting governor and went on to develop the first credible gas meter for measuring consumption. Next time you get your gas bill you will think nicely of Mr Clegg, won’t you?

By the end of 1813 Westminster Bridge would be illuminated by gas and by the end of the decade over 300 miles of gas piping, supplying over 50,000 burners, had been laid beneath London’s streets. This thereby established a tradition of digging up lengths of the public highway, causing maximum inconvenience to pedestrians and road users alike. The Gas Light and Coke Company was indeed the forerunner of British Gas. 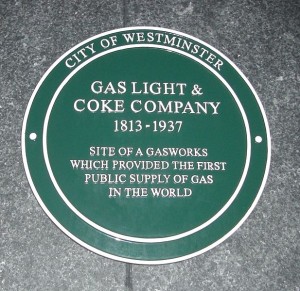 Meanwhile across the Channel a Parisian named Phillipe Lebon had been experimenting with gas lighting since the turn of the century. His house and gardens were illuminated in this way in 1801. By 1820 Paris had adopted gas street lighting. Back in England the gas lighting industry really took off and within a few years most large towns were lit by gas, partly because of the cost-benefits and partly because the light emitted by the lamps was far superior to other alternatives. Introduced into the work place and private homes the new lighting facilitated a boom in literacy. It also spawned around a thousand gas works throughout the country by 1859.

When the gas mantle was introduced into theatre-land in 1885 it involved a small bee-hive shaped woven element impregnated with lime. Burning the gas though this meant the actors were …. in the lime-light. Nevertheless, safety interests meant that once Thomas Edison invented the electric incandescent lamp in 1879, theatres and public buildings quickly adapted to electric lighting. Oddly enough I can remember buying a house in 1980 which had not been renovated for over a century, and there in each room was a small gas lamp (and no other form of lighting). Sad to say, I ripped them out and brought in electricity…but such is progress!

Around 1600 gas lamps still remain in use in London – mostly in areas where the nostalgic and  historical feel is deemed important such as outside Buckingham Palace, in the Royal parks and in almost all of the area around Covent Garden. At night a small army of workers are still to be seen polishing the glass globes, checking the pilot lights, and making sure the mantles are not carbonising.

7 Responses to “Let there be light!”