Let’s have another visit to the ball: the 18th Century masquerade

One of the phenomena of the Georgian era was the popularity of the masked ball. It appealed to all social classes, and people did rather more than just put on a ‘Lone Ranger’ pair of eye-goggles; they dressed up as clowns, shepherdesses, allegorical figures vegetables – whatever took their fancy. They cross-dressed, and, liberated by their apparent anonymity, abandoned all propriety and sense of inhibition.

Probably for that reason they were often frequented by prostitutes on the pull. Which is where my interest came in, because I had been looking  at masquerades in context of my book “Sex, Scandal and Satire – In bed with the Georgians”. 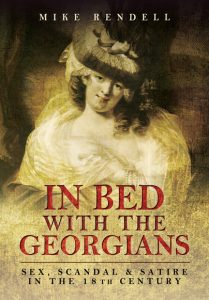 The image at the top comes from the ever-excellent Lewis Walpole Library site, and shows all the principal characters at a masquerade in 1789 at the Rotunda. As you can see, the people attending theses balls went to a lot of trouble with their costumes. The same site gives us “The Beauty Unmask’d” (left) and “Lady Betty Bustle and her Maid Lucy preparing for the Masquerade at The Pantheon” on the right. 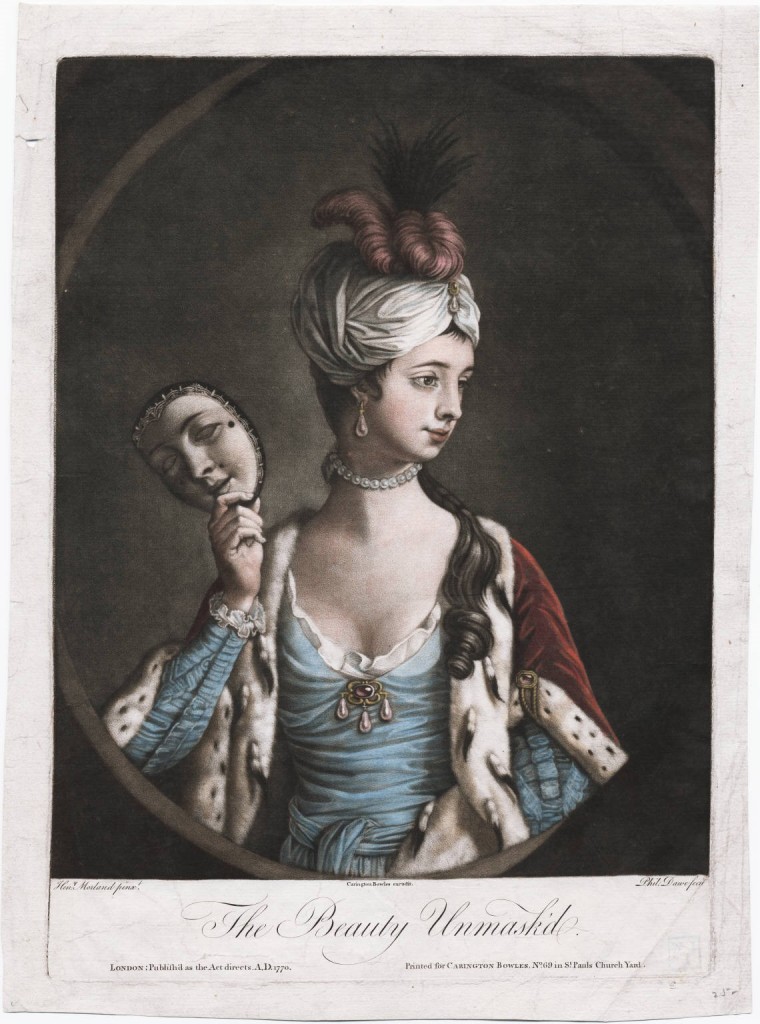 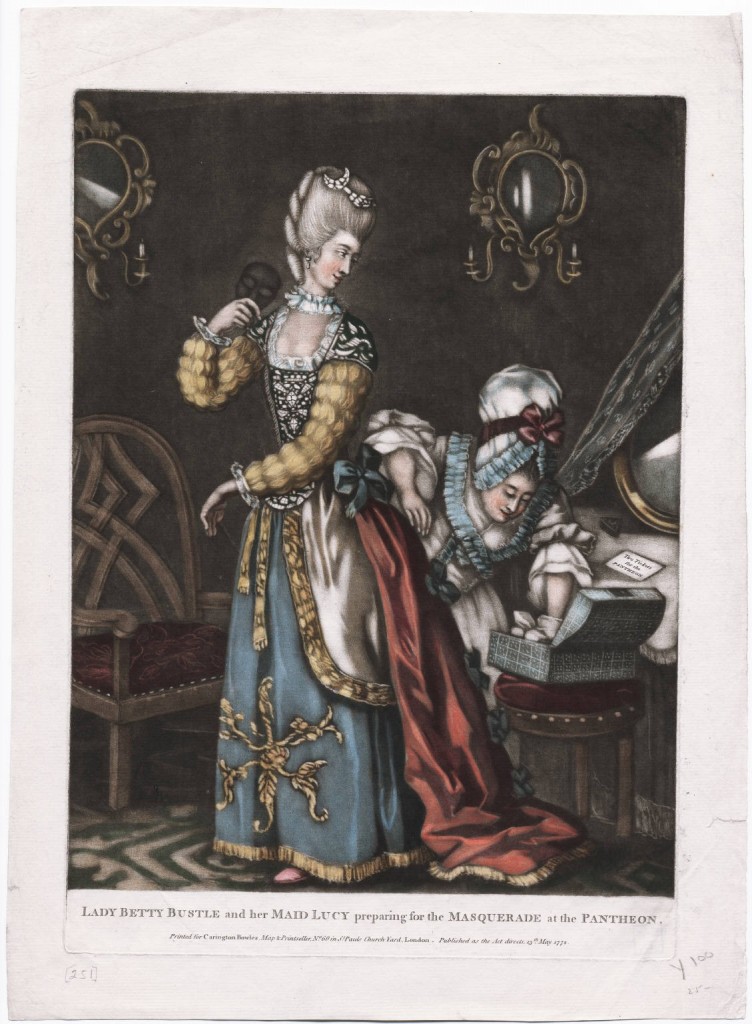 The one on the left, with her ermine-lined cape, dates from 1770, and the elegant lady dolled up to the nines on the right is from two years later. Somehow I don’t see them as bestowing their favours on the young gallants for less than a fortune. On the other hand, this one from the British Museum site, is clearly ready for a bit of horizontal jogging – her swain has already removed his mask and is absolutely sure that he is on to a good thing. It dates from 1771. 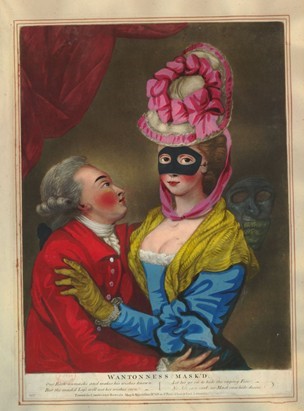 As the verse underneath puts it, ‘Our Buck unmasks and makes his wishes known, … No Art can curb, no Mask can hide desire.’

Here is a more ‘tasteful’ image, once more from Lewis Walpole, showing a masquerade at the Argyll Rooms in 1826: 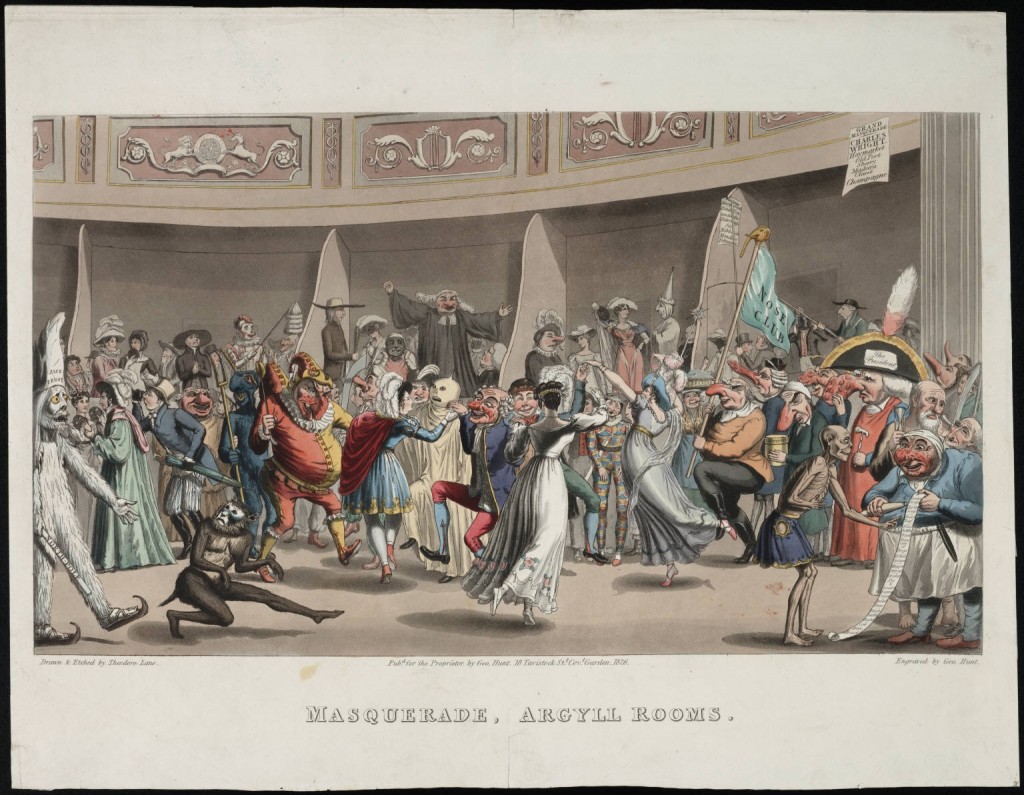 It all seems a bit staid to me, so to end with, a view from the raucous, joyful, over-the-top Thomas Rowlandson in his 1790 picture entitled “Dressing for a masquerade” 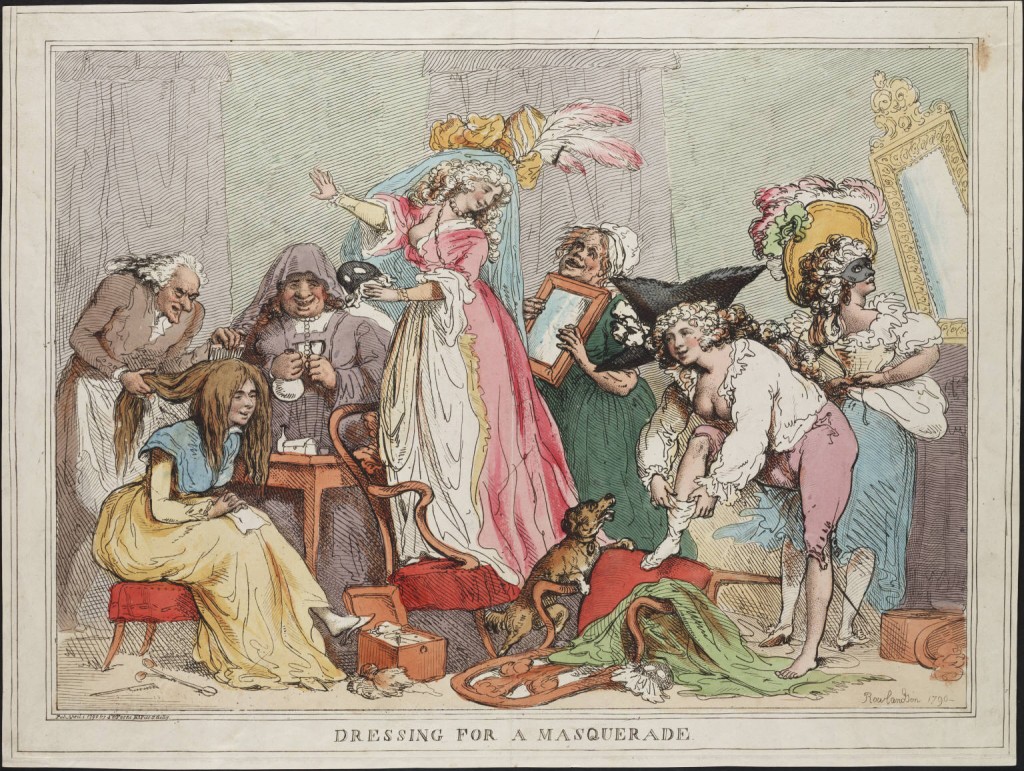 A group of happy hookers are getting ready for the ball, decolletages to the fore. I love all the action, with the hairdresser, the maid holding up a mirror, the stocking being rolled up, the masquerade head-dress with its discreet veil, and the dog barking at all the excitement. The masked lady on the right is gazing at her reflection as she struggles with the lacing on the back on her outfit, and as ever with Rowlandson, the figures are either rather beautiful or incredibly ugly!  Somehow you know that their evening will revolve around pleasure – and that someone is going to have to pay for it!