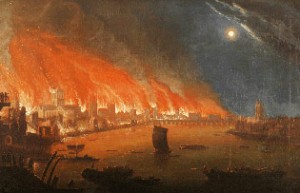 The shadow of the Great Fire of London remained throughout the whole of the Eighteenth Century – and my ancestor Richard Hall recorded every single major outbreak of fire within the boundaries of the City of London during the time he lived there – usually with the heart-felt prayer that the Lord in his Mercy had spared him. Obviously people were easily rattled, and small wonder when you think that the blaze in 1666 destroyed 13,200 buildings, and left thousands of households with debts which crippled them financially.

Out of the ashes of the Great Fire grew a system of mutual insurance – members of coffee houses clubbing together to form groups which employed a brigade of workers to look after their properties and to put out fires when they broke out.

On the 12th November 1696 a number of enterprising individuals gathered together at Tom’s Coffee House in St. Martin’s Lane, and formed themselves into a society for the transaction of fire insurance business on a mutual basis “having for their sole object the benefit of the insured” 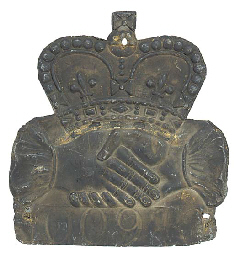 The society adopted as the emblem for its fire mark “Two hands clasped with a crown over them, a symbol of friendship and good faith”” Because of this it was not long before the society was affectionately known as “The Hand-In-Hand”, and this was adopted as the official name of the company in 1706. The fire marks was usually made of lead stamped with the name of the insurer, and bearing an identification number. They were placed high up on the front wall of a building (hopefully high enough out of the way to stop unscrupulous people stealing them and putting them up on their own houses…). The point here is that these private insurance brigades only put out the fires of their own members, and a visible badge on the outside of the building was the best way of ensuring you were protected. It was of course also  a good advertisement for the insurer…

A second insurer, formed in 1714, was closely linked to the Hand-in-Hand, and was known as the Union Fire Office. It had as its fire mark a symbol of four clasped hands. The companies were associated, with more than one director sitting on both boards. They agreed a non-competition pact whereby the Hand- in-Hand would cover buildings, and the Union the contents. This arrangement lasted until 1806. In turn, their brigades would help put out each other’s fires.

This then is the background to Richard Hall’s diary entry recording the insurance arrangements for his shop premises at One London Bridge: 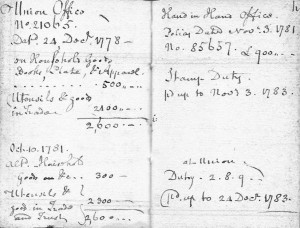 It confirms (right hand side) that the building was covered in the sum of £900 with Hand-in-Hand and that the Household goods in 1778 were covered by the Union Office for £500, and Utensils & Goods in trade (stock, etc) £2100. Two years later Richard moved his own items of furniture from the house above the shop, reducing the value of the  household goods to £300. At the same time his son William appears to have increased the amount of stock carried in the Haberdashery Shop downstairs,and cover for stock etc rose to £2300. 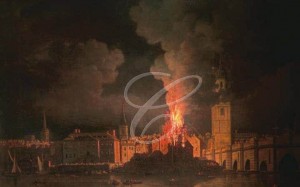 It is just as well he was properly covered since his diary entry for the last day of October 1779 recorded the scary news that a fire had broken out in the Hop warehouse next door. The fire spread, forcing Richard and his family to evacuate to the safety of St Magnus the Martyr Church, across the road. They must have watched in horror as the flames burned the warehouse to the ground, along with the water wheel on the banks of the Thames, which daily had pumped water to the wealthy families of the neighbourhood. The scene was recorded by a contemporary artist (picture courtesy of the Guildhall Library). 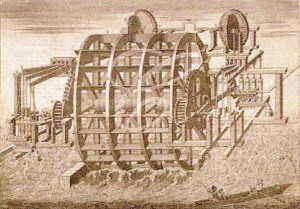 It is ironic that the destruction of the water wheel must have made it even harder for the fire crews to tackle the blazes which broke out elsewhere in the city on later occasions. In many case bucket brigades were the only way of tackling fires – teams of men employed by the insurance companies and backed up by volunteers lending a hand in return for beer tokens.

The actual buckets were made of leather, as were the hoses, stitched together to form a flexible tube. These tubes were joined together with brass fittings every fifty feet in length.

There were early  fire engines – capable of sending a water jet up to 36 metres and dispensing nearly 400 litres of water a minute. The original patents for such a machine were granted to Richard Newsham in 1725 and 1735. The engine used a twin cylinder single acting pump equipped with an air chamber.  Water was provided by a bucket brigade which emptied buckets into the hopper at the engines rear.  The engine also came with a suction fitting which could draw water from a cistern or other water source.  I was pleased to see that one of the oldest surviving examples (1745) is to be found in Devon at the South Molton Museum:

Known as “bed posters” they required teams of sixteen men to pump the  side bars and to keep the open tank (holding 640 litres of water) topped up.The South Molton example cost £46 (equivalent to £4000 today), and it is safe to assume that a machine very similar to this would have been wheeled round to One London Bridge on the night of 31st October 1779. Richard’s premises remained intact, and no-one was hurt. 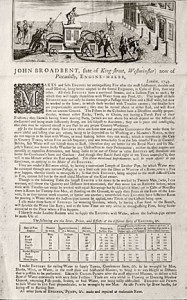 These fire engines were widely advertised, as in this Broadsheet issued by James Broadbent in 1743. Some of the machines were specifically designed to be narrow enough to be pushed along corridors, but by and large  firemen were forced to try and contain fires from outside the building. Once a fire had taken hold, there was little the fireman could do other than contain the flames and stop them from spreading, and to salvage goods in order to minimise the cost to the insurer.

The Newsham machines were widely used both in England and in America.When Newsham died in 1743, the manufacturing company passed to his son, Lawrence. After Lawrence’s death, his wife took over and joined forces with her cousin George Ragg. The machines that used Newsham and Ragg pumps were still in use in the late 1930s.

The London brigades were often made up of twenty or thirty casual labourers, usually recruited from the free watermen or ferrymen on the Thames. They were paid a retainer and given distinguishing uniforms by the Insurer. Porters would also be drafted in to salvage goods. It was not until an agreement was reached between a group of ten London insurers in 1833 that they finally agreed to tackle each other’s fires, and not just to protect their own insureds.

Parliament had passed the Parish Pump Act in 1708 requiring each local authority to provide and maintain a pump for use by local brigades. Most cities had their own insurers, since it was not practical for brigades to travel from one town to another.

These are examples of early Norwich Union and Bristol fire marks: 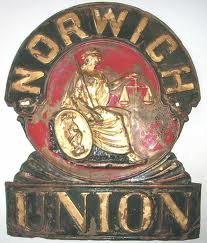 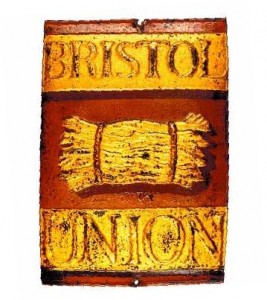 4 Responses to “London’s Burning…fires, fear, and insurance in the 1700’s”