Today is the anniversary of the death of Louise Élisabeth Vigée Le Brun, in 1842. By the time of her death she was something of a relic from a bygone age, all things rococco, the neo-classical, and a world always associated with Marie Antoinette. I love her use of colour.

She had been born in 1755, the daughter of a painter who made a living producing portraits of the French nobility. She not only followed in Dad’s footsteps but achieved great fame as the portrait painter of the French Queen, painting Marie Antoinette on some fifty occasions. They had first met when both were 24 – the Queen had never been particularly satisfied with any previous portraits but in Le Brun found a likeness she favoured, and promptly commissioned Le Brun to prepare duplicates for gifts to members of the royal family. Over time Le Brun’s pictures of the Queen have meant that  it is these images which have become indelibly imprinted on our minds: think of Marie Antoinette and you are thinking of her through le Brun’s eyes.

She  painted the Queen in her ball gown (just look at all that fabric!) and it was given by the Queen to her mother the Empress Marie Theresa. 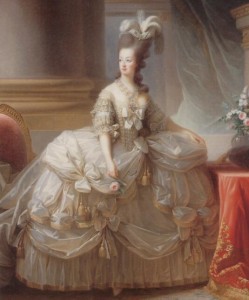 She also painted Madame du Barry, last mistress to the French King. She too was to go to the guillotine, on 8th December 1793 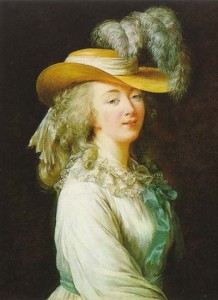 At the same time she painted other noble French heads – I rather like this one, a detail from her portrait of Charles Alexandre de Calonne.

In 1776, she married a prominent art-dealer Jeanne Baptiste Pierre Lebrun and in 1783 she was admitted to the French Academy of Arts. Forced to flee France by the Revolution she travelled throughout Europe, painting portraits as she went. Her fame grew as she travelled to Italy (1789-93), then to Vienna (1793-94), and then to St. Petersburg (1795-1802), where she also spent 6 very successful years painting portraits of Russian aristocrats. She was finally able to return to France when in her fifties, and when she died in Paris in 1842 she left a legacy of some 660 portraits and 200 landscapes. In particular she had chronicled the aristocracy of France before the world order came tumbling down.
She is buried in the cemetery of Louveciennes, near her old home. The epitaph on her tombstone  states “Ici, enfin, je repose…” (Here, at last, I rest…). She had indeed been a long while coming home.