Mary Darly, “mother of the caricature”. 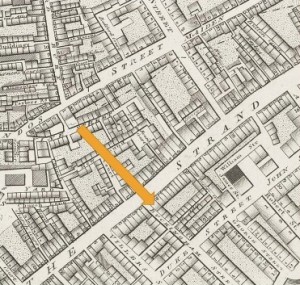 Walk down London’s Strand in the early 1770’s and you would not have been able to miss the crowds outside a print shop, under the hanging sign of a golden acorn – the print shop of Mary Darly at 39 The Strand, on the corner of Buckingham Street. It was the third such shop run by the husband-and-wife team (both signing themselves “M Darly” ) within a few hundred yards – the first was just off Fleet Street, and the second had opened in 1762 near Cranbourn Alley, Leicester Square.

The Darly’s played a prominent part in the birth of the caricature – they opened the doors which later exponents crashed through, including James Gillray. As early as 1749 Mathew Darley had been called to face a parliamentary committee looking into the subject of obscene prints. At that stage he had described himself as a “seal engraver”. In the fifties and early sixties the Darly’s dominated the print market, and Mary was central to the firm’s success, calling herself “the Fun Merchant, at the Acorn in Ryder’s Court, Fleet Street.”

Matthew appears to have had a training as a commercial draughtsman and he had previously been engaged in making architectural drawings and ceramic designs. Mary was one of the first female cartoonists and print publishers in the country, and together the Darly’s pioneered the print shop – a novelty which was quickly copied by others until the city appeared to have been awash with them! 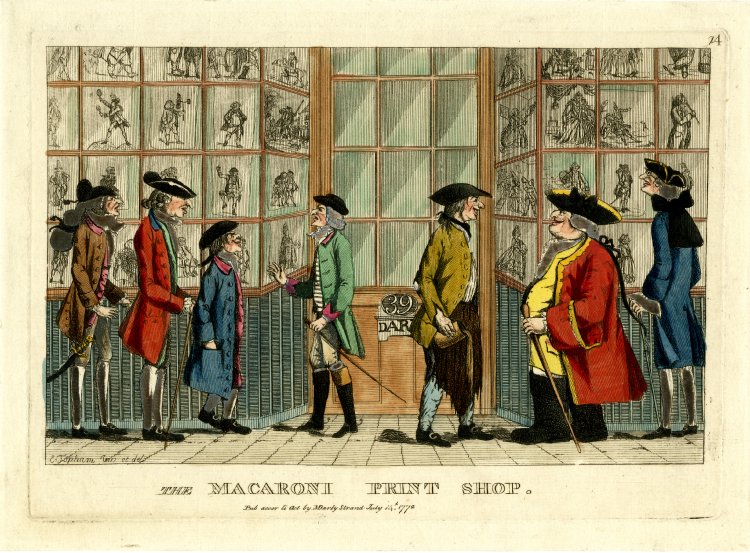 One of the earliest examples of a print of a print shop shows the Darly premises at 39 The Strand, and it gives a fairly clear example of what the exterior would have looked like, with prints displayed at every pane of glass so that onlookers could see the great and good being ridiculed before their very eyes. No need for a top shelf, when you could display your mockery for all to see…

Many of the early works, in the 1750’s, were fairly crude. But Mary developed the idea of producing small engravings with satirical sketches on them – the size of a playing card – which could be sent through the post. They became collectors’ items and from 1756 were then bound up and published as an annual review under the title of “A Political and Satyrical History of the Year.” Mary describes the political sketches as ‘caricatures’ – the first time the description had been applied in this way. 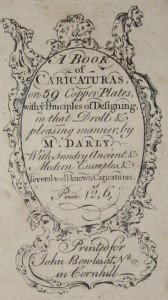 Mary also taught drawing and caricature-making to ‘suitable’ Ladies and Gentlemen, and in 1762 published the first guide book to the subject under the title of “A Book of Caricaturas, on 59 Copper Plates, with Ye Principles of Designing in the Droll & Pleasing Manner.” It contained just three pages of instruction, but also set out numerous examples of her technique. 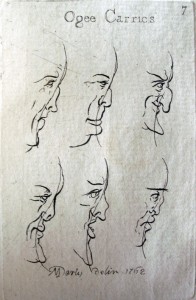 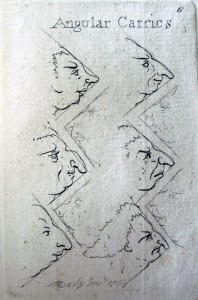 By 1770 the Darly hall-mark was associated with a series of prints ridiculing the macaroni. This was the absurd fashion statement for men which had grown out of the style adopted by young noblemen returning from Italy after the Grand Tour. They brought back pasta, and they brought back the fashion for high-fronted wigs with a tail (or “queue”) tied at the back. They wore tight trousers and large swagger swords – and quickly attracted copyists who became ludicrously foppish figures. Had I met one in the street I would no doubt have yelled a suitable insult such a “French dog” – and gone off to buy one of Darly’s prints. They came out as six sets over as many years, each containing 24 plates, and proved to be incredibly popular – and, presumably, profitable for Mary Darly. 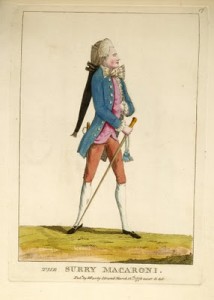 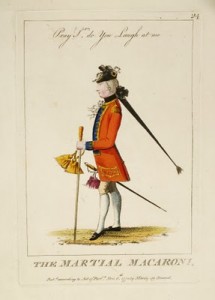 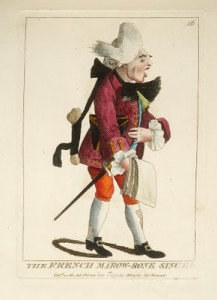 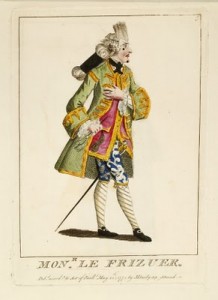 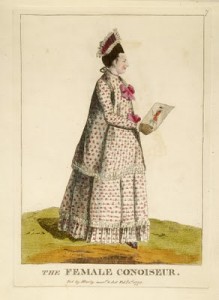 It was to prove to be Mary’s swan-song as others moved into the limelight, and she closed her Strand shop in 1779. Her last engraving appeared in 1781 and it is quite possible that she sold her stock to the brother-and-sister team of William and Hannah Humphrey. They re-issued some of the stock – and also offered employment to the young James Gillray (some believe that he had produced his first drawings for Mary Darly).

So, for a quarter of a century the Darly’s had dominated the London print shop scene. It was just before “the Golden Age” of satire, but the Darly’s helped it happen, and for the crowds gawping at the print shop window in 1772 it would have been an astonishing sight.

To end with, another print showing another Caricature Shop, this one belonging to Mr Roberts…

4 thoughts on “Mary Darly, “mother of the caricature”.”