There is no escaping the fact: Richard’s eldest son William was a bit of a hooligan. As it happened he turned out O.K. in the long run, ending up as Master of the Worshipful Company of Haberdashers, but, as a youngster, he was by all accounts a feral child!

Poor Richard’s diaries are full of entries about having to pay for mending glass windows in passing carriages, broken by William throwing stones! Time and time again Richard seems to have been forced to take the boy out of one school or another because he was a trouble maker. I bet Richard must have had second thoughts about taking William on as an apprentice when the lad reached fifteen…

Every school holidays the young William had been packed off to the country, where the air was healthier. Usually he stayed with his aunt and uncle at Bourton on the Water but presumably his boisterousness tired his relatives, as evidenced by this elaborately written invitation: 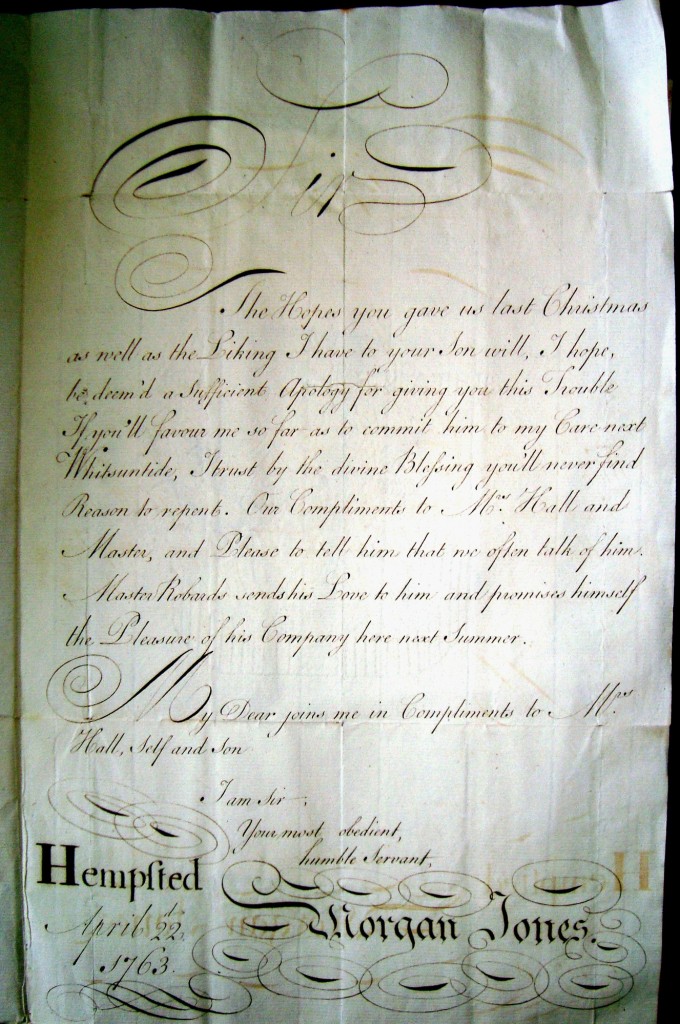 The letter is written from Hempsted, then a small hamlet situated just South West of Gloucester, and barely half a day’s horse-ride from the rest of the family who continued to stay at Bourton. It would appear that young Master William, aged 8 at the time, spent Christmas with the Morgan Jones household. I imagine that they were happy to supplement their income by taking in a lodger to keep ‘Master Robarts’ company. I know nothing of Master Robarts but the inviation to send William back to stay with the family at Whitsuntide was presumably taken up, and Richard filed the letter with his other papers.

The writing really is beautifully done. It is only a guess, but I suspect that Morgan Jones may have been a legal clerk in a Solicitor’s Office in Gloucester, because his hand is so reminiscent of contemporary legal documents, especially with the emboldened writing and curlicues around the signature.

I have to think that life in the country must have seemed like heaven to young William – how he must have dreaded returning to London, and to school, which he loathed!

4 Responses to “Master William Hall, a tearaway packed off to the country…”