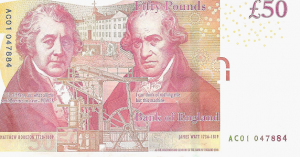 It isn’t often that a fifty pound note comes into my possession but looking at one reminds me of the partnership which propelled Britain through the Industrial Revolution – the association between James Watt and Matthew Boulton.

Of the two partners, James is the better known, but Matthew was a hugely important figure, with his factory in Soho on the outskirts of Birmingham.

Matthew was an exact contemporary of my ancestor Richard Hall, having been born  on 14th September 1728. His father (also called Matthew) was a buckle and button maker and the younger Matthew followed his father into the family business in 1745. He married Mary Robinson four years later but tragedy struck in 1759 when both his father and his wife died. The following year he married his late wife’s sister (Ann) and in 1768 they had a daughter, followed a couple of years later by a son. The decision to marry his late wife’s sister was not without controversy – it was not actually illegal but it was against ecclesiastical law and there is a suggestion that Matthew had to bribe a clergyman to conduct the ceremony. The controversy prompted him to advise someone else he met,  and who was contemplating marrying the sister of his recently deceased wife, “I recommend silence, secrecy…. and Scotland”

The Soho Manufactory, demolished in the 1860's

Boulton was an ambitious businessman and in 1761 signed a lease of 13 acres of land at Handsworth. It included Soho House which had been constructed in 1757 and Boulton quickly developed the land by building the Soho Manufactury. It specialised in making jewellery, silverware and decorative knick-knacks and these were exported throughout Europe. 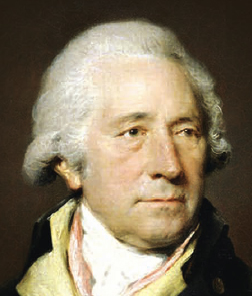 Boulton was one of the Founder members of the Lunar Society, a group whose members included such eminent ‘movers and shakers’ as Erasmus Darwin (grandfather of Charles), Joseph Priestley and Josiah Wedgwood. Another member was James Watt, with whom he went into partnership in 1775 making and selling steam engines, in particular to mine owners.

Gas pioneer William Murdoch was also a member. I did a post about him on 9th January. Murdoch had  caused a commotion by illuminating Boulton’s factory with gas lights, for the first time enabling workers to operate in shifts  around the clock. Ironically the Lunar Society got its name from the fact that it met every time there was a full moon – because it made for easier travel home after the meetings. Not that it mattered to Boulton since meetings were held at Soho House, which he remodelled in 1790.

Other notable events in his life  were in 1773 (when the Birmingham Assay Office was opened at his instigation, giving a huge boost to the manufacture of silver goods in the Midlands) and in 1785 when he was elected as a Fellow to the Royal Society. He had strong connections with the theatre, becoming chairman of the Birmingham Theatre Proprietor’s Committee in 1794. Meanwhile his insurance scheme, which from the 1770s provided assistance for his workers in times of sickness, became the model which others followed. He invested money in  the burgeoning canal network, and helped to contribute to the astonishing feat whereby Birmingham, a landlocked town, became a pre-eminent industrial city and port.

A pattern of what became known as the cartwheel penny, dated 1797, courtesy of Spink.

He was made High Sheriff of Staffordshire in 1794 and three years later was awarded a contract by the Royal Mint to mint copper coinage. The results were a triumph for Boulton – he demonstrated the power of the Boulton and Watt engines by striking the coins (pennies and two penny pieces) with the inscription incused i.e. set into the rim as opposed to being left raised.

A pair of ormolu antique candle vases made from Carrara marble by Boulton in 1770 courtesy of the website of Jeremy Ltd at http://www.jeremy.ltd.uk/index.htm

His range of manufactured goods was impressive – swords and decorative ormolu items and fancy silver goods were his mainstay. His factory became so famous it became a tourist attraction in its own right, with a tea room opened to cater for the demand.

The minting of the coins involved lapping and polishing the metal blanks and one of the original machines, known as the Lap Machine, is exhibited in the Science Museum. It had been in use from 1788 to 1858. 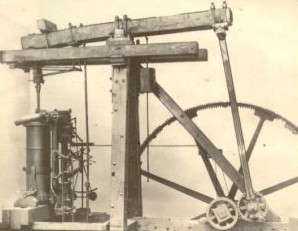 As well as manufacturing  coins the factory supplied whole minting presses to overseas governments (such as  Imperial Russia) and when the Royal Mint was moved from the Tower of London to its new premises nearby, it purchased Boulton & Watt machinery.

Matthew Boulton died at Soho House on 17 August 1809 of kidney failure. His partner James Watt outlived him by a whole decade but when he too died he was buried alongside Matthew Boulton in the churchyard at St Mary’s Church. Theirs was indeed a partnership which lasted an eternity…

What better  way to remember him than by quoting the words of a Mr J.H.Reddell who wrote to Matthew Boulton in 1800 “Methinks Public gratitude should erect a Column to the memory of the First engineer, Artist and manufacturer that ever existed whose Ingenuity and perseverance enriched his Country beyond the powers of calculation; and the place should be called Boultonia, or Boulton’s Town.”   Well, maybe that is a bit O.T.T., but you get the picture! Instead he is commemorated in a stamp and a medal… 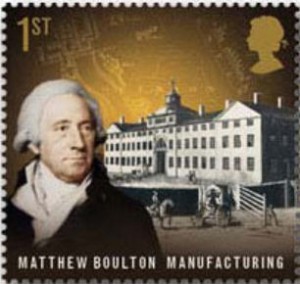 The First class stamp commemorating the bi-centenary of his death in 2009. 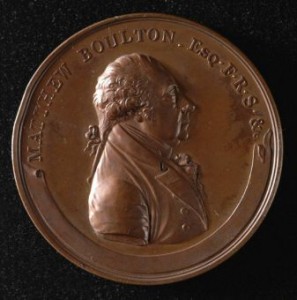 2 Responses to “Matthew Boulton – the ultimate man of power”