And no, the internationally recognized distress signals has nothing whatsoever to do with the first day of May: it is a deliberate corruption of the French expression ‘venez m’aider’ (‘come and help me’) having been chosen in 1923 by a senior radio officer by the name of Frederick Stanley Moxford. He wanted a word that would indicate distress and would easily be understood by all pilots and ground staff in an emergency at his local airport (Croydon). It was soon picked up and is now the accepted distress call for planes and ships alike. A less well known call sign is ‘Pan-pan’ (from the French panne – meaning a breakdown) which is used in less serious incidents such as mechanical problems which are not life-threatening. As with ‘Mayday’ it is repeated three times to ensure clarity and to prevent confusion.

But I digress: what of May Day, the first day of May and the first day of summer? Traditionally this was always celebrated in Northern Europe as a chance to say farewell to winter, and an opportunity to have a celebratory bonfire (in some parts of Ireland it is still known as Bonfire Night, whereas the English save that expression for 5th November, being Guy Fawkes Night).

It is also the subject of some lovely customs, many of which lasted longer where the Celtic traditions remained strong, rather than elsewhere. Take the charming custom of washing your face with May dew. The 1652 book by a Dr Gerard Boate entitled ‘The Natural History of Ireland’ says this of the custom:

“ The English women, and gentlewomen of Ireland… did use in the beginning of summer to gather good store of dew, to keep it by them al the year after for several good uses both of physick and otherwise, wherein by experience they have learnt it to be very available.”

The collecting of dew would take weeks of preparation. In April, May and into June the girls would get up before the dawn, go to the green fields (wheat was best) and harvest the dew – either with their bare hands, or more especially by spreading a sheet out over the moist grass, and then wringing it out and collecting it in a glass jar. This would be topped up every day, and for the whole year would sit in the sunlight by a suitable window.

Every few days the concoction would be purified by carefully straining off the water so as to leave behind any sediment, dirt, or other impurities. And so, after nearly a year in which the freshest of fresh waters was imbued with sunbeams, it could be splashed on the face! Dr Boate’s book opined “The dew, thus thoroughly purified, looketh whitish, and keepeth good for a year or two after.”

The distillation was at its most powerful if applied before sunrise on 1st May, and in an age when we consider it beneficial to rub avocado extract into our hair, or spread unmentionable products over our skin to prevent wrinkles, who is to say that a spot of early morning dew water is not just as magical in its properties?

The practice gave rise to the riddle

I washed my face in water

That had neither rained nor run,

And I dried it on a towel

That was neither woven nor spun.

The answer lay in the fact that having washed your face in dew you always allowed it to dry in the fresh air – you would hardly go to all that trouble and then wipe it off afterwards!

This custom was by no means limited to the uneducated country poor – it was also favoured by ladies of fashion and has in some cases been transported, and lives on in at least one household in the United States. The blog at http://artbydot.com/?cat=4 recalls the fact that in one particular family the girls always set their alarms for six in the morning on May 1st so that they can run outside and rub their faces in the morning dew on the lawn!

Among the anticipated benefits of applying dew to the face (or even better, naked dew rolling!) was that it would prevent freckles, sunburn and wrinkles. It could prevent headaches, and even walking barefoot through the dew would ease bunions and callouses as well as preventing corns! For some reason it also enabled the person concerned to have greater dexterity in untangling nets, ropes, or freeing knots from string and thread. (Memo to self: get up early and roll around in the buff on the neighbour’s lawn – I don’t have one so his will have to do!)

Ireland in particular had many other May Day traditions, including cutting down a thorn- bush and putting it up outside your house and decorating it with ribbons. Another custom was to keep the brightly coloured egg-shells left over from Easter, and then string them together as a loop to hang around the tree. But tree-rustling was such a problem that a law was passed in the reign of George III (1775) stating that “every person who shall put up any Maybush opposite or near to his or her house or suffer any Maybush to be so put up or to remain for the space of three hours opposite or near to his or her own house…not being a person lawfully possessed of trees or woods or not having lawfully obtained the same … shall forfeit and pay such sum not exceeding forty shillings.” (Two pounds – the equivalent today of perhaps $220). 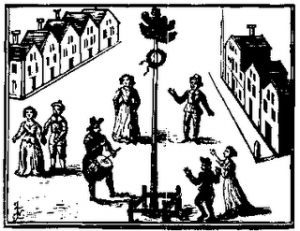 Another tradition was putting up a Maypole at a crossroads. The tallest was reputedly at the Strand in London, near the present St Mary-le-Strand Church. It was erected shortly after the Restoration of the Monarchy in 1660 (all such practices having been banned under Cromwell’s Protectorate) and was over 130 feet tall. It stood there until a storm blew it down twelve years later. But even this tradition caused our legislators to impose controls (presumably because of the risk of serious injury to road users from collapsing poles): an Act of Parliament dated 1792 was passed to ‘Improve and keep in repair the Post roads of the Kingdom’. Amongst other things it stated that “If any person… shall erect any sign-post or maypole or maybush on any part of the said roads…every person so offending shall forfeit the sum of twenty shillings”

The Irish had a similar tradition of putting up maypoles at cross-roads, but whereas the English seemed content to tie ribbons round the poles and dance around them, the Irish came up with some splendid alternatives. There were two famous crosses in Dublin at Harolds Cross and Finglas, and they would be smothered in soap until slippery. A succession of prizes having first been tied to the pole, the young men would then be challenged to climb the slippery pole and claim the prize – a hat, a pair of breeches or an old watch. It was also often an occasion for dancing and carousing, as well as traditional activities such as sack races, gurning (making contorted facial expressions through horse collars), wrestling, chase-the-pig and so on. In Tralee in 1785 an eccentric landowner called Miss Cameron introduced the custom of men racing each other with sacks of coal or flour draped around their necks – a spectacle giving rise to much rejoicing and revelry.

Some of the traditions date from the fact that May Day in Ireland was the traditional day for hiring agricultural labourers. It was also the day when rent was due. In some places such as Limerick it was customary for the farm workers to parade through the main streets of the town, complete with ploughs, scythes and other agricultural implements. 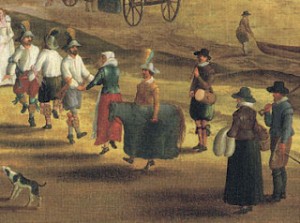 Morris dancers by the Thames at Richmond, 1620

In England many of the celebrations are limited to a specific town or village. Padstow in Cornwall has its hobby horse (or rather, ‘obby-oss’), while many places reckon that May Day is the start of the Morris Dancing season (cue much waving of hankies and banging together of stout poles). Across the country there may be people rushing into the North Sea, or attending festivals, or jumping off bridges! And that is quite apart from those who regard the day as International Workers Day …

2 Responses to “Mayday, Mayday Mayday! Let us bathe in the fresh morning dew!”