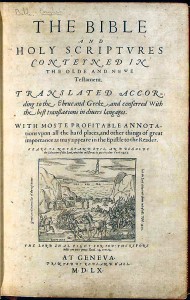 Anyone who has noticed my inability to type (or to remember to use spell-check) may think it is a bit rich that my post is on biblical errors. I just find it amusing that certain editions have achieved notoriety because of typos and errors in translation.

One of Richard Hall’s Bibles (which I still have) was the sixteenth century Geneva Bible, often known as the Breeches Bible because it suggests in Genesis that “they sowed figge-tree leaves together, and made themselves breeches.” (The King James Version suggests ‘aprons’ – most others refer to ‘coverings’).

In practice the Geneva was not Richard’s favourite Bible – that honour went to his Pasham Bible, printed in 1776 which he bequeathed specifically in his will. It was particulalry well-regarded because of its accuracy and as far as I know does not contain typos. It is certainly quite rare – I have found one on sale at Abe Books (a snip at £230 ) and this rather fine one, bound in tortoiseshell, in the Royal Library.

Looking up the history of Bibles leads to some rather amusing oddities with splendid nick-names :

• “Bug Bible”: Myles Coverdale’s 1535 Bible was known as the “Bug Bible” because Psalms 91:5 read: “Thou shall not nede to be afrayed for eny bugges by night”. In Middle English, the word “bugge” meant a “spectre that haunts” This use of the word “bug” was repeated in the 1539 Great Bible and in Matthew’s Bible, 1551.

• “Treacle Bible”: (Beck’s Bible): In the 1549 edition of the Great Bible, Jeremiah 8:22 was translated “Is there no tryacle [treacle] in Gilead?” Modern translations usually have “balm” or “medicine” instead. In Early Modern English, “treacle” could mean “a cure-all” as well as “molasses.”

• “Place-makers’ Bible” 1562: the second edition of the Geneva Bible, Matthew 5:9 reads “Blessed are the placemakers: for they shall be called the children of God”; it should read “peacemakers”.

In its chapter heading for Luke 21 it has “Christ condemneth the poor widow” rather than “commendeth“.

I have to feel sympathy for Messrs Baker  and Lucas, The Kings Printer, who in 1631 produced the  variant of the King James Bible  known as the “Wicked Bible” or “Adulterous Bible”( or, sometimes, “Sinner’s Bible”). Omitting the word ‘not’  when setting out the Fourth Commandment was unfortunate! In  Exodus 20:14  “thou shalt commit adultery” was a regrettable command! Later in Deuteronomy 5:24 ‘the lord our God hath shewed us his glory and his great asse’ did little to redress the view that perhaps the printers were a trifle slap-dash with the Word of the Lord!

In October 1632 the printers were fined £300 (perhaps £35,000 would be a modern equivalent)  and all copies were ordered to be destroyed. Most of the copies were recalled and only 11 copies are known to exist today.

• “Vinegar Bible”: 1717: J. Baskett, Clarendon Press: The chapter heading for Luke 20 reads “The Parable of the Vinegar” instead of “The Parable of the Vineyard.” One reviewer called this particular edition “a Baskett full of errors,” because it contained literally hundreds of typographical errors It is therefore eminently collectable (one copy sold for $5,000 three years ago).

• “Murderer’s Bible” 1801: “Murmurers” is printed as “murderers”, making Jude 16 read: “These are murderers, complainers, walking after their own lusts; and their mouth speaketh great swelling words, having men’s persons in admiration because of advantage.”

• “To-remain Bible” 1805: In Galatians 4:29 a proof-reader achieved unintended immortality having written  “to remain” in the margin, as an answer to whether a comma should be deleted. The note inadvertently became part of the text.

Not all the examples are all that ancient. Take the

• “Affinity Bible” 1927: I remember spending many an idle hour as a child, when I was required to sit through services in Church, reading such matters as the way to calculate Easter, and the table of consanguinity, stating what degrees of affinity were precluded from marriage. This 1927 Bible stated that  “A man may not marry his grandmother’s wife.” (Look, if my Granny wants to marry a woman, then dies, and I  want to marry her female partner why shouldn’t I?)! Besides, a quick look at my family tree suggests that rather a lot of Richard Hall’s immediate family married their aunts, cousins and quite close relatives. The gene pool would have been somehwat deeper if it had included Granny’s exes!

• “Owl Bible” 1944: which mistakenly refers to ‘owl husbands’ instead of ‘own husbands’

And please, I have no wish to enter into discussions about whether the Bible is accurate or true in all respects. I simply take malicious  delight in the mistakes of others….

One Response to “Mistakes of biblical proportions (or Bibles of mistaken proportions).”