More lavatorial humour: Gillray and his fellow caricaturists and a view of ‘convenience’ 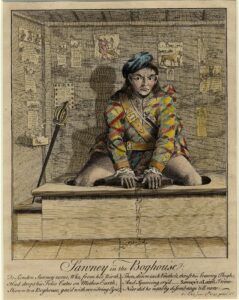 Sawney in the Boghouse. © The Trustees of the British Museum

The recent guest post by Naomi featured a print showing a Scotsman mis-using a close-stool or convenience. The original came out in 1745, just before the Jacobite uprising, and was at a time when anti-Scots feeling ran high. The reference to ‘Sawney’  or ‘Sawnee’ was a shorthand way of describing someone from Scotland – much as we might use ‘Jock’ today. I gather that it derived from the popular Scottish name of ‘Alexander’, which the English tended to shorten to ‘Alec’ and which  was abbreviated to ‘Sandy’ north of the border. ‘Sandy’ got corrupted to ‘Sawney’ and for several centuries it was used as a term of contempt by the English to refer to a stupid fool, of Scottish origin. The term went out of use some time in the 1800’s. 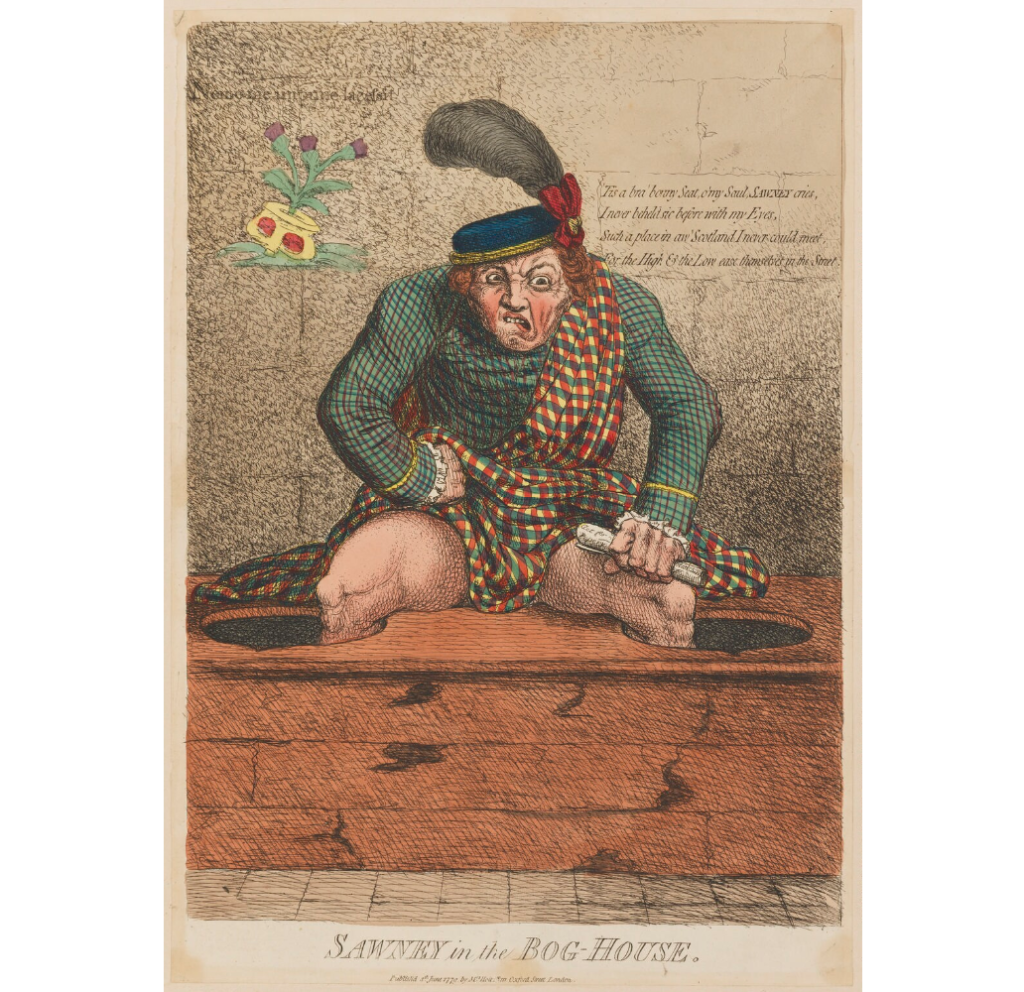 When James Gillray drew his version of Sawney in the boghouse in June 1779 he was copying a version which had appeared ten years earlier. The Gillray version, according to the British Museum site, is described as follows:

A Scot in Highland dress and wearing a feathered cap is seated in a latrine, his legs thrust down two holes in the board. He grasps in his left hand a rolled document inscribed “Act for [esta]blishing Popery”. Behind him a stone wall is indicated on which is etched (left) a thistle growing out of a reversed crown, inscribed “Nemo me impune lacessit”. On the right. and over Sawney’s head is engraved:

“‘Tis a bra’ bonny seat, o’ my saul”, Sawney cries,
“I never beheld sic before with me Eyes,
Such a place in aw’ Scotland I never could meet,
For the High and the Low ease themselves in the Street.”

In the background can be seen a thistle and crown – referencing the common accusation that the Scots were Jacobites. The ‘Act for establishing Popery’ refers to the Catholic Relief Act, fiercely opposed by many, and leading to serious riots in Edinburgh and Glasgow in February 1779. 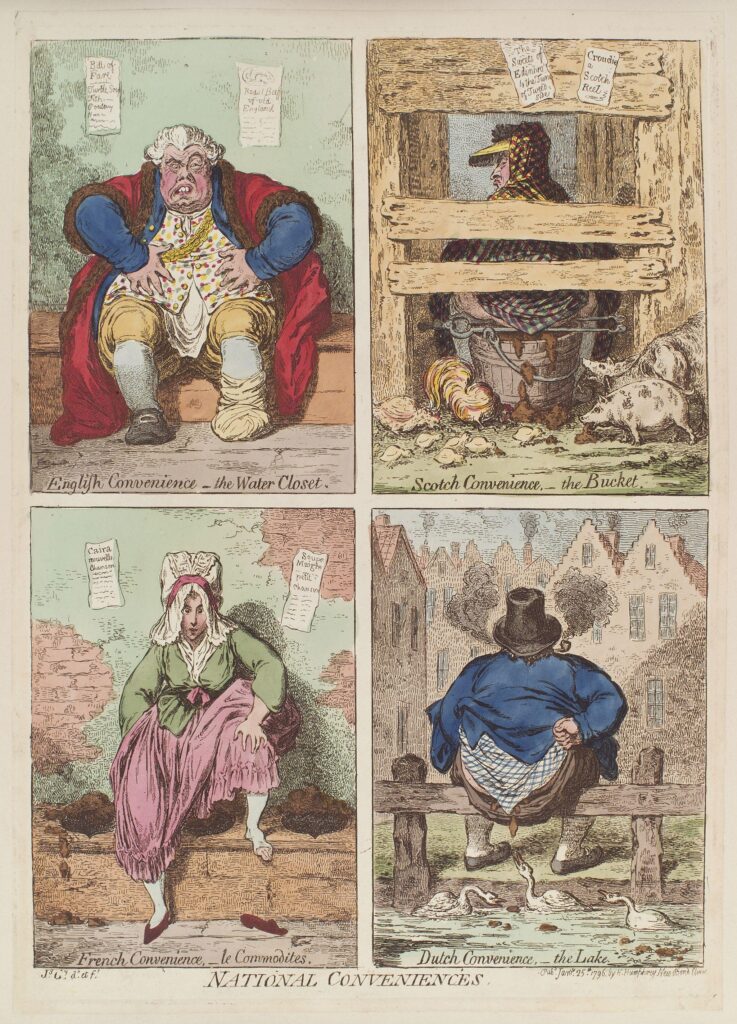 Gillray was obviously rather pleased with this racist nonsense and in January 1796 brought out a particularly revolting piece entitled National Conveniences. The British Museum site gives us this explanation of the four panels:

[1] ‘English Convenience – the Water Closet’. A grossly obese alderman of repulsive appearance sits full-face, clasping his sides. He wears his gown and chain, one gouty leg is swathed in bandages. On the wall behind his head are two placards: ‘Bill of Fare, – Turtle Soup Fish Poultry H . . .’ and a broadside, ‘Roast Beef of old England headed by a sirloin’.
.
[2] ‘Scotch Convenience – the Bucket’. A woman seated in back view on a pair of tongs across a bucket in some sort of permanent shelter composed of ramshackle planks. On this are two papers: ‘The Sweets of Edinbro’ to the Tune of Tweedside’  and ‘Croudie a Scotch Reel’. In the foreground are pigs and poultry.

[3] ‘French Convenience – le Commodites’. A pretty young woman, full-face, in a latrine with three apertures. She crouches with one foot on the ground, one on the seat. On the wall are two papers: ‘Caira nouvelle chanson’ and ‘Soupe Maigre petit Chanson.’

[4] ‘Dutch Convenience – the Lake’. A stout man (? or woman) in back view sits on a rail, smoking a pipe. In the foreground is shallow water with ducks. Behind and in close proximity are town houses with high crow-stepped gables. 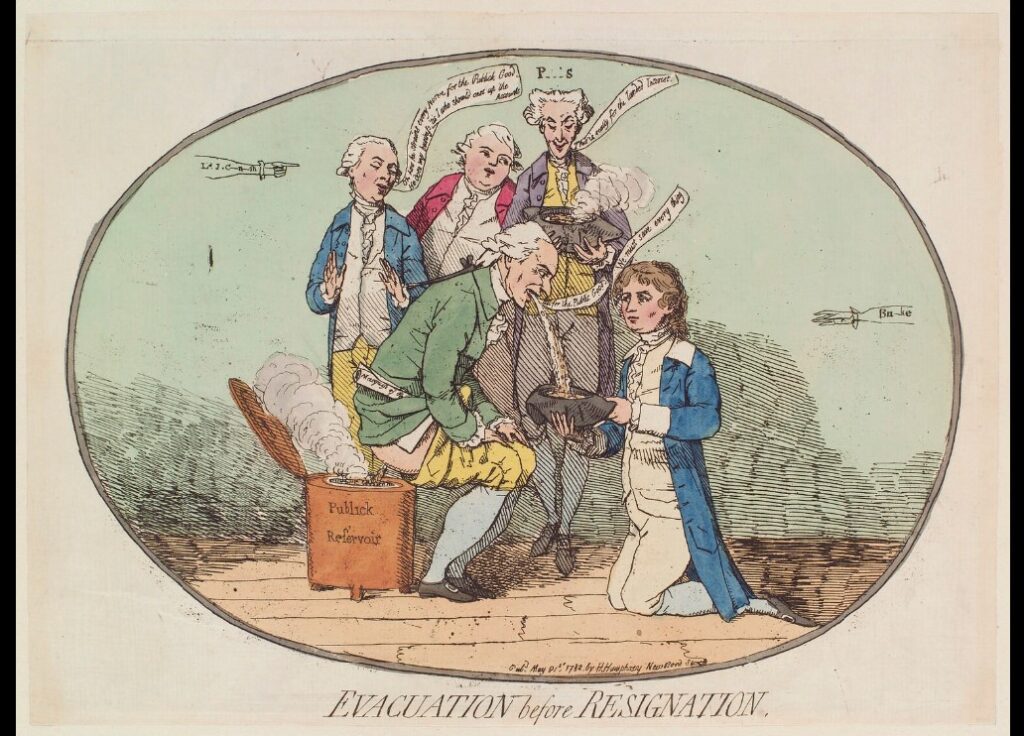 Gillray relished lavatorial jokes and happily applied them to political caricatures. Here we have ‘Evacuation before Resignation‘ showing Lord John Cavendish, a Whig politician who was briefly Chancellor of the Exchequor in 1782. His Lordship announces “We must save everything” – to which the servant, catching vomit in an upturned hat, remarks “For the Public Good”. Charming! 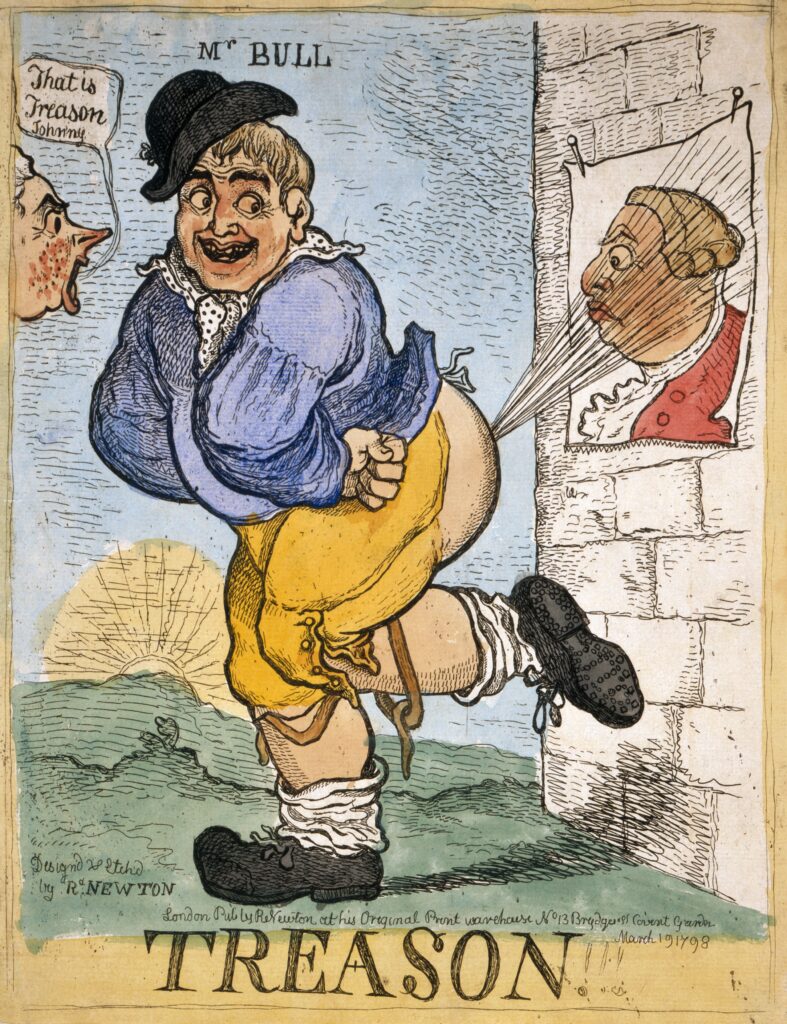 In the public domain – via Library of Congress

The young caricaturist Richard Newton delighted in lavatorial jokes: here, above, his defence of the  Habeas Corpus Act, which the King sought to suspend. It appeared in 1798 – the year that the 21 year old Newton died – and shows John Bull, archetypal Englishman, sticking out his bare backside and breaking wind  in the face of George III. Treason indeed! 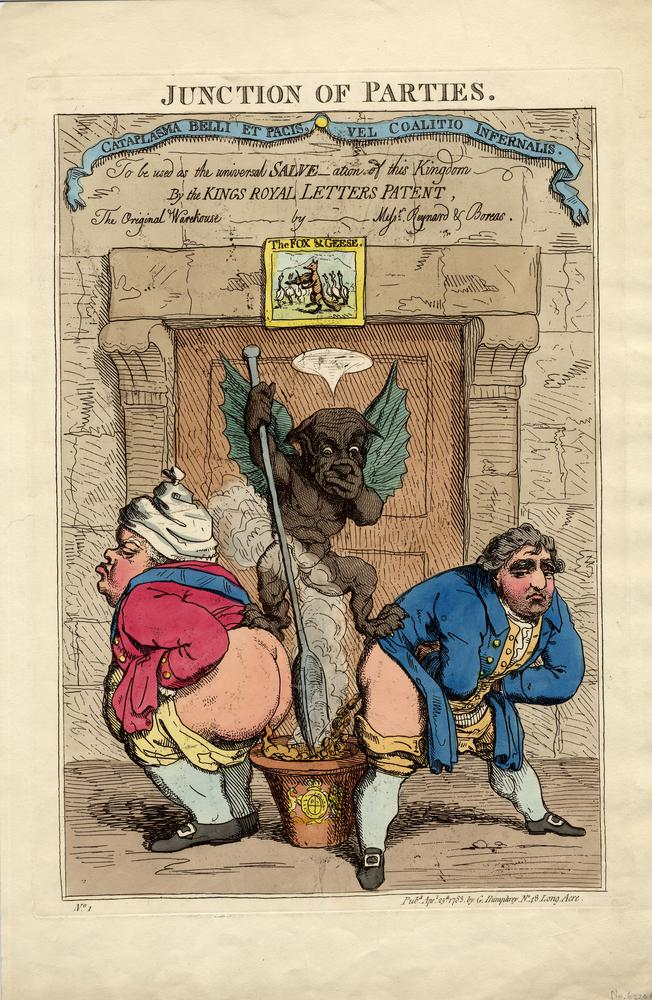 Junction of the Parties © The Trustees of the British Museum

But I think my favourite Gillray  potty joke – because it resonated with the Cameron-Clegg coalition – was this one from 1783 entitled Junction of the Parties. It depicts Charles James Fox and Lord North, who briefly entered into a coalition in 1783. The two stand back-to-back and defecate simultaneously into a pot, the contents of which were being stirred by the Devil, who holds his nose against the stench and stands between them, balancing with one foot on the lower back of each man. Superimpose Messrs Clegg and Cameron onto the faces of the defecators and it brings the parody right into the 21st Century.