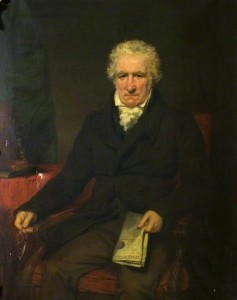 I have always had a soft spot for John Bell, printer, publisher and typeface designer – to the extent that when I bought a printing press as a teenager I opted for a Bell typeface instead of a more modern style. Nothing better evokes the elegance of the Georgian  era.

Bell was born in 1745 and lived until  1831. He deserves to be remembered for helping bring ‘literature to the masses’ by publishing a huge series entitled Poets of Great Britain Complete from Chaucer to Churchill   and which was published from 1777 to 1783. Each volume cost just six shillings, at a time when similar volumes usually cost many times this amount.He published the works of Shakespeare and books on the British theatre. Bell used many illustrations to go with the text and was one of the first publishers to abandon the long ‘s’  (and I am very grateful that he did, because the protruding tails of the long ‘s’ were always prone to break off during the printing process, as I found out to my cost with some of my early printing efforts).

Bell also ran Bell’s Circulating Library, which between 1778 and 1780 reportedly had some fifty thousand volumes (English, Italian, and French) covering topics such as history, antiquities, voyages of discovery etc. Invariably Bell is described a being ‘puckish’ – he clearly had a strong sense of humour allied to a flamboyant style  and a love of innovation.

Why mention Bell? Well, as a follow-up to yesterday’s post on the Ladies Monthly Museum. 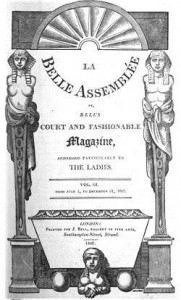 It has, quite properly, been pointed out that I was wrong in stating that the Ladies Monthly Museum was the first publication to use coloured fashion plates – it wasn’t, since it has been shown that others had already done so both in England and in Europe. But it was unusual in that it was aimed at more of a mass market than some of its more high-fashion competitors. The response to  yesterday’s post led me to research Bell’s own version of a magazine for women, La Belle Assemblée or to give it its full name  “La Belle Assemblée or, Bell’s Court and Fashionable  Magazine Addressed Particularly to the Ladies”. It first appeared in 1806 and ran until 1832. Bell was the publisher until 1821 when he retired. It was then published by G. & W. Whittaker & Co. from 1823–1829 ‘under the instructions of the proprietor’. The title was changed to The Court Magazine and Belle Assemblée in 1832 and from 1837 the ‘Belle Assemblée’ name was dropped and the magazine merged with the Lady’s Magazine and Museum in 1837 to become The Court Magazine and Monthly Critic.

Unlike many of its rivals the magazine appears to have been edited by women for women, with female authors such as Elizabeth Inchbald  and later on Laman Blanchard and Caroline Norton at the helm.

The format of the magazine was fascinating: it typically consisted of five plates – one depicting a member of the court or fashionable society, a couple depicting the latest fashions, and a further pair showing sheet music and a sewing pattern. Rather than appear to be dominated by the frivolities of ladies fashions Bell separated the portion of the work dealing with the fashions of the month from the remainder of the publication. 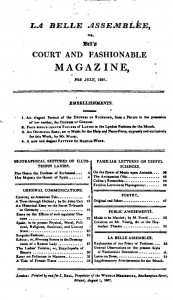 At least in the early days readers could purchase either of the two divisions of the work separately; the first consisting of the main articles, together with two of the plates; the second (‘La Belle Assemblée’) consisting of the fashion plates and sewing pattern, together, usually, with four pages describing the plates and discussing the latest London and Paris fashions.

1 An ELEGANT PORTRAIT OF THE DUCHESS OF RICHMOND

3 AN ORIGINAL SONG SET TO MUSIC for the harp and piano-forte expressly and exclusively for this work by Mr Massi.

4 A NEW AND ELEGANT PATTERN FOR NEEDLEWORK

There were then biographical sketches of ‘illustrious ladies’, essays on such uplifting themes as travel, politeness in manners, ‘a tale of former times’ and an article on ‘the Power of Music on animals’. 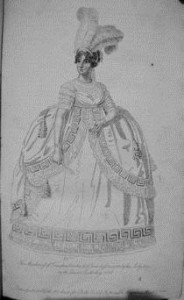 There was a section on poetry, a review by a theatre critic and articles to go with the fashion plates explaining the ‘General Observations on the present style of Fashionable Decoration’ followed by ‘Supplementary Avertisements for the month’. The advertisements promoted the miracle qualities of different cosmetics and depilatories, and urged readers to try potions and lotions of all varieties as well as offering advice on where to find new types of corset.

The magazine was unashamedly aimed at the better-off lady. Not for her the cheap (well, one shilling) rivals – this cost more than double that amount. It was aimed at the lady of fashion, who wanted to know what was going on in London and in Paris, even if the educational and instructive elements seem somewhat self-conscious to today’s readers. It encouraged readers letters, and ran articles by writers such as Mary Shelley (her ‘Frankenstein‘ was reviewed, albeit as being by an anonymous writer, in 1818).

In other words during the thirty years leading up to Queen Victoria’s accession La Belle Assemblée was aimed at ‘discerning women’ and was hugely influential in terms of taste and fashion. It was certainly a periodical which you can imagine that Jane Austen would know about – as indeed would any well-educated young lady wishing to expand her interests and knowledge, and keen to keep up with changes in fashion. The web page of Regency Fashion at http://regencyfashion.org/lb.html  has an interesting photograph of the annual volume from 1814 belonging to Fanny Austen Knight, one of Jane’s relations.

John Bell died in Fulham in 1831. He deserves to be remembered for helping to shine a light on women in the Regency Era – and for coming up with some really good typefaces. I just wish they were available on WordPress….

And if you would like to find out more about my ancestor Richard Hall, his life and times, do have a look at the Amazon site at http://www.amazon.co.uk/Journal-Georgian-Gentleman-Richard-1729-1801/dp/1846245230

Meanwhile, a noteworthy New Year and a totally terrific 2012.