As a quick follow-up to my blog on illustrations cut from paper, showing life in the Georgian era, here are a few more of the cut-outs made by Richard:

First, one of two men visiting the dovecote to collect meat during the winter months (a reminder that fresh meat was hard to come by in the winter because many animals would be slaughtered and ” salted away” – leaving pigeon as the main source of fresh meat). Unfortunately the leading man’s  gun has folded back on itself and it looks more like a walking stick….I am reluctant to undo the crease in case it breaks off!

Secondly, one I have used before of the amazing rapier made by Richard. It is just over five inches long (it lost its extreme tip when I failed to exercise due care when moving it onto the scanner – oops!). 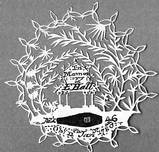 Then there is this amazingly intricate memorial cut out by Richard when his first wife died. It is hardly more than an inch wide, and must have taken hours of careful work. It shows the coffin under a temple roof, with Eleanor Hall’s age (forty six) and date of death (11th January 1780).

Slightly more routine, here is another coaching scene, one of cavalry, and one showing British military and naval might.

I rather like this one showing Richard up a ladder pruning one of his cherry trees: 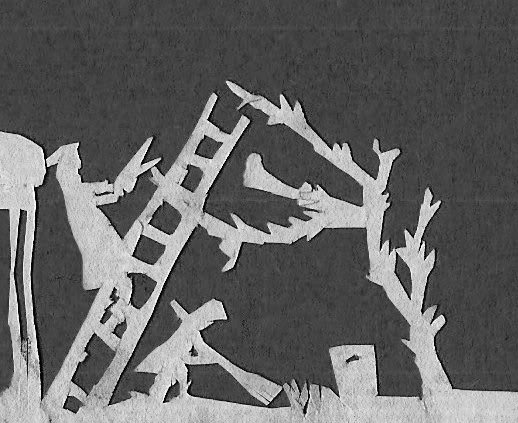 To end with, Richard’s cut-out of rushes growing in the banks of the River Windrush at Bourton on the Water.

In all I have perhaps fifty or sixty cut-outs, and I have used  around twenty to illustrate aspects of Richard’s life in my book The Journal of a Georgian Gentleman. It looks as though paper cutting (which originally spread from  Germany to the United States, where it is known as ‘scherenschnitte’  i.e. scissor cut) was a family tradition – I have a number of rather larger cut-outs, obviously Victorian, in a note-book belonging to Richard’s grand-daughter Lucy Hall.