Richard had two sons by his first marriage. The youngest was Francis – and life dealt him a somewhat hard hand compared to his elder brother. William was made a partner in the family haberdashery business at One London Bridge; Francis went off to Portsmouth to find a niche for himself working in some  capacity or other for the land-based Naval Office. Then, when William got bored and had enough of being a shop keeper, Francis was expected to drop everything and  take over the business. It was Francis who had the sad legacy of watching the  business come to an end, when the shop premises were demolished to make way for improved roads linked to the “new” Rennie Bridge across the Thames. I blogged about  that here but his life was sad in other respects as well –  not least when he was widowed at an early age.

He had married Mary Davis when she was eighteen – he was  thirty one.  In September 1789 she gave birth to a son Edward, but he  died just ten weeks later.  She conceived within five months of the loss. But when her new son – christened Francis after  the father – was born on 5th January 1791 he was destined to live only five months before  catching a fatal illness. Another child, also christened Edward, was born a year later and barely survived six months before going the way of his siblings. How Mary must have feared the worst when she fell pregnant again – the fourth time in four years. This time she gave birth to a son called William, and miraculously he survived childhood, grew up, married, had children, went bankrupt and died at the age of 51.

Mary meanwhile waited five years before falling pregnant again, this time with twins.  Something went disastrously wrong with the pregnancy – she lost the twins and on March 2nd 1799 she died of associated complications. Her husband Francis was 46, his surviving son just five years old. It must have been an unimaginably horrible and uncertain Easter for the family.

For Richard it meant the sad  business of attending the funeral – and kitting out the family in mourning gear: 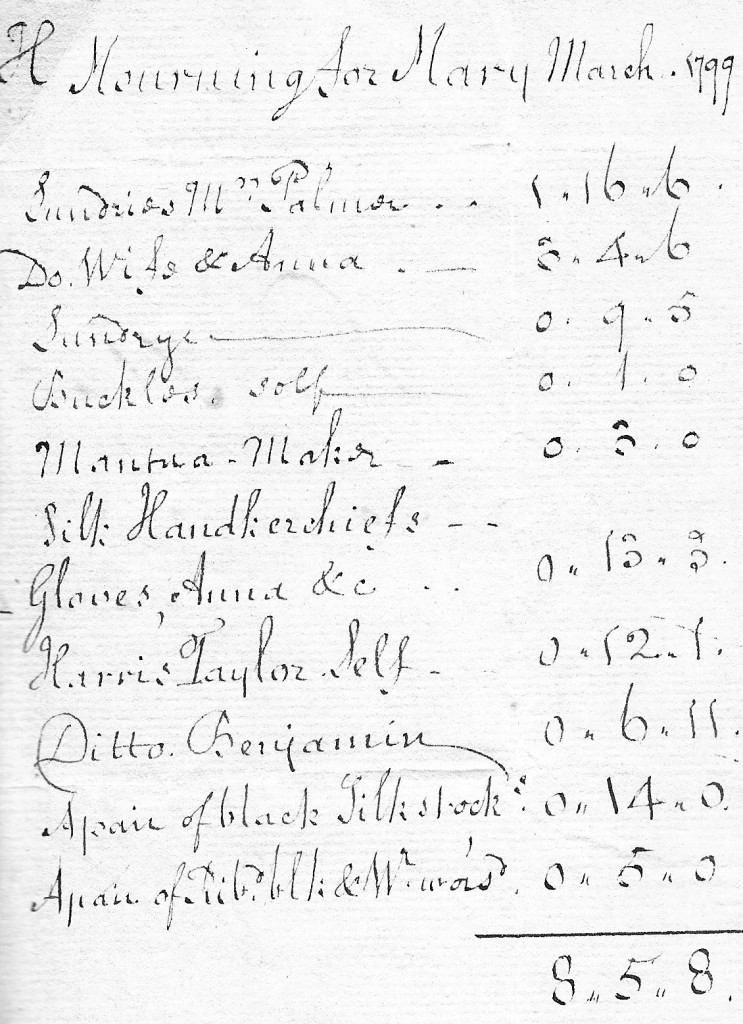 This is his list of the various sundries for himself, his wife, his 17 year old daughter Anna and 12 year old son Benjamin.

One curious thing: as far as I can see this was the only time in his lifetime that Richard and the children by his second marriage met up with the (grown up) children of his first marriage – largely because the two families were estranged. Richard barely spoke to his first family for the last twenty years of his life because of their opposition to his choice of second wife. And yet something happened at the funeral, something which Richard would have not necessarily have known about. Daughter Anna – all of seventeen remember – took a shine to her young cousin Richard. He was 13, and although it took them another nineteen long years to get round to it – they married in 1818 and bred like rabbits. Old man Richard Hall was long dead by then – which is a shame because he would have been in the unlikely position of being both grandfather to  the groom and father to the bride at the same ceremony. Talk about keeping it in the family…

Even more of a coincidence is that they were not the only couple who would later look back and say “that is where we met – at Mary’s funeral.” I mentioned that Francis had a son by Mary called William. At the funeral he met for the very  first time his cousin, the four year old Frances, granddaughter of Richard Hall via his daughter Martha. Fast forward twenty years and they too tied the knot – a reminder of the very small “pool” from which people were likely to find a spouse in the Georgian era. Better the devil you know!

So a sad funeral with a happy ending… ain’t life amazing?