I don’t often look at purely political caricatures but I came across these on the British Museum site, and it occurs to me that they  exhibit the same jingoistic patriotism (and anti-French sentiment) as currently fill our newspapers a propos Brexit. Of course, to get the flavour we would need to swap George III for the head of a certain T. May, and I rather feel that the head of Jean-Claude Juncker would be a fine substitute for  the Emperor Napoleon*. 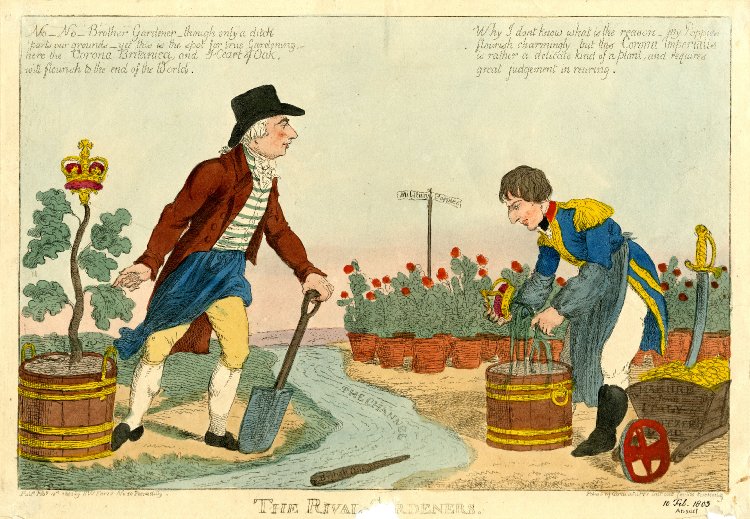 First up,The Rival Gardeners by Charles Williams, published by S W Fores on 10th February 1803. According to the BM site”The gardeners, George III and Napoleon (right), stand on opposite sides of a stream, ‘The Channel’, in which floats a sailor’s cudgel inscribed ‘British Oak’. Each has a plant growing in a tub hooped with gold: Napoleon’s is a drooping weed on which dangles a small imperial crown. Behind him are serried rows of ‘Military Poppies’ in pots; beside him (right) is a wheelbarrow filled with coins, in which he has stuck his sabre; this is ‘Manure from Italy & Switzerland’. Napoleon, in military dress with apron and over-sleeves, bends over his plant, holding up the crown; he says: “Why I dont know what is the reason – my Poppies flourish charmingly – but this Corona Imperialis is rather a delicate kind of plant, and requires great judgement in rearing.” George III, plainly dressed and wearing an apron, holds a spade, and points to a sturdy oak-plant growing in his tub, whose summit is a British royal crown. He says: “No – No – Brother Gardener – though only a ditch parts our grounds – yet this is the spot for true Gardening, – here, the Corona Britanica, and Heart of Oak, will flourish to the end of the World.” 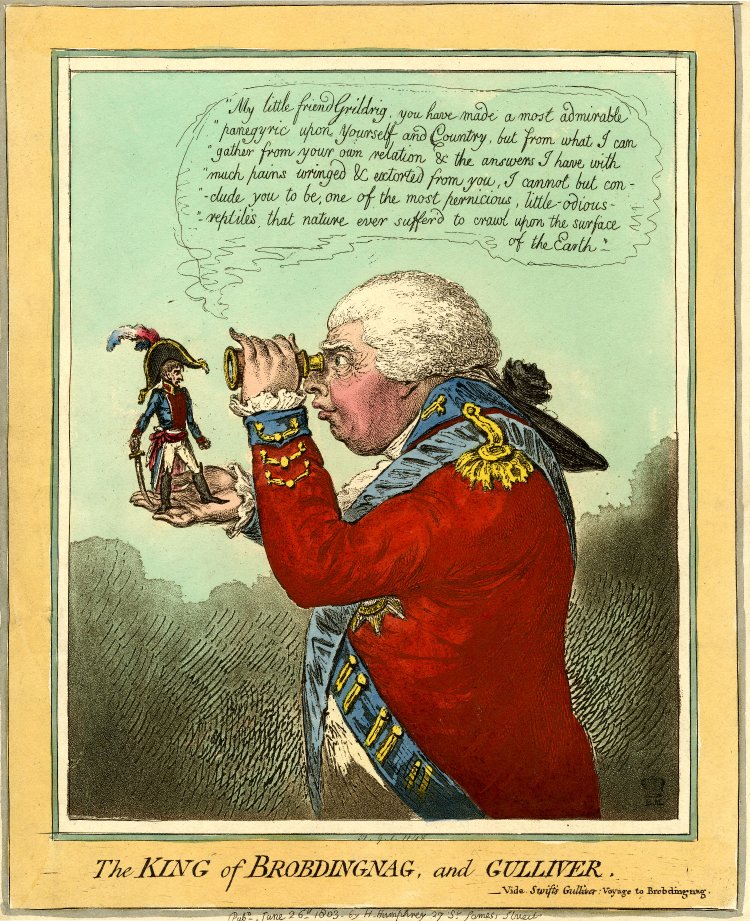 Next we have Gillray’s well-known image entitled The King of Brobdingnag. As usual with Gillray, it was published by Hannah Humphrey, and also appeared in 1803. The vitriolic verse ends with the words ” I cannot but conclude you to be one of the most pernicious, little odious reptiles, that nature ever suffer’d to crawl upon the surface of the Earth.” 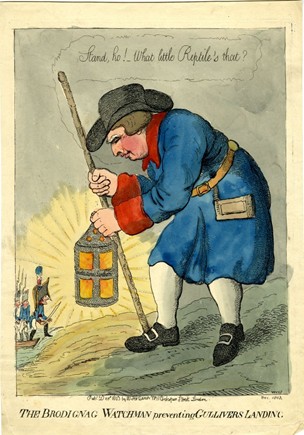 Then there is The Brodignag Watchman (no idea why it is Brodignag and not Brobdingnag) preventing Gullivers Landing. It shows the king, illuminating the world with his ‘constitutional  lanthorn’ (i.e. lantern) while observing a tiny figure of Napoleon stepping off a boat onto the beach. The Emperor, sword in hand, looks terrified at the gigantic figure of the King. George III utters the words “Stand ho! What little Reptile’s that?” It was published by William Holland right at the end of 1803. 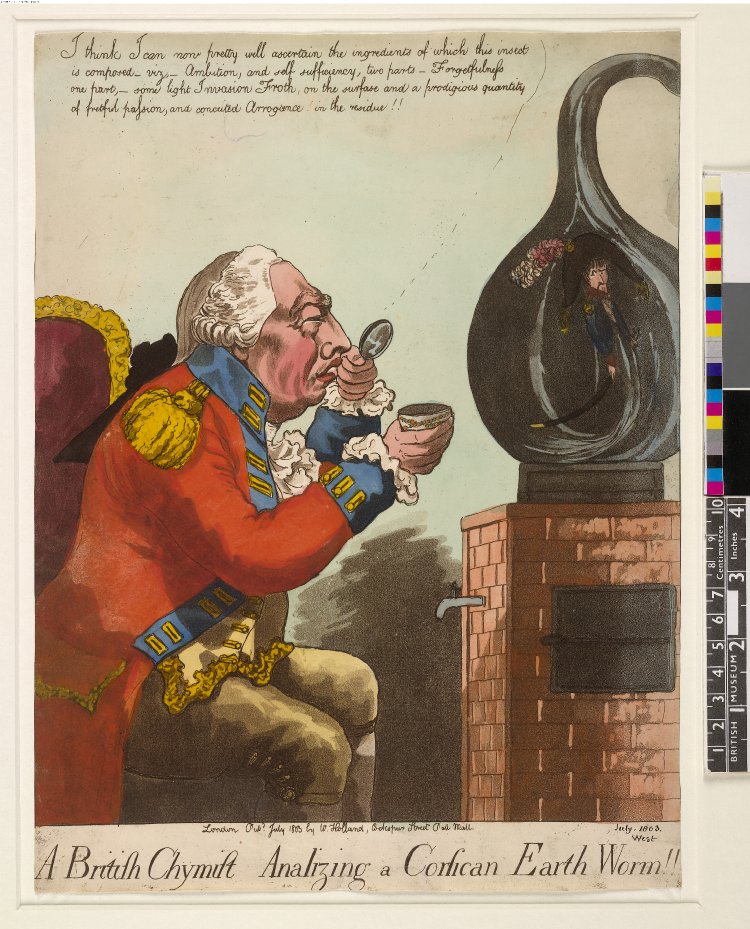 To end with A British Chymist analysing a Corsican Earth Worm. It was published by William Holland in 1803 and is described as being ‘after Temple West’. The B.M. site explains that it shows George III sitting in profile scrutinizing through a glass the contents of a small bowl, which he holds in his right hand. These come from a retort containing a figure of Napoleon, who looks with angry apprehension over his right shoulder. Napoleon wears his usual huge cocked hat and sabre; his legs merge with the liquid contents of the retort. This stands on a rectangular brick furnace, with a tap facing the King, who says: “I think I can now pretty well ascertain the ingredients of which this insect is composed – viz, – Ambition, and self sufficiency, two parts – Forgetfulness one part, – some light Invasion Froth, on the surfase and a prodigious quantity of fretful passion, and conceited Arrogance! in the residue!!”

Ah well, a nice bit of invective and a few choice insults never did go amiss! And of course the caricatures established a fine tradition for diminishing the size and physical prowess of our enemies. Napoleon was average size – yet nowadays even many French will take it that he was smaller than average and we talk of  a ‘Napoleon complex’.

The other thing I find interesting is the way that the caricaturists adapted comments made in peace time, turning them from criticisms into virtues. Take the constant depiction of George III as ‘Farmer George’, suggesting in numerous pre-war etchings that he was only interested in matters agricultural. Come the war with Napoleon, and this is turned into a virtue – he is ‘nurturing’ freedom and the Constitution. Similarly, there are many highly critical depictions of the King using a quizzing glass – a sign of short-sightedness, political and optical. With war, this attribute is turned around to become positive – here is a king who scrutinises things carefully, doesn’t let anything escape his notice, and uses his vision to make sound judgments. An interesting twist!

All images appear courtesy of the Trustees of the British Museum – their collection is searchable online, which makes it an excellent resource 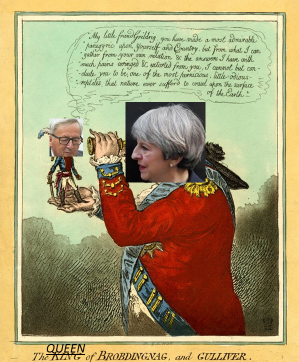 An odious little reptile indeed! I know Juncker’s not French –  in fact he hails from Luxembourg, but that is close enough….