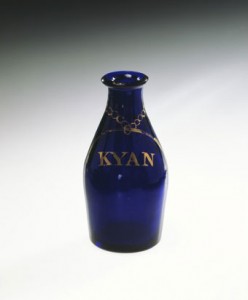 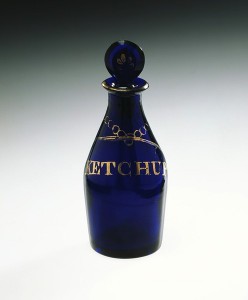 When I first started researching for my new book on Bristol Blue glass I came across these pictures of condiment bottles on the V & A Museum site and they got me thinking: the one for soy sauce shows that there is nothing new about our love affair with mono-sodium glutamate, but what was Kyan and how did the ketchup compare with its modern counterpart?

Kyan turns out to be a corruption of Cayenne, the capital of French Guiana. It is a place which has given its name to the Cayenne peppers which grow there. The othert two taste enhancers have their origins in the Far East, and came to Britain as trade opened up in the 1690’s. Their popularity took off as part of the vogue for “all things Chinese” in the second half of the 18th Century. As the import of porcelain, lacquer-ware and tea expanded, so it brought merchants into contact with Chinese, Malay, Vietnamese and Indonesian customs – places where these flavours had been developed over many centuries.

We wouldn’t actually recognize the ketchup. We think of a thick gloopy red sauce made from tomatoes but to the Georgians it originally meant a dark brackish liquid infused with fermented fish extracts and, later, a type of runny chutney made from items such as fermented walnuts, or mushrooms. The tomato didn’t make an appearance in ketchup before 1800, and sugar really only became an ingredient fifty years after that. I came across a (delicious?) recipe from 1736 which involved boiling down “two quarts of strong stale beer and half a pound of anchovies”, and then letting it ferment. Salt and fermentation were key – and throwing in a strong smell of old fish was definitely to be encouraged!

Making the ketchup was time-consuming: when Eliza Smith brought out her The Compleat Housewife, or Accomplish’d Gentlewoman’s Companion, in 1727 it became a publishing sensation with many reprints throughout the century. It is also credited with being the first cookery book published in America (Williamsburg, 1742). Her recipe for the sauce involved wine, spices and mushroom liquor: 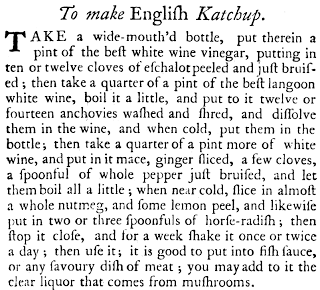 By 1748 Sarah Harrison was writing her Housekeeper’s Pocket-Book and Compleat Family Cook and advising readers “to lay in a Store of Spices, … neither ought you to be without … Kitchup, or Mushroom Juice”

Mushrooms remained a basis for many ketchups – indeed George Watkins started bottling it in 1830 and the company is still making it today with the same “ye olde” label on the bottle (though it is nowadays made from mushroom powder which is hardly authentic ).

The other ingredients used to try and imitate the original fishy flavour were pickled walnuts. This is the recipe which would have been known to Jane Austen, supplied by her friend Martha Lloyd (I gather that Martha spent time with the Austen family at Chawton, and her handbook is available here).

Take green walnuts and pound them to a paste. Then put to every hundred two quarts of vinegar with a handful of salt. Put it altogether in an earthen pan keeping it stirring for eight days. Then squeeze through a coarse cloth and put it into a well lined saucepan, when it begins to boil skim it as long as any scum, rinse, and add to it some cloves, mace, sliced ginger, sliced nutmeg, Jamaica peppercorns, little horse radish with a few shallots. Let this have one boil up, then pour it into an earthen pan, and after it is cold bottle it up dividing the ingredients equal into each bottle”.

Eight days of stirring! No nipping down to the supermarket and picking a bottle off the top shelf for Regency cooks!

In time the tomato began to infiltrate. It is mentioned in a recipe in 1801, and early references to it use the delightful name of “love apple” . By 1837 an American farmer called Jonas Yerks (or Yerkes)was distributing tomato ketchup nationally. Other companies followed suit, with. F. & J. Heinz launching what has become the definitive tomato ketchup in 1876. The sauce got sweeter and sweeter and more viscose and we end up with the gloop so beloved of chip eaters everywhere.

Etymologists argue whether the word has Chinese or Malay origins – certainly it came to Britain with various spelling variants, Jonathan Swift was describing it as’ catsup’ back in 1730. Katchup, Catchup, and Kitchup were alternative spellings to a product which quickly became phenomenally popular throughout the English speaking world.

To end with: a set of five sauce bottle labels dated 1826 which are shown as having been sold on the Antique Silver Spoons website

6 Responses to “Never put the ketchup bottle on the table…. the origins of ketchup, catsup or kitchup.”