At first sight you would not expect to find much in New York which would resonate with a Georgian fanatic – but I am delighted to say that if you look, it is amazing how much you can find!

I started off by taking a taxi to the heart of the financial centre – Wall Street. When writing Pirates and Privateers I came across a reference to the fact that William Kidd had settled in New York after marrying the wealthy widow Susan Bradley Cox Oort. Their home off Pearl Street was one of the most prestigious in the area, with fine views (untrammelled by today’s sky scrapers!). It has of course long since disappeared. 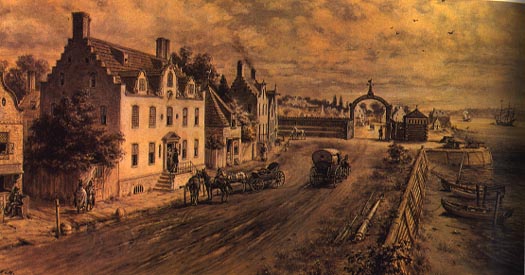 As a wealthy philanthropist Kidd helped with the building of Trinity Church, finished in 1698. In particular he lent the builders a pulley system for raising the stones to build the church tower, with the Vestry Minutes of 20 July 1696, recording that “Capt. Kidd has lent a Runner & Tackle for the hoiseing [ie hoisting] up Stones as long as he stays here.”

Poor William Kidd – he was left high and dry by the authorities back in London when he sailed off to the Indian Ocean, armed with a Letter of Marque. OK, he dabbled a bit in piracy and robbery on the High Seas. Yes, he struck a mutinous crew member across the forehead with an iron-banded bucket, from which the man later died. But he was never given a fair trial and was hanged in 1701, a victim of political shenanigans.It meant that he never actually got to worship at Trinity Church, although he appears to have paid for the use of a pew for the family to use for at least 17 years after his death. The Trinity Church website here shows the original minute, with Pew 4 shared between the Rector and the heirs of Captain Kidd. 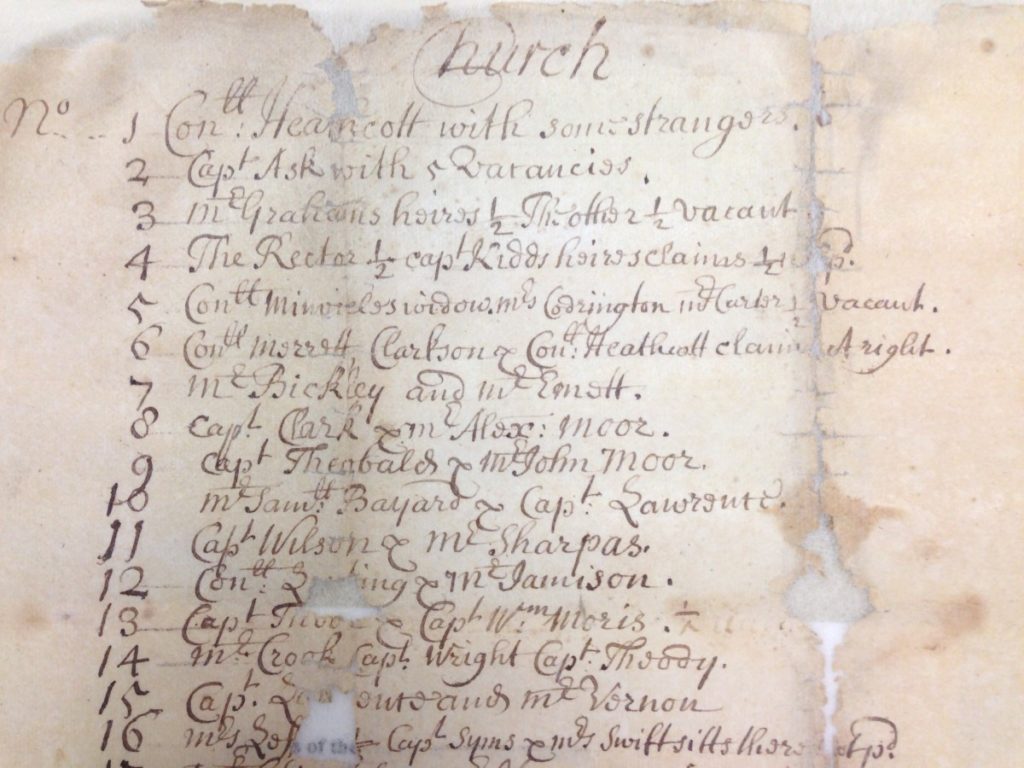 The records of who-sat-where – item 4, the Kidd’s pew

The church was destroyed in the ‘Great Fire ’which swept through New York on 20 September 1776 when almost a third of the city was consumed in the flames, but rebuilding soon got underway and astonishingly the spire remained the highest building in the city until the 1890s. 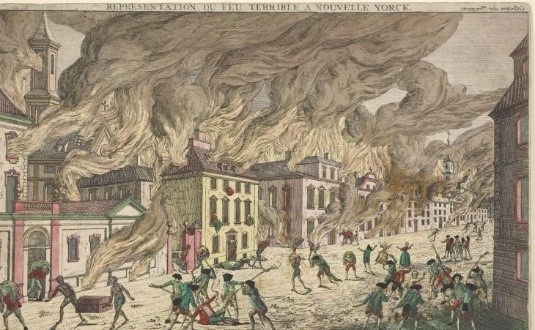 Nowadays it is totally dwarfed and in permanent shade from the ‘cathedrals to Mammon’ which tower above it. 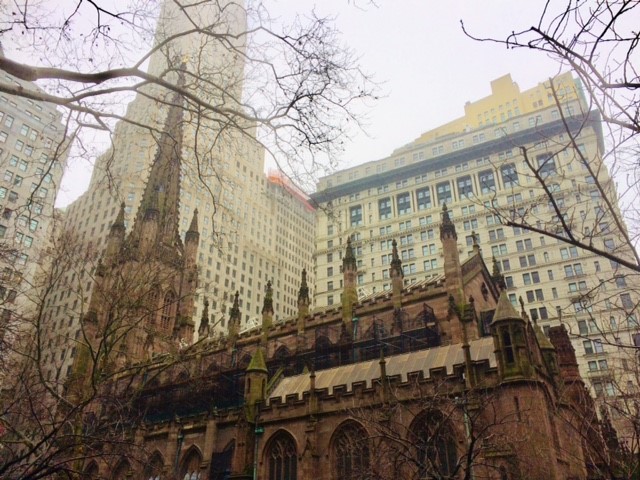 St Trinity Church, and below, one of the gravestones. 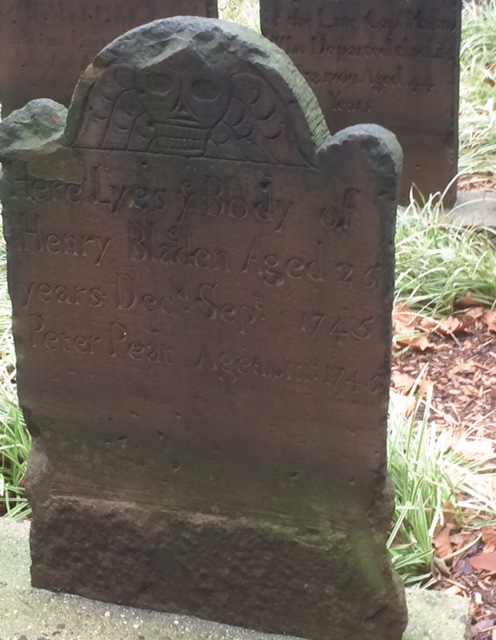 At present Trinity Church is undergoing renovation works, but the graveyard contains many reminders of the 17th and 18th centuries. 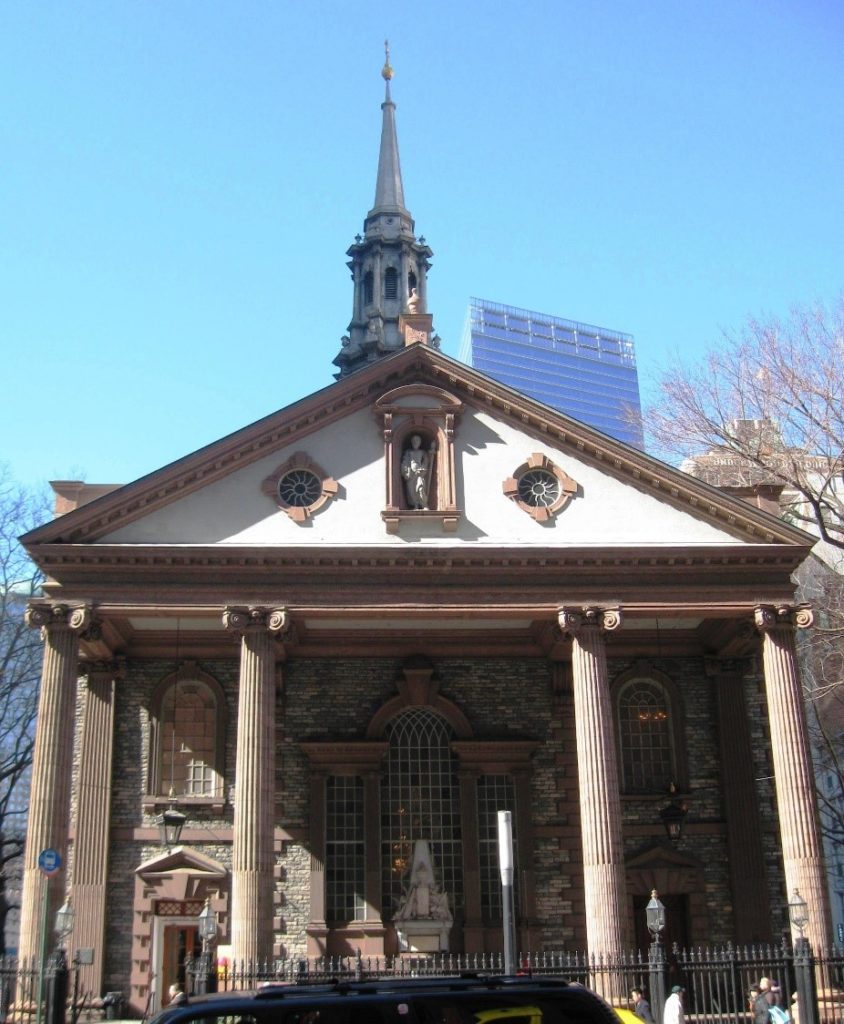 Next up, this Georgian Gent wandered up to the chapel of St Pauls, one of the few buildings in Lower Manhattan to escape the ravages of the Great Fire. It had been completed in 1766 and is fascinating because it contains the pew occupied by George Washington during the two  years while New York was the nation’s capital. Here, on Inauguration Day, April 30 1789, George Washington and other members of the U S Congress worshipped. Nowadays the wall above the pew exhibits an early form of the Great Seal of the United States. You know the bird is a turkey – I can only confirm that it looks more like a goose… 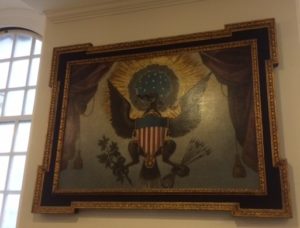 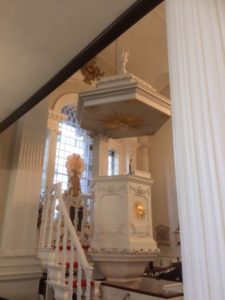 But it is a splendid church, well worth the visit. But that is not all that remains – how about more secular buildings? How about this fascinating building in Upper Manhattan, owned by The Colonial Dames of America. 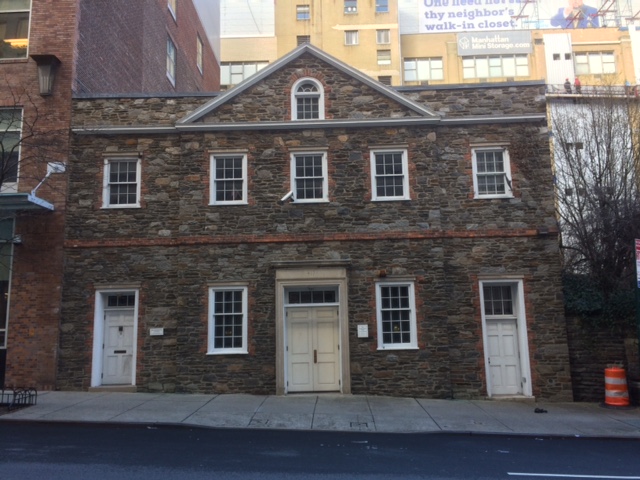 The CDA is an organization made up of women who are descended from an ancestor who lived in Colonial America between 1607 and 1775, and who was of service to the colonies either as a result of holding public office, or of being in the military, or in some other “eligible” way.

The logo of the Colonial Dames of America

The Colonial Dames have their headquarters in the period Mount Vernon Hotel Museum. Next to it, they have premises used as a meeting hall – ideal for lectures. I was thrilled to be able to speak there to the American Friends of the Georgian Group. It made for a fascinating experience – usually you give your talk at a set time, and have refreshments afterwards. Not here – there is a much better arrangement: everyone meets up, has a good gossip, and everyone knocks back a few glasses of wine. All very convivial. Half an hour after the appointed start time I wandered over to the lectern, only to find that my lap-top had jammed – no notes, and no lap-top display showing what image was being displayed on screen. No bother. It’s the sort of thing which might have phased me when I started, but by now I am immune to the curve-balls which technology throws at you. I gave the talk and it seemed well received, and it is always fun to meet up with fellow Georgian enthusiasts.

That wasn’t the end of the city’s Georgian connection. The next day we visited the fabulous Metropolitan Museum, adjoining Central Park. Some of the exhibitions are stunning – for instance the restored interiors of Georgian buildings, re-assembled inside the Museum. These are just two:

The interior, Baltimore House, from 1810

But somehow the Met is a bit intimidating – it is so huge. It would take days to see everything, and fortunately the entrance ticket gives you a right of admission for three consecutive days – if your poor feet can stand it! Instead we wandered across to the Frick Museum – a truly astounding private collection with delights around every corner. Somehow the idea of one man collecting the whole lot makes it all the more personal – there was a reason why he acquired paintings – to make a pair, to illustrate a point, to show an unusual juxtaposition. And suddenly you are surrounded by old favourites – Gainsborough’s portrait of  Grace Dalrymple Elliott ‘(Dally the Tall’, featured in my book In Bed with the Georgians) and a Reynolds portrait of Selina, Lady Skipwith. I blogged about her here because my ancestor Richard Hall lent the good lady £1100 at a rattling 4½%. 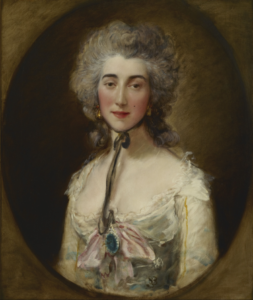 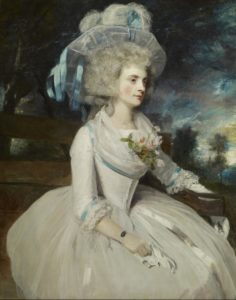 There are dozens of other period paintings – by Romney, Turner, Constable and so on and a fascinating pair of portraits by Hans Holbein hung either side of the fireplace – one of Thomas More, and one of his arch-rival Thomas Cromwell. Each ended up with his head on the block, courtesy of Henry VIII, and here they are destined never to be rid of each other, glowering into Eternity.

New York was a great experience. I had been before and therefore did not feel the need to ‘do’ the Empire State Building, or take a heli-tour, or go round the harbour on an up-market booze-cruise. Been there, done that. Instead it was great fun to look out the vestiges  of a glorious and fascinating past, hidden but never totally obscured by a plethora of modern buildings.