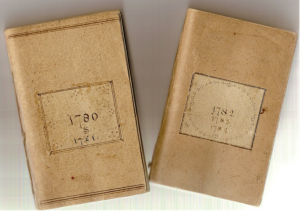 I last kept a diary when I was at school, rather a lot of years ago, but I remember one thing about the diaries – Letts made them – and that was that they always showed the phases of the moon. Which struck me as slightly odd, because nowadays it matters very little whether it is a new moon, a full moon, or something in between. Unless you are a vampire. Or believe that you should only sow seeds in your vegetable garden if the moon is full.

But I suspect that our Georgian ancestors would have taken a very keen interest in the moon, not least because it could make a huge difference to travel times and to the cost of travel.

Take the trip from London to Bath – normally a two-day journey. The person arranging the coach would need to factor in an overnight stop, including dinner and breakfast the next day, when calculating the ticket price. But if it was a full moon, as long as the roads were in decent repair (i.e. no potholes, like there are in today’s roads, because a broken axle was best avoided!) the coach could simply keep going through the night. OK the carriage lamps were not exactly headlights and perhaps were more used to make sure people could see you rather than so that you could see them, but every little bit helps. Especially if you wanted to be able to see if there were people lurking in the undergrowth at the side of the road, ready to hold you up at gun point….

The highwayman – Stand and Deliver!

I have previously used these two paper cuts by Richard to show the difference which the Turnpike Trusts made to road transport in the middle of the 18th Century:

Before: note the front wheel about to crash down over a large rock…

After: – a smoother road surface

The attempted Jacobite uprising in 1745 drew attention to the appalling state of the roads – troop movements were hampered because equipment got bogged down as the army tried to move north. It led to a great push to improve the roads throughout England, funded by each locality via tolls raised at turnpikes across the land. Roads became safer, rides became more comfortable…

So I was interested to see that Richard Hall recorded a novelty (for him) in his diary: a night-time trip from London on the Gloucester coach. “Thursday 23 March 1780, set out in the Gloucester Coach after Dinner, to travel all night – was thru the goodness of God very kindly preserv’d”. There was a frost and Richard remarked that it was cold in the morning. In the early hours of Friday 24 March they reached Oxford at a quarter past two, took an early breakfast, got to Burford between 7 and 8, and had a second breakfast. I imagine that he then changed coaches, because he got to Bourton on the Water at midday. (“Oh what occasion for thankfulness. A frost, cold day, rain at night”).

On checking the records, I see that there had been a full moon at around the time of his journey. I suspect that he must have been pretty knackered after travelling all night – unless the rattling monotony of the coach sent him to sleep. He certainly didn’t have a busy schedule the next day – the only appointment was to “take teas with Mr Palmer”.

I am sure that the overnight journey would not have been attempted if there had been no moon to guide the way – a reminder of just how much the Georgians were dependent upon planetary movements. In the summer Richard got up 15 minutes earlier every week from the beginning of April, meaning that he would be rising at 4 a.m. by the end of August – but in the winter he hibernated, unless, of course, the moon was full so that he could prowl the Gloucester countryside…