I recently came across this Carington Bowles print on the wonderful Lewis Walpole site here. I was looking for images of windmills, and sure enough, there is one in the background. Otherwise it is a typically quiet rural scene – well, apart from the sailor trying to nick a local girl from her boyfriend by offering her a coloured ribbon. The oik of a boyfriend looks somewhat peeved, and one of the dogs is drinking the milk from the pail while no-one is paying attention. It is from 1778 and is interesting as an example of what sailors, labourers and milkmaids were wearing at the time.

As I say, I was actually researching windmills in connection with a much less pastoral scene – the food riots of 1766. The Gentleman’s Magazine for 1766 lists progressive hardship throughout the latter half of the year as the harvest failed to live up to expectations, and prices started to sky-rocket. The export of grain was  halted, but there was still not enough to go round, at a time when bread, made from wheat, really was a staple part of the diet.

People in the country started to take the law into their own hands, and rioting occurred in many places. Here is the start of a report of what was happening in the West Midlands:

You have to feel a bit sorry for the wheat growers – it was after all simply a case of supply and demand. Worse was to follow in Coventry later in October, as the magazine explains:

So we had mob violence, aimed at reducing prices for cheese. Meanwhile in Salisbury rioters were enraged when they  attacked a windmill at Bradley and found that the miller was adulterating the wheat with ground chalk, lime and horse beans. This so provoked the mob that they set out and destroyed another seven or eight bolting mills in the area ( “bolting” – otherwise “boulting” – being another word for sifting). 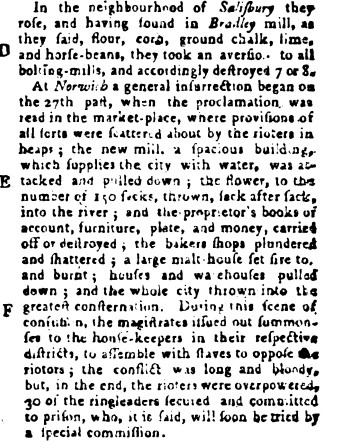 As the report stated, more serious insurrections occurred in Norwich, which seemed to be aimed at destroying local businesses as much as it was about feeding the poor. Sack after sack of “flower” ie flour was thrown into the river, a water pumping building was destroyed, bakers shops were plundered and smashed, warehouses set fire to and gutted. Sounds like quite a party…

The repercussions were swift and ruthless. Two months later the Gentleman’s Magazine reported on a number of criminal trials linked to the outbreak of mob violence. In virtually every case, the ringleaders were sentenced to death: 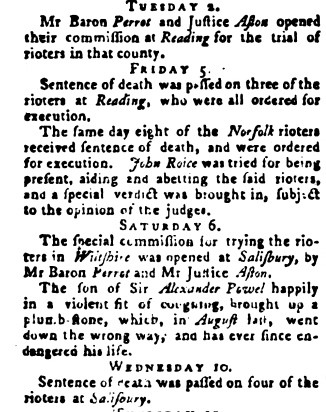 I find it fascinating that in the middle of a record of  people sentenced to hang, there was a report of a man coughing up a “plumb stone” which he had swallowed four months earlier and which had “gone down the wrong way.” Obviously the health of the son of Sir Alexander Powel rated more highly than the fate of a few rioters…