A few caricatures on the subject of going to the opera in Georgian England – as usual, courtesy of those lovely people at the Lewis Walpole Library site, here. The first one appeared on New Year’s Day 1781 and was published by James  Wicksteed – a rather nice comment on the fashion for wearing muffs, and for enormous hair-pieces topped with  little mob-caps: 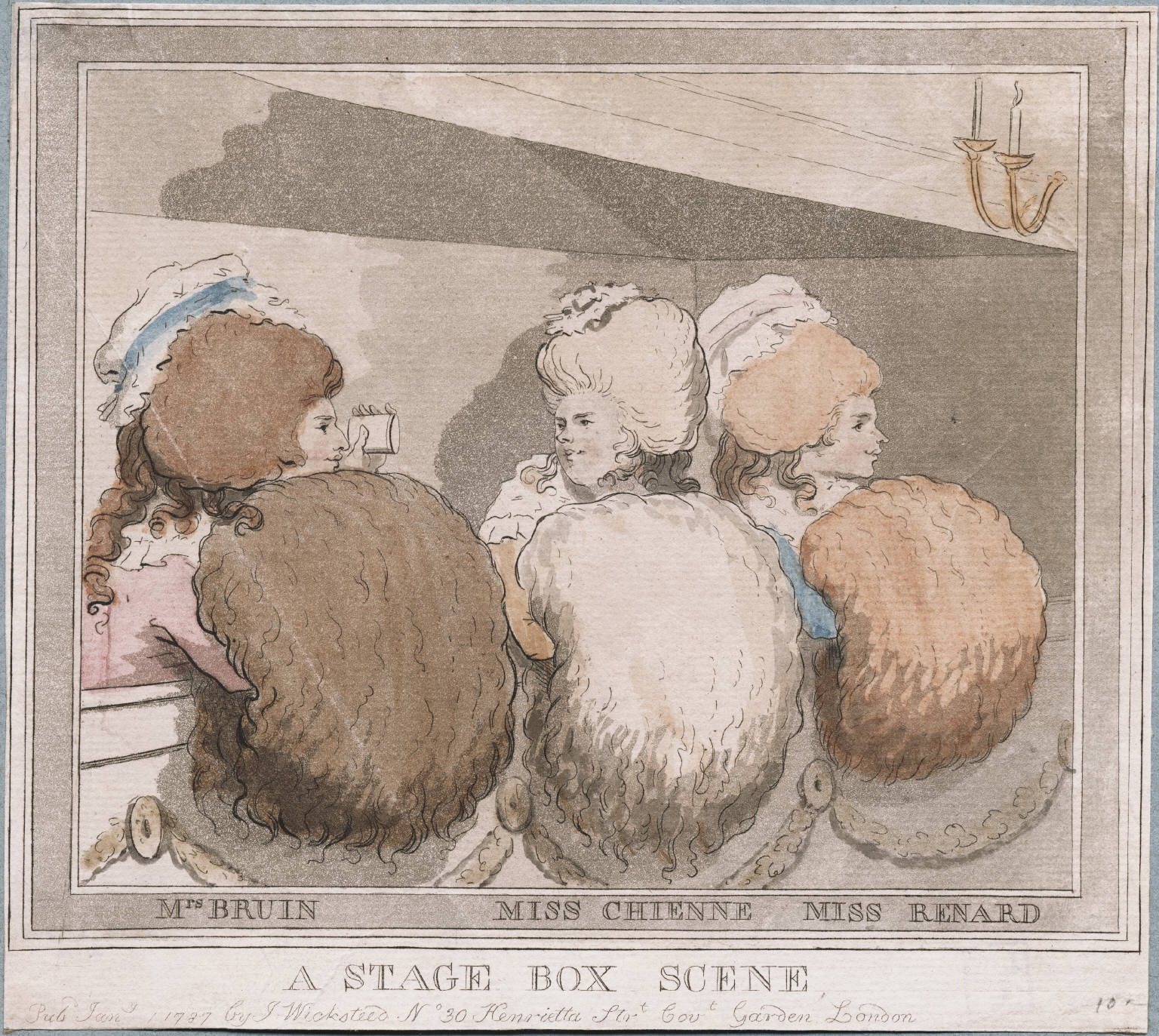 Mrs Bruin is shown using her opera glass to look across at someone else in the auditorium – surely one of the most important points about going to the opera, i.e. to see what everyone else of fashion was wearing.

Next up, a couple of Gillray’s, the first from 1791 showing Lady Henrietta Cecilia Johnston. She featured in at least half a dozen of his caricatures, this one entitled “At the Opera.” 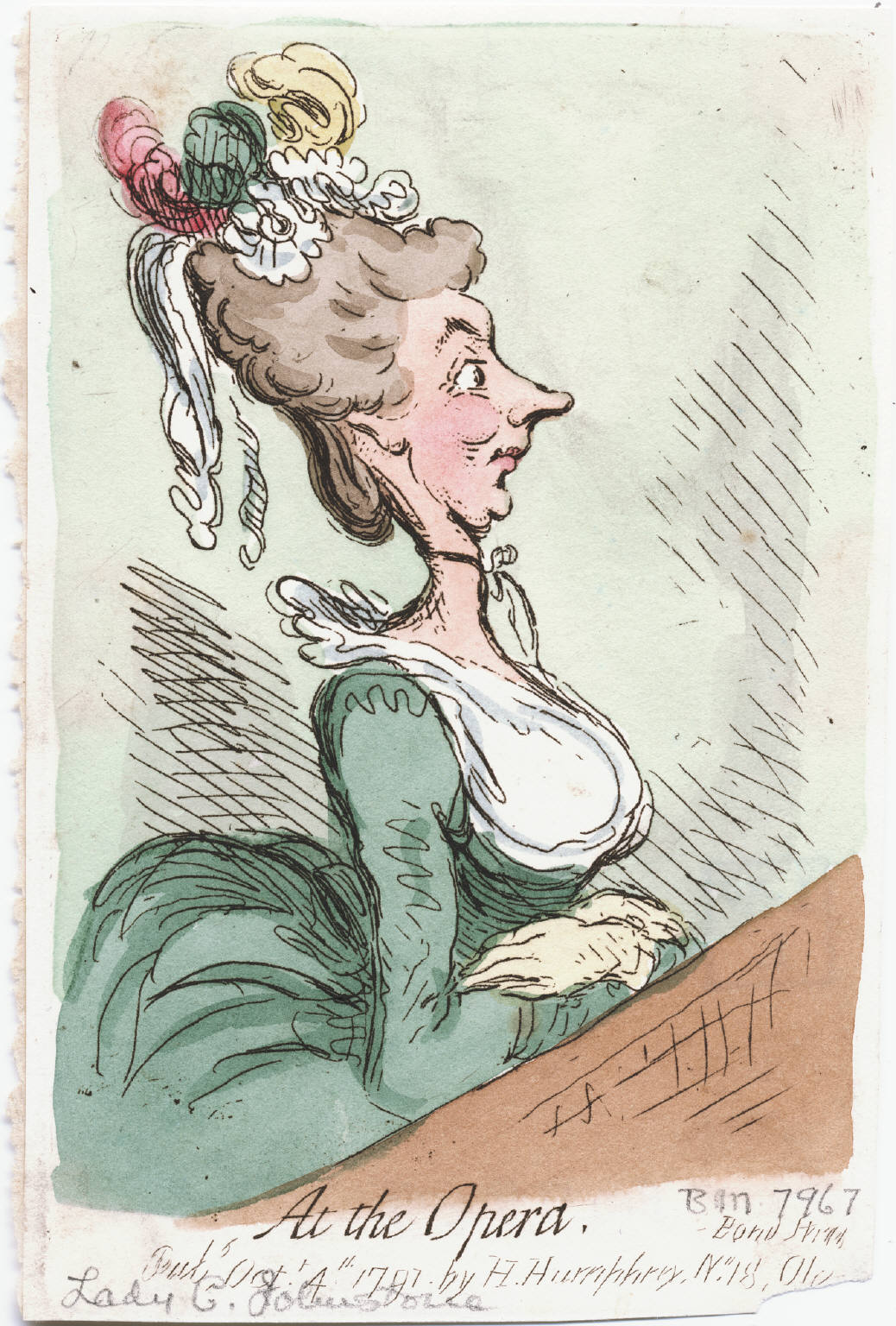 The next, from 1795, is called “Characters in high life : sketch’d at the new rooms, Opera House” and apparently features the Duchess of Rutland, and her sister Lady  Manners.  I bet one of those two ladies was none too pleased at that portrayal! But it does show the ridiculous lengths feathered hats had gone to by the last decade of the century – imagine sitting behind that pair having your nose tickled by ostrich feathers throughout the performance! 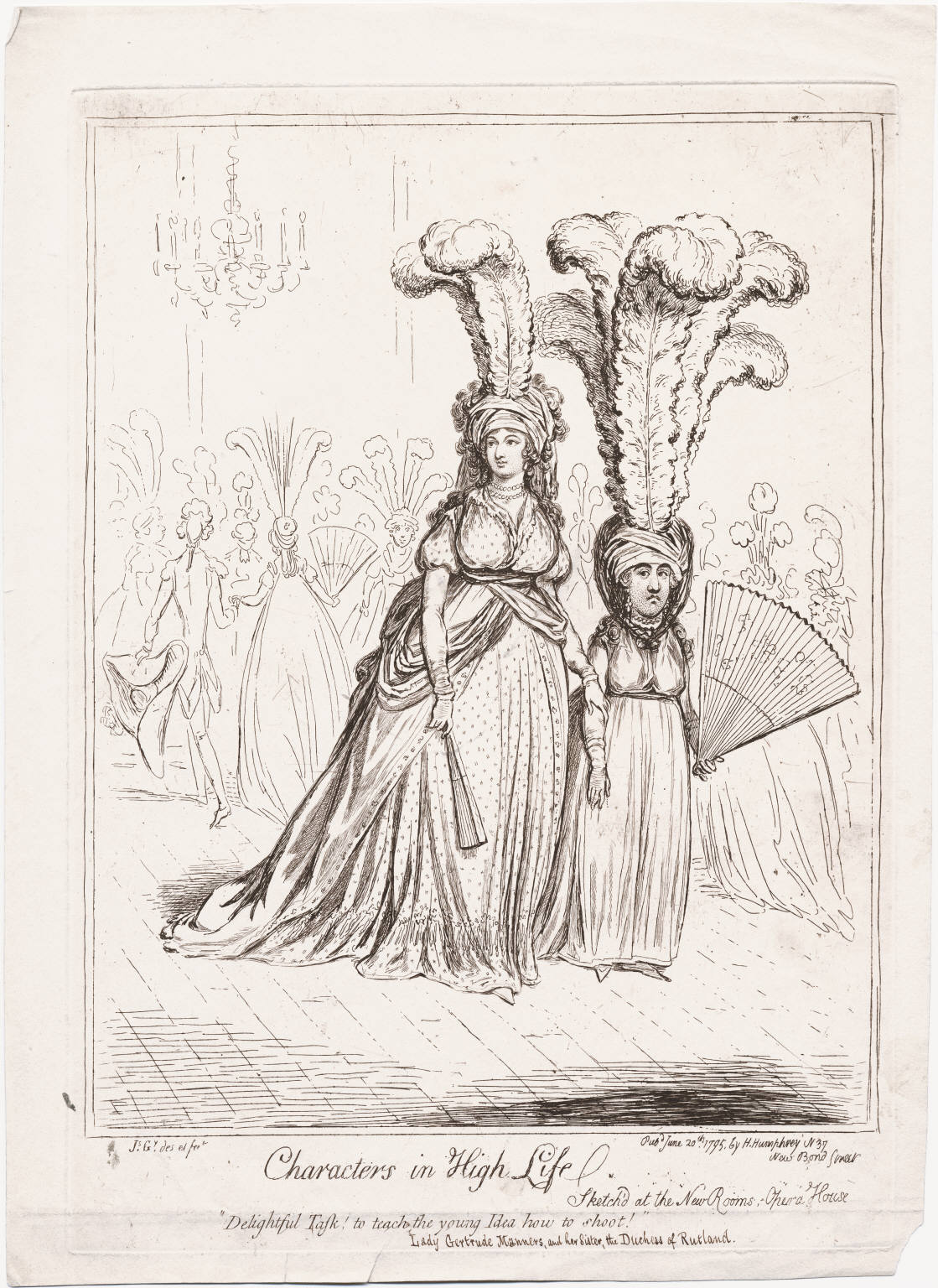 An aquatint from 1792 by S W Fores apparently duplicated an image from ten years earlier (so presumably the fashions are from the ’80s rather than the 90’s), and also demonstrates the absurdity of high  fashion, especially for the more mature, larger, lady! Here we see a pair, trussed and be-ribboned, under the title of  “A side box at the opera.” It is a wonder that the Georgians left us with any ostriches roaming the wilds of Africa at all…. 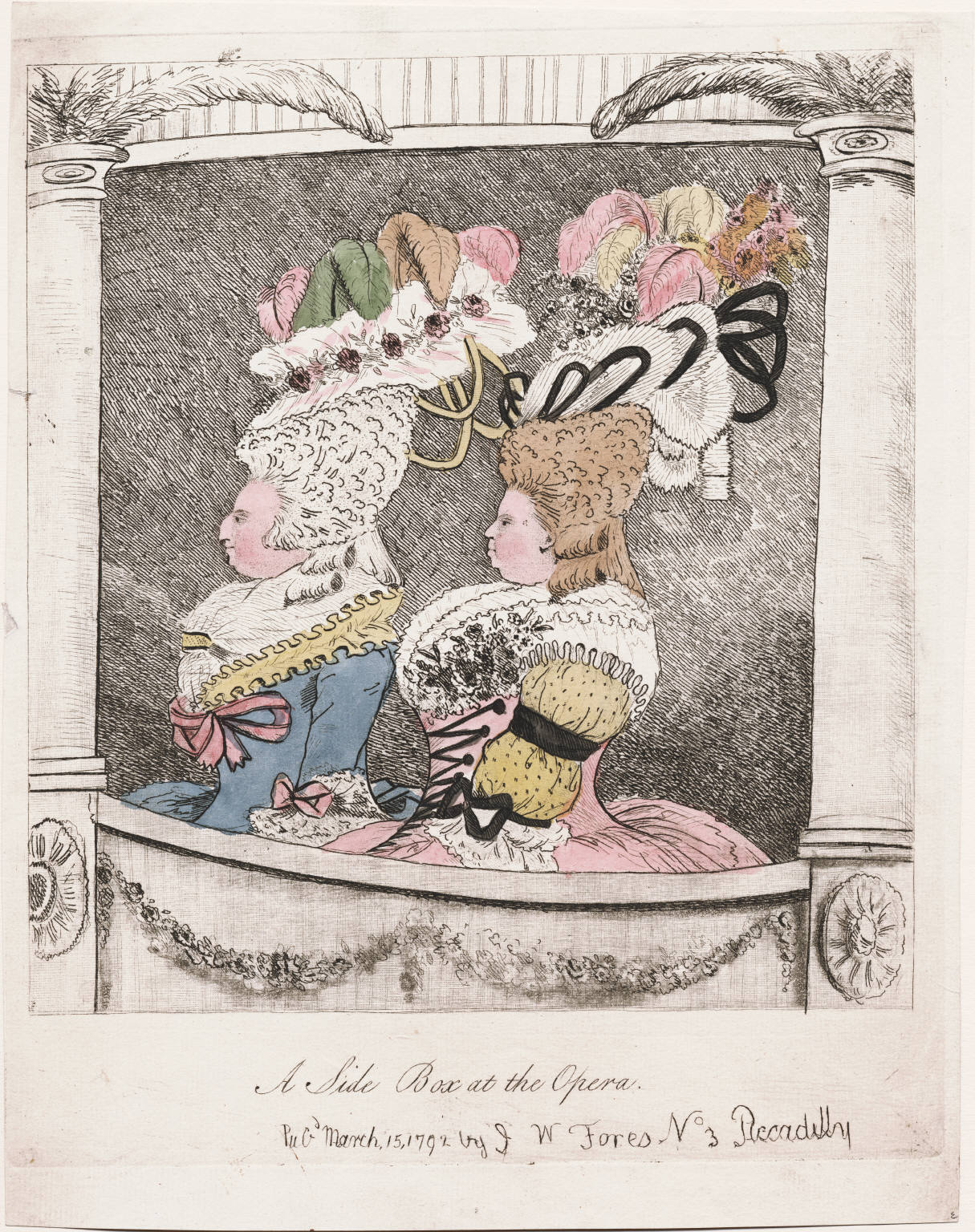 Fast forward to 1829 and we see another example of fashion idiocy – enormous hats making the wearer either invisible or looking like a midget. It is entitled “Hat-boxes” and was by William Heath. 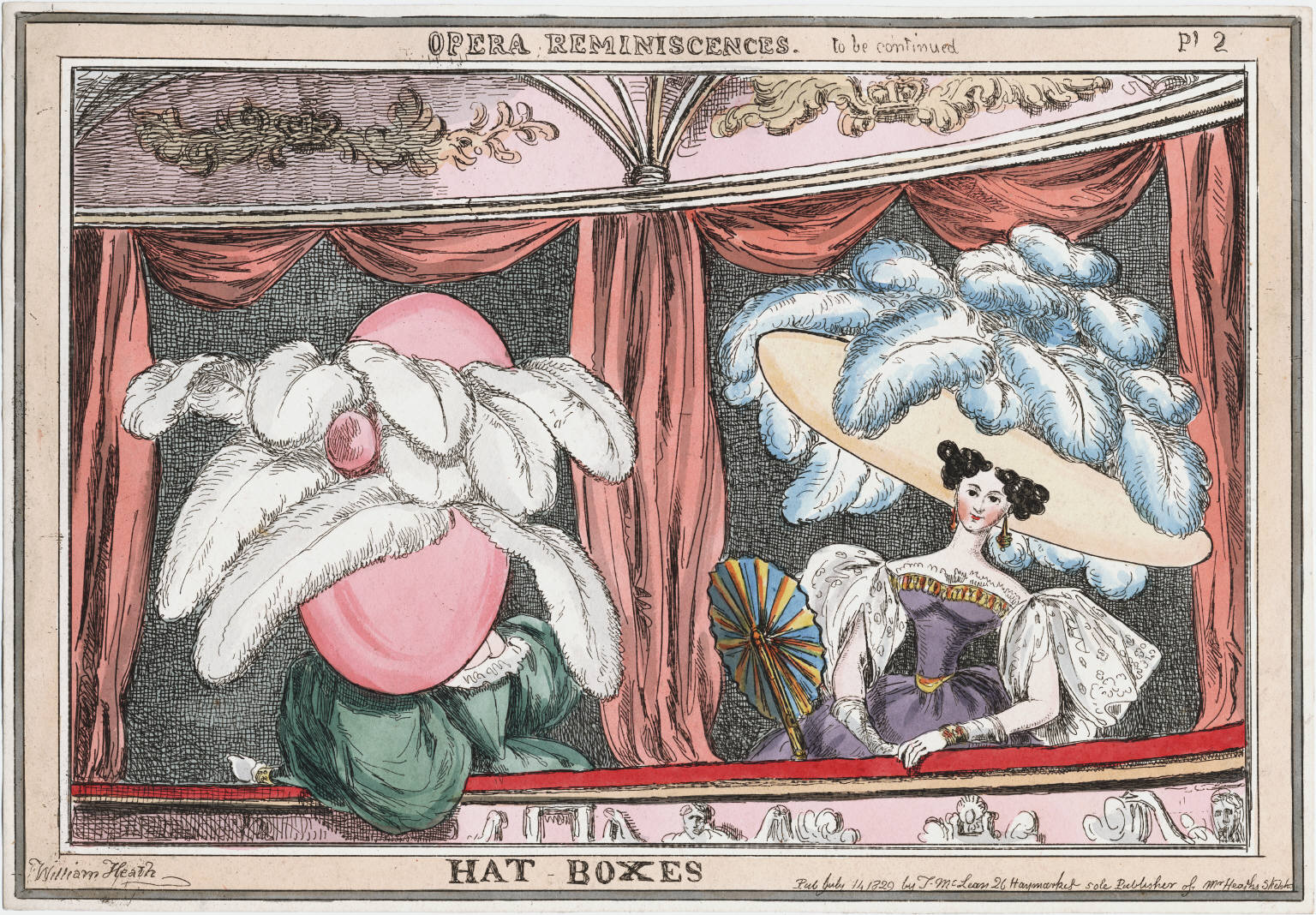 It all goes to show – the first and last pictures are half a century apart, but they both show the same thing – ladies loved to get dressed to go to the opera – to see and be seen!

Post script: the more I see of caricatures the more I become a fan of Thomas Rowlandson, so here are two of his – the first showing the rake George Hanger chatting up a pair of ladies in the theatre lobby (shown courtesy of the British Museum) and the second showing the audience during a performance. In neither case is the watching of the play especially important – it was a social event which for many of the people attending was primarily aimed at flirting, and lining up the entertainment for later in the evening. It must have been quite difficult for the actors having to contend with an audience who were drinking, playing cards, chatting with others around them, and such like. On the other hand, at least they didn’t have to contend with mobile phones going off….. 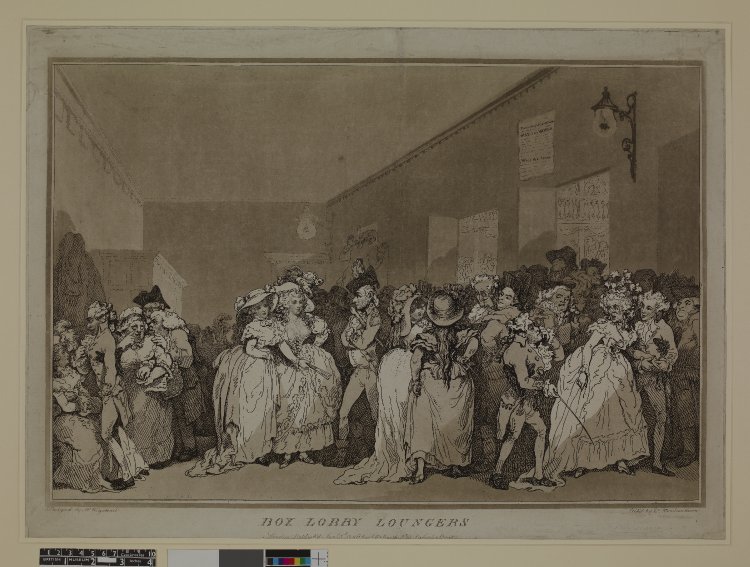 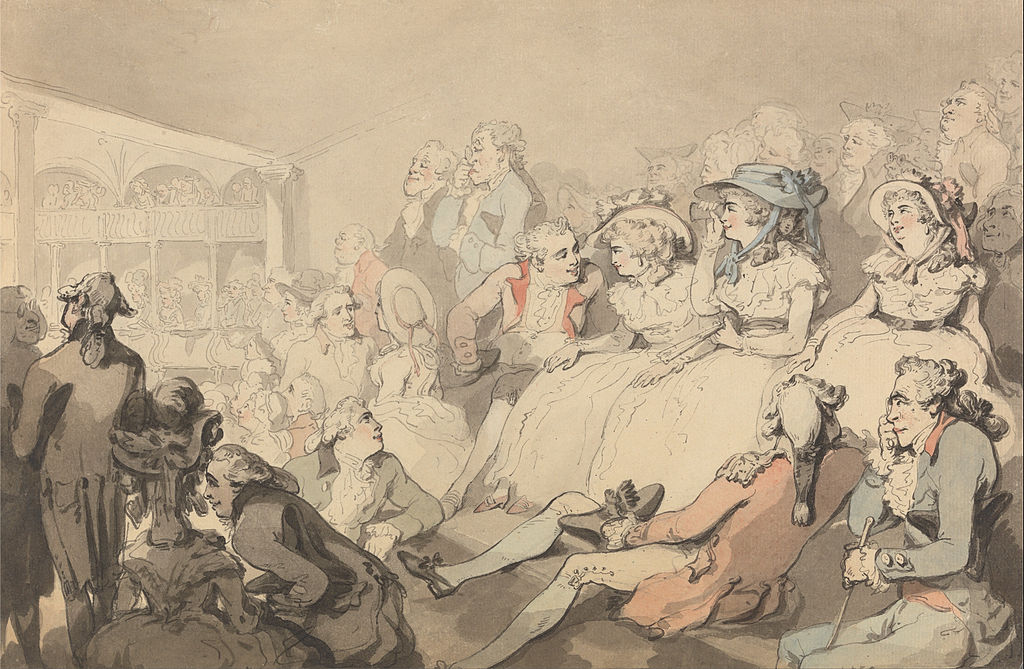 O.K., one more – “Symptoms of lewdness, or, A peep into the boxes” by Isaac Cruikshank. It appeared in 1794, is shown on the Lewis Walpole site, and features the ample charms of Maria Anne Fitzherbert and Albinia Hobart, Countess of Buckinghamshire. And yes, it is one of the images I will be using in “Sex Scandal and Satire – in bed with the Georgians.” My apologies if it appears sexist – if I had found one of half-dressed men I would have shown that as well….

I have included it because it demonstrates that the obsession of the Press with “wardrobe malfunctions”, nipples and high fashion is nothing new. The Eighteenth Century is so very like our own in certain respects! 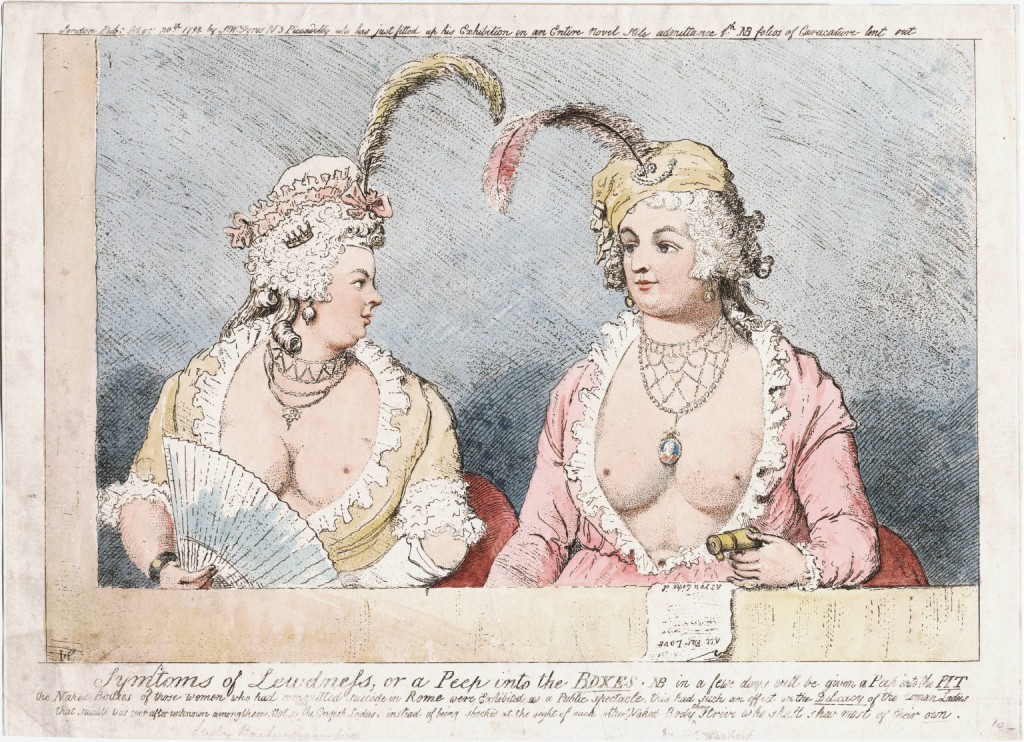 3 Responses to “Off to the opera, ladies!”