It is fascinating to read of some of the experiments which took place in the Eighteenth Century linked to the carriage – in  particular the idea of a horseless machine. When preparing a talk for the Stamford Georgian Weekend, back in September, I came across this newspaper extract for a self-moving phaeton. 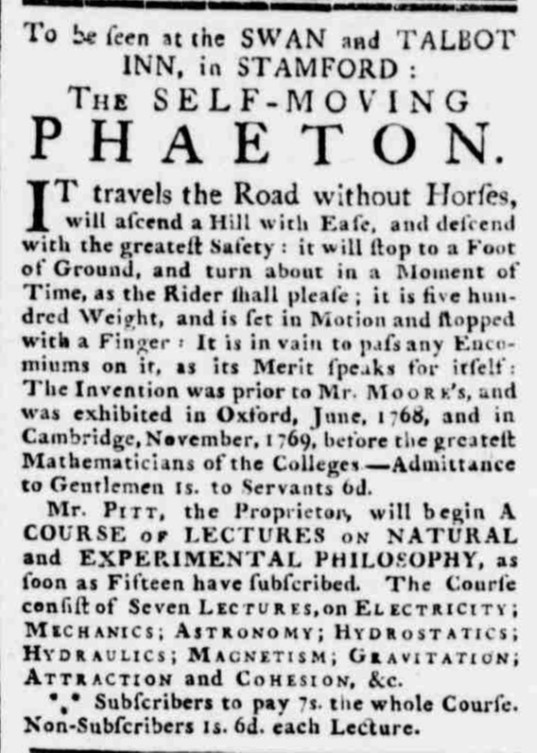 It claims to precede “Mr Moore’s machine” but all I have been able to find out about Francis Moore is that he died in 1787 and a picture of his horseless machine appears on the Lewis Walpole Library site. It dates from 1771. 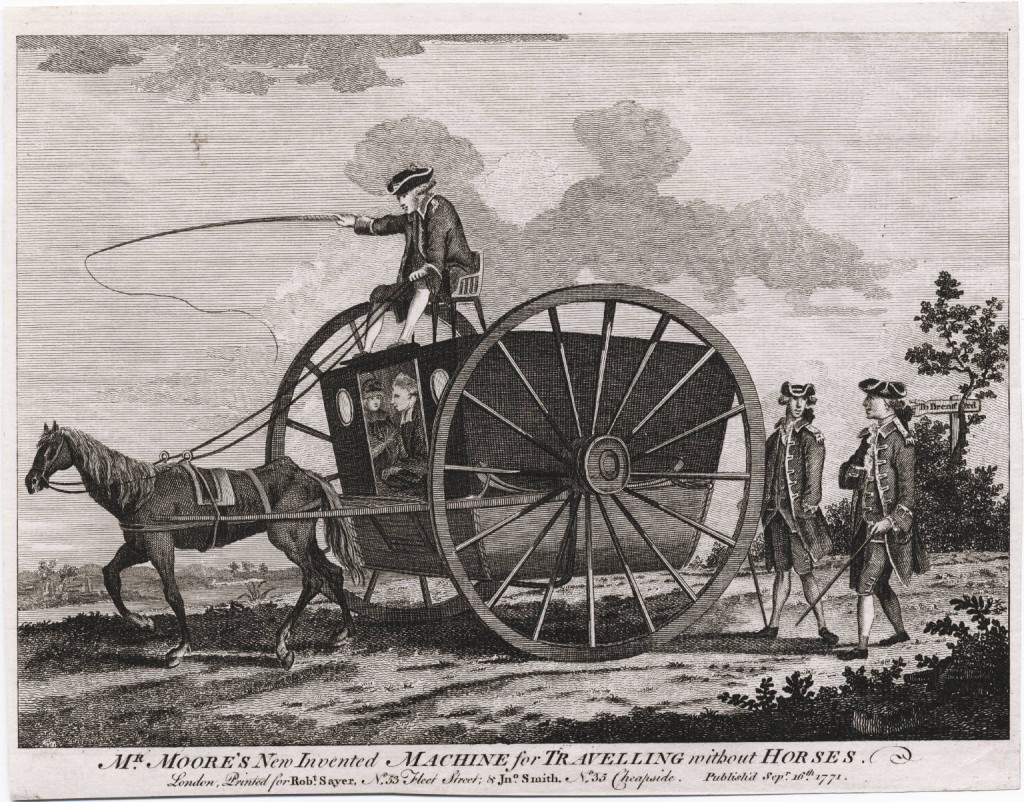 Only, perhaps I am missing something, but that looks very much like a horse pulling the carriage and isn’t the whole point of a horseless carriage that it well, doesn’t have a horse? Nice big wheels though and it made me think of other design changes.

From the same Lewis Walpole site we get this 1776 “Phaetona, or modern female taste.” I had always understood that the lady in question was Lady Archer, but quite why she has such a ridiculously small pair of horses – perhaps to contrast with her ridiculously high hat and an enormous coiffure – I do not know. 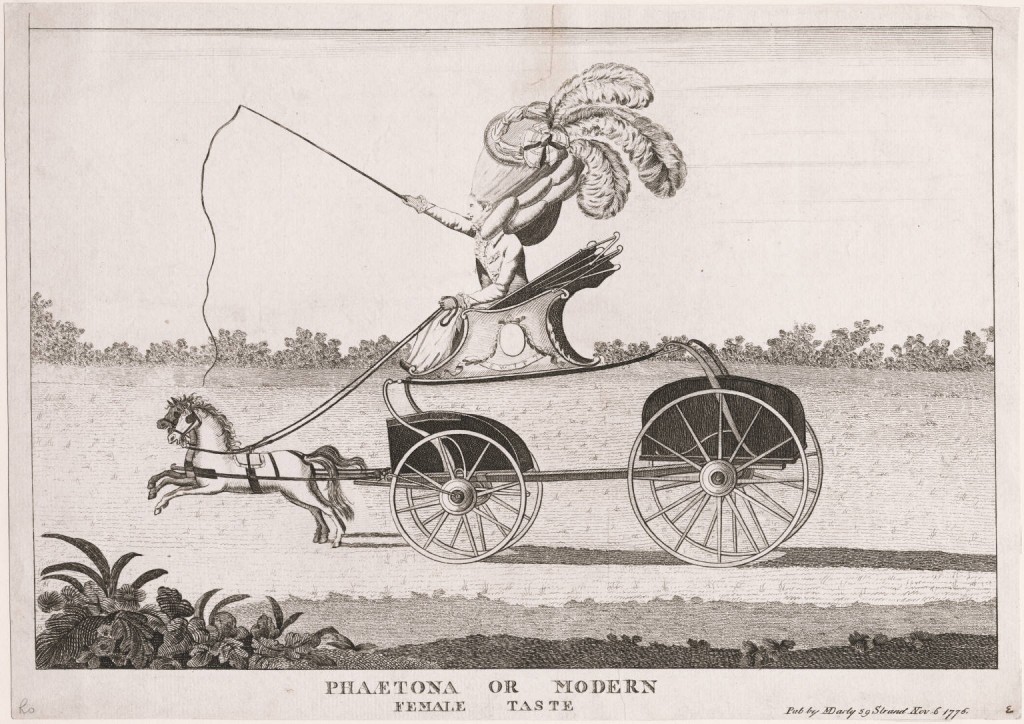 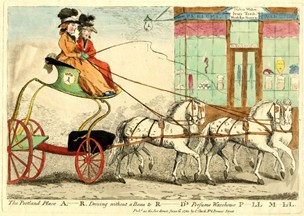 What I find interesting is the way the carriage has been elevated on high springs, a feature echoed in a print from 1767  entitled “The present age 1767 : address’d to the professors of driving, dressing, ogling, writing, playing, gambling, racing, dancing, duelling, boxing, swearing, humming, building, &c., &c., &c.” 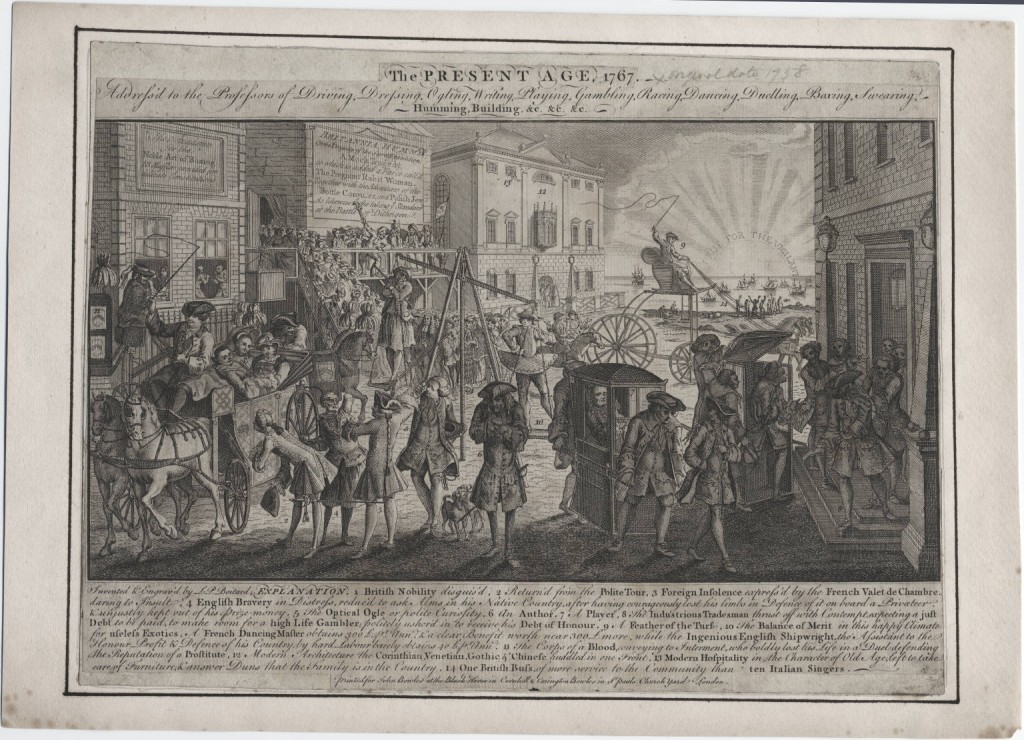 It was by L.P. Boitard, and has far too much going on for me to deal with here – save to mention the wonderful phaeton silhouetted against the rising sun. 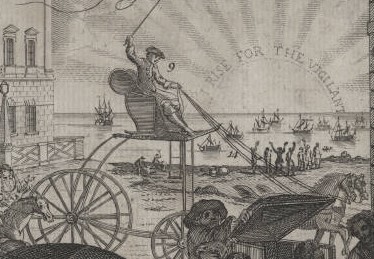 Now that is what I call pimping your carriage! You would be able to peer into the  first floor windows of all the houses you pass in that, and my, how people would notice you!

In his diaries Richard Hall mentions that the most prevalent colours for carriages in the 1770’s was bright yellow, trimmed with black  and with bear-skin rugs. I suspect that our gentleman in his high chair would be in need of a few rugs if he went out in the winter like that…

And finally, a reminder that even two and a half centuries ago you still needed to pay a licence fee if you were keeping your carriage on the public highway in London: a copy of the receipt for TWO POUNDS paid by Francis Hall (Richard’s father) in 1748.

Post script: When preparing this post I was trying to remember where I had seen a lovely print showing a fictitious phaeton with a concertina-sprung mechanism. I should have known – it is on the Lewis Walpole Library site here, and appeared in 1776. I love the idea that the fine lady, clad in an ostrich-feathered head-dress, should not be expected to have to clamber down the stairs and instead would be able to glide out through the open window in order to take her seat in the carriage. Nice one! 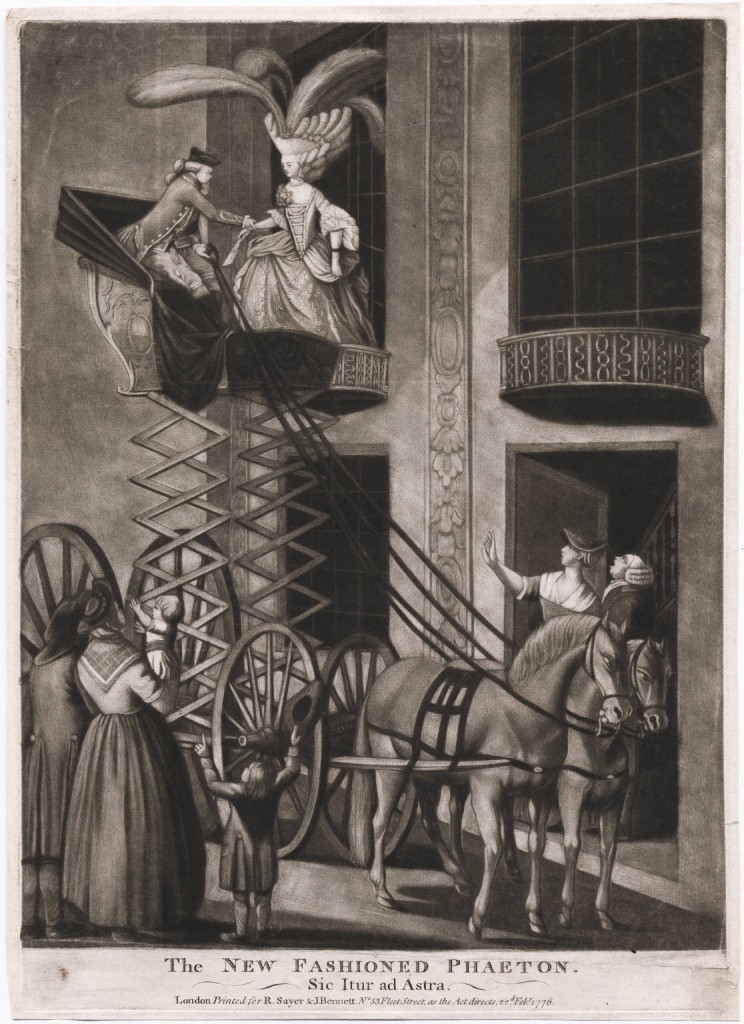 The new fashioned Phaeton – Sic Itur ad Astra –  “thus the path to the stars.” It reminds me somewhat of the Ambu-lift that airports use to convey wheelchairs up to the aircraft door, so perhaps this particular pimped vehicle isn’t quite as far-fetched as first appears!