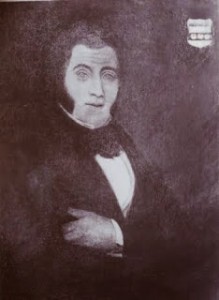 There are times when I seem to be surrounded by members of the Bazalgette family: on Sunday evenings Edward Bazalgette is up there on my TV screen,with a credit as the director of Poldark; up until last year my pension was in the hands of Vivian Bazalgette; while his third cousin Sir Peter is Chair of the Arts Council. I am always reading about Sir Joseph William Bazalgette, the 19th-century English civil engineer who, as chief engineer of London’s Metropolitan Board of Works, put an end to ‘the Great Stink’. And now I have news of another Bazalgette, Edward’s brother, now living in Canada, called Charles. He has written a fascinating book about ‘the Daddy of them all’ – a man called Louis Bazalgette, but generally known as Prinny’s Taylor.

Charles has for many years been researching the life and times of his Georgian ancestor, in what has many parallels with my own research into my predecessor Richard Hall. But whereas my ancestor kept his head down and never troubled the scorers, Louis moved in exalted circles, becoming tailor to the Prince of Wales and making many of the costumes which Prinny so adored. The amount of research is astonishing, and the result is a book which has just come out in Kindle format. You can find it  here.

If you are looking for a complete overview of Regency History, this is not for you. Rather, it nibbles around the edges of the picture, giving snippets of information about the Prince of Wales, until it builds up a fascinating insight into his life and times. Sure, some of the details may be more relevant to members of the Bazalgette family – indeed Charles never originally intended this as a book for a wider audience – but I for one am delighted that he has persevered and  “put it out for all to see”.

Some of the information about Prinny and his wardrobe is quite astonishing – the sheer volume of orders, delivered daily, sometimes as many as a hundred in one month, and on one occasion with more than twenty items being ordered on a single day.

It is interesting to read Louis’ own technical description of garments made for the Prince, often delivered in person by the ever-available tailor on the morning of the actual ball (or whatever) and comparing it with the description of it in The Times, the very next day. The Prince was for ever ordering costumes for masquerades, at Carlton House, or military uniforms for parades at Brighton. He ordered outfits not just for himself but for members of his entourage (such as Colonel Hangar). And then generally failed to settle his debts…

And what debts – far more to his tailor than to anyone else! Charles lists the amounts owed to his ancestor in detail, based upon an examination of the records at the Royal and National Archives, and builds up a picture of the incredible extravagance of the Prince of Wales. In time of course Parliament coughed up, and Louis got his money, which he then seems to have lent (sometimes unwisely) to politicians, noblemen and West Indian plantation owners. This in turn led him and his executor to endless court battles as he sought to recover debts from defaulters. 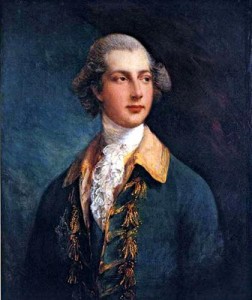 The book gives, as expected, the background as to how and when Louis came to this country from France. It gives great detail about individual costumes made for the Prince, and has a helpful appendix of tailoring terms. Indeed it would have made a wonderful fully-illustrated tome featuring surviving outfits, but alas, it is not to be. After George IV died his wardrobe of amazing costumes was sold off, generally at a fraction of their cost, and used as theatrical costumes, for fancy dress or stripped down to make other outfits. Hardly anything remains, and nothing which can be definitely pointed to as being “that was Louis’ work”. However his skills live on, in the portraits painted at the time. He was a man who shared the prince’s innermost secrets – after all, who gets closer to the future king than the man responsible for be-decking him in his finery? He must have been party to countless intrigues and royal secrets. In Prinny’s Taylor you get a great glimpse into the world of Carlton House and the Prince’s retreat in Brighton. It is a book for the connoisseur, perhaps destined never to appear in printed form, which would be a shame. Catch it while you can in electronic format – it is indeed fascinating. 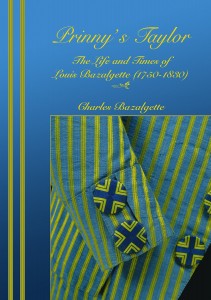 To give it its full title, the book is called: Prinny’s Taylor: The Life and Times of Louis Bazalgette (1750-1830). As the blurb says: ‘The reason why Louis Bazalgette has been a shadowy figure until now is that the relationship between the two men was discreet and almost clandestine. This biography, based upon 20 years of painstaking research, presents a detailed picture of an extraordinary man, of humble origins, whose influence on gentlemen’s tailoring, and upon the Prince himself, must have been far-reaching.. ‘

To end with, three portraits of the portly Prince  in his finery – the first dating from 1816. It is by Henry Bone, after Sir Thomas Lawrence, and below it a miniature portrait of the smartly turned-out Prince as a young man, made by Richard Cosway in 1792, © National Portrait Gallery, London. The final image is of gorgeous George, in a portrait held by the Vatican. No tailor could have asked for more… 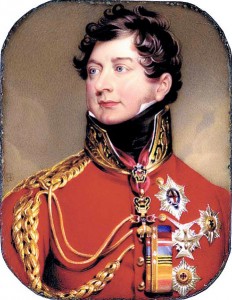 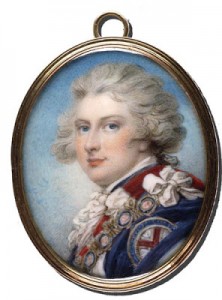 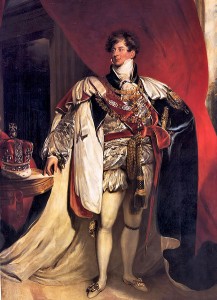 9 Responses to “Prinny’s Taylor – the story of Louis Bazalgette, tailor to George, Prince of Bling.”