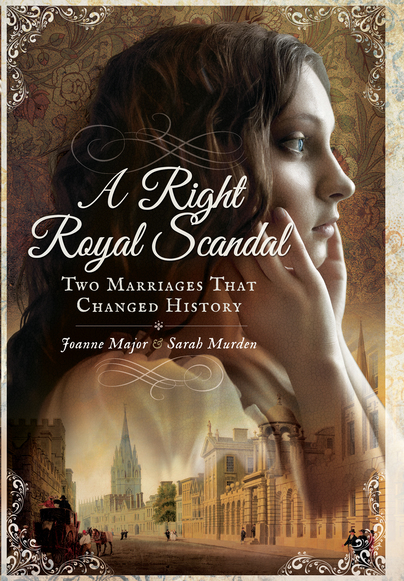 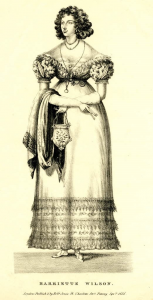 A guest post today from those prolific writers Joanne Major and Sarah Murden, fresh from having published “An Infamous Mistress The Life, Loves and Family of the Celebrated Grace Dalrymple Elliott”. The post concerns one of my favourite courtesans of the Regency era, Harriette Wilson. For those of you unfamiliar with the lady, she was one of five daughters of a Swiss watch-maker who had settled in London. Of the five, only one (known derisively as ‘The Paragon’) failed to take up harlotry. The others were highly successful in their chosen profession, but none scaled the heights like Harriette….  Over to Joanne and Sarah:

“A Right Royal Scandal: Two Marriages That Changed History” charts the successive unions of two generations of the ducal Cavendish-Bentinck family, ancestors of Queen Elizabeth II. Both shocked their family and society, but for very different reasons; the first marriage was the result of an elopement, just weeks after the Battle of Waterloo, when the Duke of Wellington’s married niece ran off with the widowed Lord Charles Bentinck, brother to the Duke of Portland.
Today we have decided to write a little about the Regency courtesan Harriette Wilson, who is mentioned often during the first half of “A Right Royal Scandal” as she was embroiled in the antics of a fair few of the main players in our book.
Lord Charles Bentinck, and his younger brother Frederick, were frequent visitors to her rooms and both were mentioned in the “Memoirs of Harriette Wilson”, written by herself, as was the Duke of Wellington, another of Harriette’s admirers. Harriette offered the men to be named in her memoirs the chance to buy themselves out of its pages, an opportunistic form of blackmail with which she even approached the Prince Regent; the two Bentinck brothers, perpetually financially embarrassed, probably didn’t have the means to do this even if the chance was given to them, and had to suffer the ignominy of seeing their names in print within its pages. But, as Lord Charles said:
We are in for it… my brother Frederick and I are in the book, up to our necks; but we shall only make bad worse by contending against it; for it is not only true, every word of it, but is excellently written and very amusing.
The Duke of Wellington supposedly, and famously, replied to Harriette that she should ‘publish and be damned!’, and he too appeared within. Harriett described him as “having no small talk, and looking like a rat- catcher”, giving rise to this caricature: 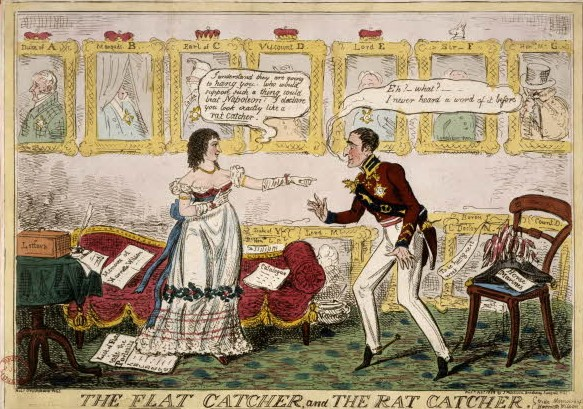 Lord Frederick Bentinck was Harriette’s ‘constant and steady admirer’ but she mocked him mercilessly, as did another visitor to Harriette’s house, the dandy Beau Brummell. On one occasion Fred was admiring his new leather breeches in Harriett’s mirror when he was rebuked for his bad fashion choice by Brummell.

‘They only came home this morning,’ proceeded Fred, ‘and I thought they were rather neat.’
‘Bad knees, my good fellow! bad knees!’ said Brummell, shrugging up his shoulders.
Lord Charles was a widowed man when he danced attendance on Harriette, and it was Harriette who introduced him to a young prostitute, known as Little Ann, who Charles took ‘into his keeping’. Lord Charles parked his mistress in rooms above an umbrella shop in Knightsbridge and his relationship with Little Ann continued until he fell for the charms of the bored, but married, Lady Abdy, and persuaded the lady to elope with him. The cuckolded Sir William Abdy paid a visit to Harriette in the immediate aftermath of the elopement, to pour out his heart to her. He received scant sympathy from the knowing courtesan.
‘That Charles Bentinck,’ said he, half angry, ‘is the greatest fool in the world; and in Paris we always used to laugh at him.’
‘But,’ said [Harriette], ‘why did you suffer his lordship to be eternally at your house?’
‘Why, dear me!’ answered Abdy, peevishly, ‘I told him in a letter I did not like it and I thought it wrong, and he told me it was no such thing.’
‘And therefore,’ [Harriette] remarked, ‘you suffered him to continue his visits as usual?’
‘Why, good gracious, what could I do! Charles Bentinck told me, upon his honour, he meant nothing wrong.’ 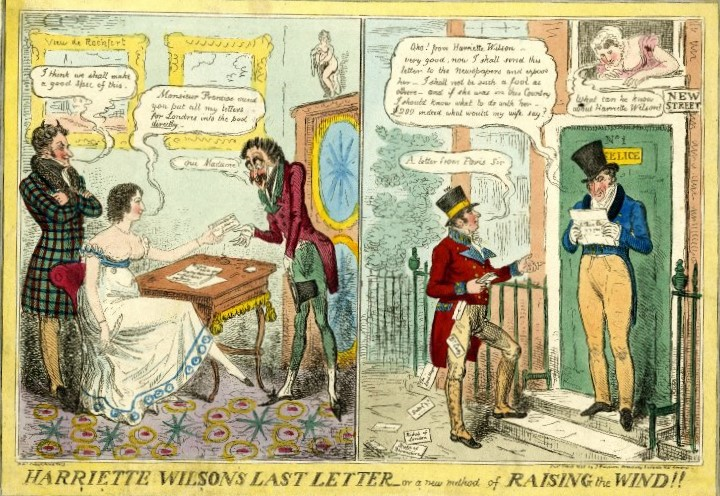 A Criminal Conversation case and a divorce were the result of the elopement, and the scandal kept the ton in Regency London occupied for many months. You can find out more about this and the second marriage of the title in “A Right Royal Scandal: Two Marriages That Changed History”, available from Pen and Sword Books and all good bookshops.
Almost two books in one, “A Right Royal Scandal” recounts the fascinating history of the irregular love matches contracted by two successive generations of the Cavendish-Bentinck family, ancestors of the British Royal Family. The first part of this intriguing book looks at the scandal that erupted in Regency London, just months after the Battle of Waterloo, when the widowed Lord Charles Bentinck eloped with the Duke of Wellington’s married niece. A messy divorce and a swift marriage followed, complicated by an unseemly tug-of-war over Lord Charles’ infant daughter from his first union. Over two decades later and while at Oxford University, Lord Charles’ eldest son, known to his family as Charley, fell in love with a beautiful gypsy girl, and secretly married her. He kept this union hidden from his family, in particular his uncle, William Henry Cavendish-Scott-Bentinck, 4th Duke of Portland, upon whose patronage he relied. When his alliance was discovered, Charley was cast adrift by his family, with devastating consequences.
A love story as well as a brilliantly researched historical biography, this is a continuation of Joanne and Sarah’s first biography, An Infamous Mistress, about the eighteenth-century courtesan Grace Dalrymple Elliott, whose daughter was the first wife of Lord Charles Bentinck. The book ends by showing how, if not for a young gypsy and her tragic life, the British monarchy would look very different today
* * *
Credits for images:
Harriette Wilson, 1806. © The Trustees of the British Museum
The Flat Catcher, and the Rat Catcher. © The Trustees of the British Museum
Harriette Wilson’s last letter, or a new method of raising the wind!! © The Trustees of the British Museum
George ‘Beau’ Brummell, from a print by Robert Dighton, 1805. Wikimedia

2 Responses to “‘Publish and be damned’ – a guest post and a great new book.”