I recently published a small volume of paper cut-outs made by my ancestor in the latter part of the Eighteenth Century. You can find it on Amazon here (UK), and here (rest of the world). It is also available on Kindle, though I have to say that I am not convinced that an e-book is the best format for intricate and tiny illustrations like paper cut-outs.

But the point of the post is this: I end the book with an illustration which completely baffles me. It is this: 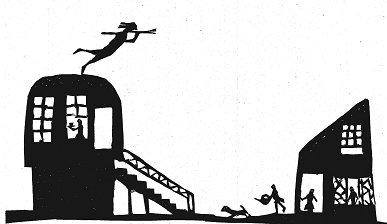 In the book I have suggested that it appears to represent a giant angel blowing a trumpet from the rooftop, above a room in which a lady is taking tea; a man emerges from a building opposite carrying what appears to be a watering can, while a dog scampers ahead….

I would be intrigued as to how others interpret the scene – everything else which my ancestor Richard Hall cut out were pictorial representations of his everyday life, the world about him. So I have deer parks, horses, troops, a sword, country houses and inns – but what on earth is this one all about? Your suggestions please (and with luck, just for once, my comments page will not consist almost entirely of spam from people flogging Ugg Boots and fake designer watches, scarves and handbags….).

Thanks for your help! 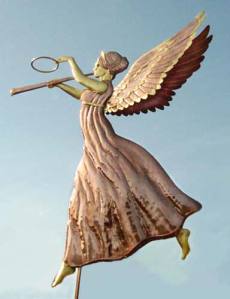 Post script: Thanks for the responses! I suspect there is some significance in the outsized angel/ weather vane, because Richard could easily have made it more to scale. I also think it may have been illustrating a poem or nursery rhyme, since forgotten. I have trawled through a variety of poems featuring weather vanes, but so far without success!

11 Responses to “Puzzle time – a paper cut out signifying …. what exactly?”