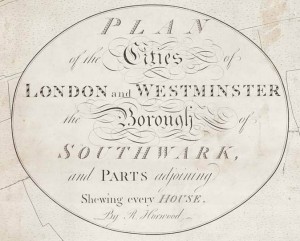 One of the great pleasures in researching for my book The Journal of a Georgian Gentleman was coming across the maps of Richard Horwood.They really are exquisitely drawn, and as the cartouche says, they show London and Westminster, the Borough of Southwark, and parts adjoining, ‘shewing every house’.

The maps were published between 1792 and 1799 but Richard Horwood is believed to have started working on the maps at least a decade previously. It really was a huge undertaking: he and his team of assistants had to scrabble around every single property, every alley way, every back garden, in an attempt to give a comprehensive plan of the whole area. Of course there were omissions – the Tower of London steadfastly refused to open its doors to the cartographers. Presumably it was classed as a military installation, given that England was at war with France. Horwood simply records that: ‘The Internal Parts not distinguished being refused permission to take the Survey’,  But astonishingly just about every other landowner consented to this  detailed study and the result, drawn at a scale of 26 inches to the mile, gives a beautiful and accurate picture of London at the turn of the eighteenth century. The map was reissued at least four times, with relevant additions and alterations, up until 1819. 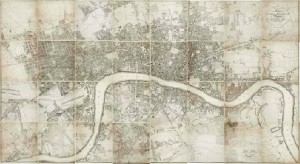 An overview of the 32 sheets making up Horwood's map

The detail is wonderful – where street numbering had already been brought in the numbers were clearly shown and where numbers had not yet been allocated Horwood made it clear that “Should the Commissioners appointed for that purpose and the Parishes think proper at any future period to make a regulation in the Numbering, the Proprietor would in that case with Pleasure furnish any Gentleman who may desire it, with a New Set of Impressions in exchange for the old, at a trifling expense”.

The undertaking must have been hugely expensive. Horwood had raised the not-inconsiderable sum of £4000 by public subscription by the mid 90’s, an indication that the idea readily found favour with landowners, surveyors and public officials anxious for a more accurate map than the outdated John Rocque plan of 1740. Even this sum was not enough to cover the cost of completing the surveying, paying for the plates to be etched, and for the Plan to be offered for sale. Horwood approached the Phoenix Fire Office in Lombard Street for a loan. 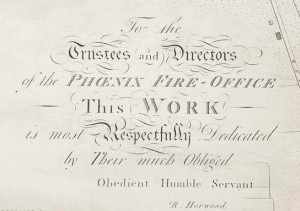 The Phoenix Fire Office put up £500 and agreed to pay another twenty pounds on promoting the Plan through advertising. In return Horwood agreed to dedicate the map to the Phoenix and this dedication is shown here:

I love the maps because they conveniently identify the exact premises constructed by my ancestor Richard Hall at Number One London Bridge. That address is nowadays allocated to a glass and concrete monolith south of the river, but in the 1790’s it was the address of my  forebear’s shop on the north side of the Thames. I still have his accounts showing the building cost  (£850) and surveyors fees of £228 (even the paper hanging expenses of five pounds sixteen shillings). 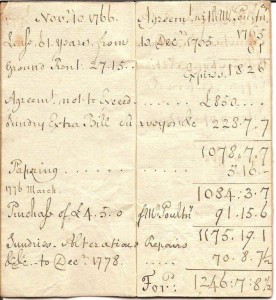 But I had always assumed the building was in Southwark until I came across an envelope addressed to Richard, describing his house as being next to St Magnus the Martyr church. The Horwood map bears this out – there are three houses built next to the waterwheel, right on the approach to London Bridge, and just over the road from Wren’s masterpiece. Richard’s shop is shown as the building in the corner of the quadrant formed by the Bridge as it joins Lower Thames Street. 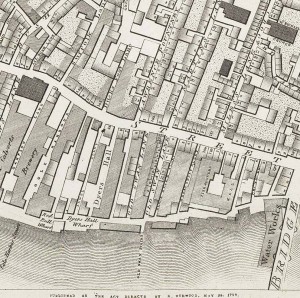 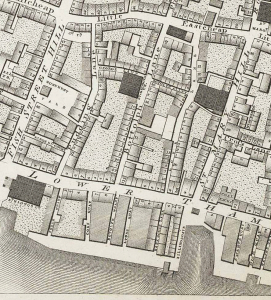 The book explains the history of the shop – how it was nearly burned down on 31st October 1779 by a disastrous fire which destroyed the adjoining hop-house and which reduced the waterworks to the level of the Thames. Frightening for Richard, who was forced to take refuge in St Magnus Church, and irritating for the wealthy householders who no longer were able to draw water from the elm conduits which until that night had been used to pump water from the Thames to their premises, for several hours a day.

Richard’s son Francis  succeeded to the business when Richard died in 1801, and Francis kept the shop until the lease expired on Christmas Day 1826. Closing the shop, selling the stock, and moving out into a new home must have been too traumatic for Francis: he too expired, on the very next day (26th December 1826). 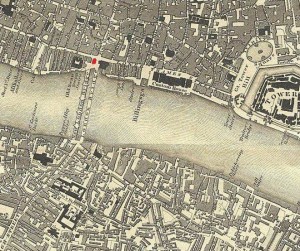 And the house at One London Bridge? It was to be demolished within a few years, to make way for road re-alignmnets linked to the new London Bridge, designed by Rennie and opened in 1831. Meanwhile a different map-maker, the Greenwood brothers, 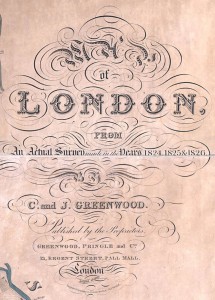 brought out their own map in 1827 and the two bridges, old and new, can be seen side by side. One London Bridge was still standing, but within a couple of years both it and the old bridge had gone for ever.

But what of Richard Horwood the man? Very little is known about him. He was born around 1757/8 and died in poverty in Liverpool in 1803. Horwood had gone to Liverpool to prepare a set of maps of that city, and six sheets were finished.

To end with, the Horwood map showing where Richard Hall was born, at Red Lion Street in Southwark:

Post-script:  Copies of all the  Horwood plans, of a higher quality than the ones shown here, are available at the splendid MOTCO site at http://www.motco.com/map/81005/  I used them for copyright versions of the maps used in my book and they really were most helpful, to the extent of sending off a CD-Rom to the publishers at very short notice, and e-mailing me from France to confirm that it had been done. Scroll through their website and you can find places using their index of 5500 names. A wonderful way of spending a spare hour or two!