Rowlandson, and those six stages (with a little boxing history thrown in for good measure).

I have often come across the waspish Thomas Rowlandson caricature of Lady Sarah Archer entitled  Six Stages of Mending a Face  – and indeed included it in my blog about the harridan here. 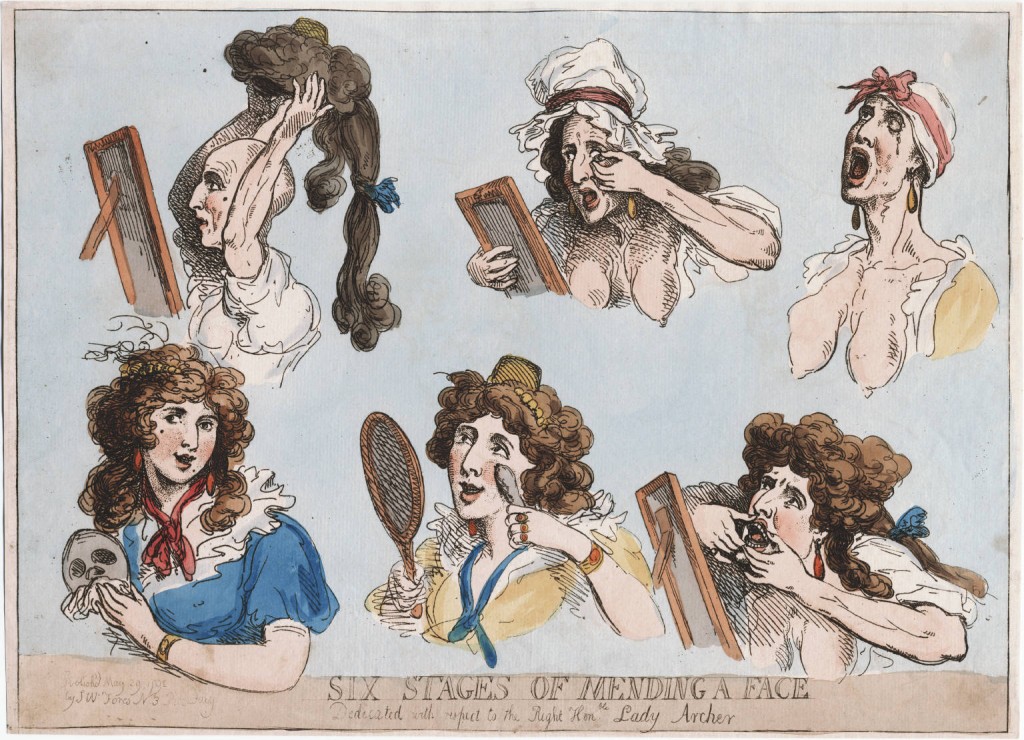 But what I had not appreciated was that it was published the very same day  (May 29th, 1792) as another Rowlandson print, presumably as a companion-piece, entitled  Six Stages of Marring a Face, showing a man’s’ visage as it is pummelled during a bare-knuckle fight. So on the one hand you have a female vanity, and on the other male brutishness. An interesting comparison, and as usual the images come courtesy of the Lewis Walpole Library site. 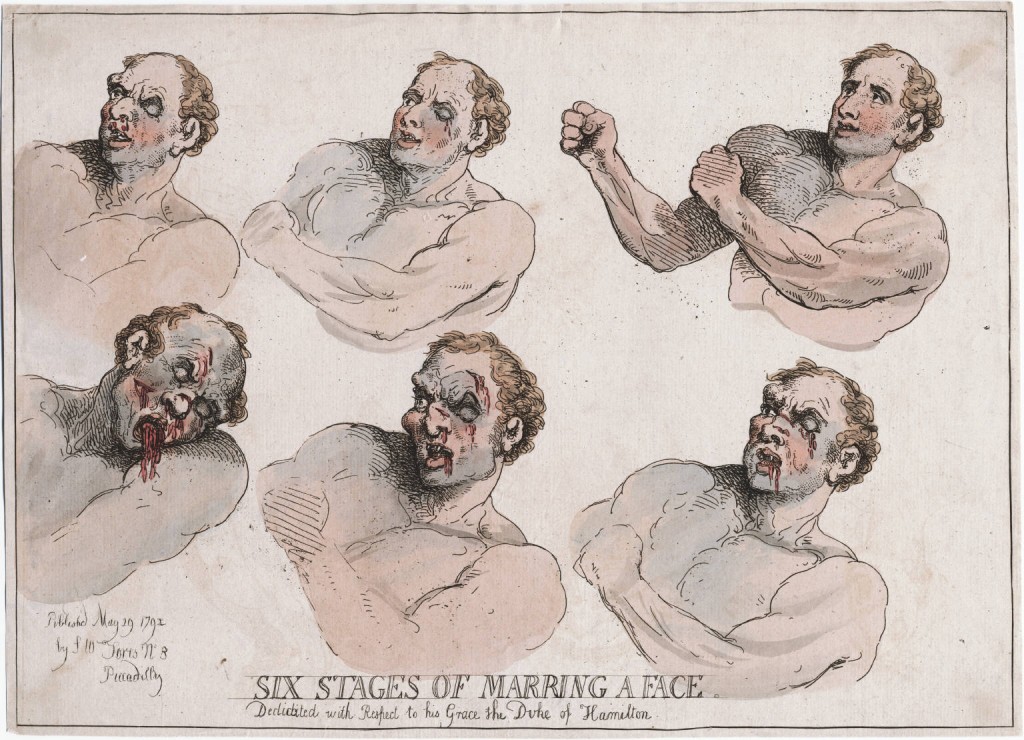 The other point to note is that  there were virtually no rules in boxing until mid-way through the century – apart from ‘no biting and no gouging’. It took the death of Yorkshireman George Stevenson to bring about the first attempt at formal rules for all bouts. He had fought the English champion Jack Broughton on the 17th February 1741. This was in a fairground booth on Tottenham Court Road. Unfortunately, Stevenson died a few days after his 45-minute fight, as a result of injuries sustained during the fight. Broughton was very upset by this and the death prompted him to draw up a code of rules in order to prevent a recurrence.

Published on 16 August 1743, ‘Broughton’s Rules’ were intended to apply to all bare-knuckle Prize fights and included ‘That no person is to hit his adversary when he is down, or seize him by the ham, the breeches, or any part below the waist; a man on his knees to be reckoned down’.

Otherwise much was left to the discretion of referees. Rounds were not of a fixed length but continued until one of the fighters was knocked or thrown to the ground, after which those in his corner were allowed 30 seconds to return him to the ‘scratch’ – the middle of the ring – failing which his opponent was declared the victor. So “not up to scratch” meant not good enough to continue”

Incidentally it was also Broughton who first introduced mufflers – an early form of boxing glove. Never intended to be used in the ring they were devised as a way of ensuring that inexperienced boxers did not get too cut-up and damaged during training bouts.

And to end with, a nice reminder that ‘the fairer sex’ were also a feature of many a boxing booth, Particularly in the first part of the century, women would fight other women – and occasionally men. Needless to say these encounters were hugely popular with the largely male audience, if only because the women’s clothing invariably got ripped once a fight got under way, leaving little to the imagination….

This apparently shows Elizabeth Stock, a well known female boxer, on her way to victory in the 1720’s. Under her maiden name of Wilkinson  she was known as ‘The Cockney Championess’ but after she married Mr Stock, who ran a boxing booth in London, she aspired to the grand title of ‘European Championess’

Post script: never one to duck the issue, here is a mezzo-tint from May 1776 courtesy of the British Museum entitled “Sal Dab giving Monsieur a receipt in full”. It was apparently  a satire against the French, with a fist fight  out in the street between an English fish-wife on the right, and a Frenchman; There are three bystanders, including a fishwife who holds out a lobster to pinch the foreigner’s bottom.

1 thought on “Rowlandson, and those six stages (with a little boxing history thrown in for good measure).”