Ruminations on Poldark – will the heroine wear patches? The take-up on make-up.

A recent Tweet about the new series of Poldark (due to be screened next year) got me thinking about Eighteenth Century make-up, and in particular about face patches/mouches/Court plasters (call them what you will). They were especially popular in the previous century but still remained fashionable until the end of the Georgian period. 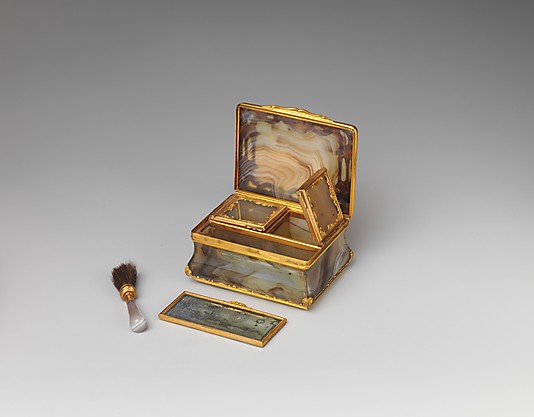 A stunning gold and agate box for patches and rouge, c. 1750. Shown courtesy of the Metropolitan Museum of Art 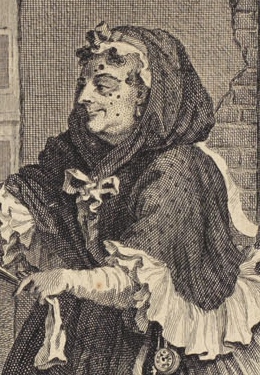 The patches seem to fall into two separate categories – those worn for high fashion, and those worn to hide pock marks (or should that be pox marks….). The disfigurement cover-up is understandable. Smallpox affected perhaps a quarter of the population, and frequently left the sufferer with facial blemishes. To reach adult-hood and have a perfect complexion was unusual.

Even worse, the great pox (as venereal disease was known) and its treatment with mercury, frequently caused dreadful facial disfigurements. Small wonder that ladies with ravaged faces sought to hide the  blemishes either with a thickly applied make-up, or with patches.

Looking at the patches worn wholly for fashion, you need to remember that a porcelain-white complexion was a sign of high class – after all, the lower orders had to work outside and so had ruddy complexions. Her Ladyship distanced herself from such labourers by emphasizing her pale skin, often slathering on white lead. Yes, it was poisonous, and yes, that was known at the time, but it did not prevent those dedicated followers of fashion from literally killing themselves to look as white as a sheet.

How to get the white lead? According to Fenja Gunn,  in  The Artificial Face, you needed the following:
Ingredients:

Steep the lead in the pot of vinegar, and rest it in a bed of manure for at least three weeks. When the lead     finally softens to the point where it can pounded into a flaky white powder (chemical reaction between vinegar and lead causes lead to turn white), grind to a fine powder. Mix with water, and let dry in the sun. After the powder is dry, mix with the appropriate amount of perfume and tinting dye.

Sounds delicious, especially with all that horse manure!

A face balm could also be made using a concoction of almond oil heated up with spermacetti (a waxy substance found in sperm whales, normally used in candles) mixed with a tablespoon of honey.  Just don’t go out near wasps or bees afterwards…

Men as well as women would whiten their skin. The patches were then applied as a contrast – drawing attention to the pale complexion.They could be kept in a small patch box, and the patches might be made of  silk or black paper (in which case they might be applied simply by affixing to the face with a bit of lick) or of velvet, taffeta or leather (in which case a dab of gum arabic might suffice). 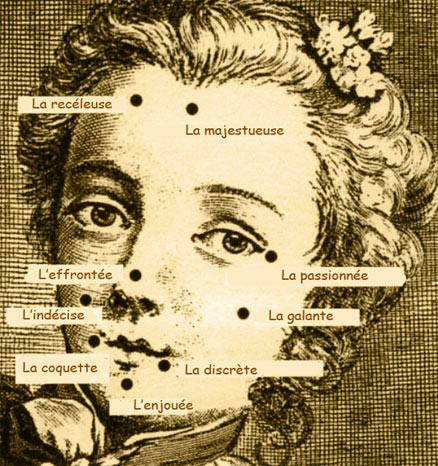 There was a whole language attached to where the patch would be worn, borrowed (of course) from the French. Supposedly, you could show your political complexion by whether you wore your patch on your right cheek or on the left. But ladies would use the patches as a language of flirting – for instance, a patch above the lip invited kissing. Those lips would be coloured with carmine – sometimes bright red but generally pink, applied with a pad of colour-impregnated wool or hair, called  spanish wool. The red effect could also be achieved by dabbing on  vinegar (fancy a snog anyone?) or distilled alcohol ( yes please!). By the middle of the 18th Century  coloured lip-balms became available, made from a mixture of carmine and Plaster of Paris. The fashion was for small, bee-sting (i.e. rose bud) lips – and colour might be applied by both genders. You only have to think of those ludicrous macaronis… 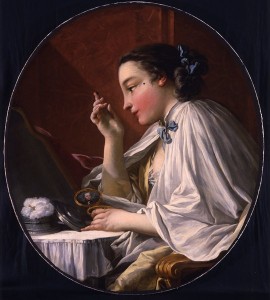 Dame a sa Toilette, by Boucher

Back to the patches – they came in all shapes and sizes and a lady might wear a dozen or more at one time. You might fancy a heart-shaped one, or a starry one – or even group them together to make a sort of stylized picture on the cheek or side of the neck. A sort of  dot-to-dot adhesive tattoo!

Other positions for patches had different meanings: just by the eye indicated passion; a heart shaped one on the left cheek showed that you were engaged  and on the right that you were already married. On the nose was saucy, and in the centre of the forehead – dignified. A beauty spot on the breast  was said to indicate a murderess – but then again, some books say that it denoted generosity! Wear two down your decolletage and perhaps you were murderously generous! Or a generous murderer…It is useful to remember that the neck, shoulders and bust were also whitened, not just the face, and for added glamour a lady might accentuate the veins on her breasts with blue lines.

Eyebrows were often plucked – either that, or were the first thing to disappear as a result of the white lead. This resulted in  people having to cut strips of mouse  hair to be glued in place, and of course sometimes they came loose during an evening’s entertainment, which must have looked most odd. Even Jonathan Swift commented on the fashion:

(Regular readers of my blog will know that the same poor mouse was also used to provide pubic hairpieces called merkins, link here).

The fashion was for eyebrows to be half-moon shaped, tapered at either end, and an especially pleasing effect could be obtained by the judicious application of lamp-black (i.e. soot) or  burnt cork, or even elderflower berries. Rouge would be used to accentuate the white skin – again, more lead-based products! The red would come from  vermilion obtained from mixing ground-up cinnamon with mercury, or from carmine (red lead).  Other colourants came from vegetable sources such as  wood resin and sandalwood, which would be pulverized and then mixed with grease or vinegar to make a paste. 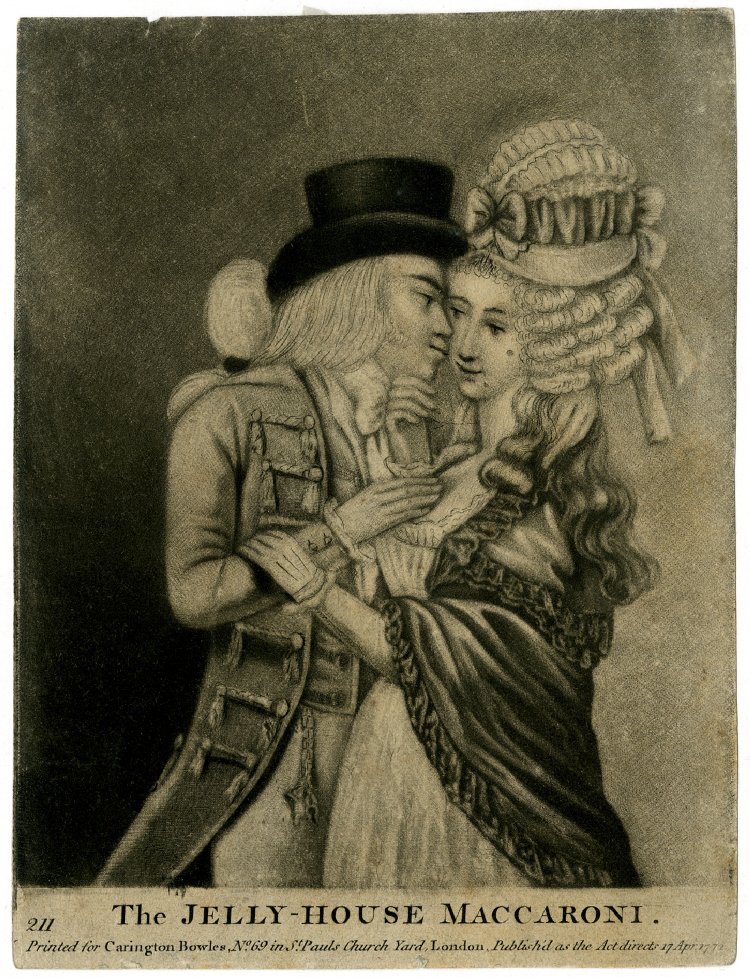 The Jelly-House Maccaroni, courtesy of the British Museum. Spot the spots!

And then of course there was the high point of your  toilet – the wig. It was a bit of a nuisance having to keep putting on powder in order to keep the dratted thing white ( the hairdresser used a puffer, while Her Ladyship protected herself with a conical mask) so the fashion developed for applying lard to the wig, so that the powder stuck to it and lasted for days. No wonder lice and other insects were attracted to the smelly concoction, and there are even tales of mice nesting in wigs which were not regularly taken off and brushed through. For ladies the wig powders were often a bluish white. The poorer fashionistas and wannabees might use flour, whereas the aristos would  powder their crowning glories with dust – obtained from white lead. Lead was a Bad Thing. It caused hair loss, vomiting,  acute head aches, bowel problems, blindness, and, even paralysis and death. Add that to a regular ingestion of mercury and it is amazing anyone reached adulthood! 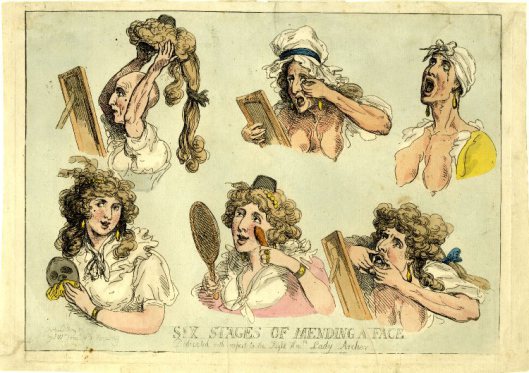 Rowlandson’s Six stages of mending a face, dedicated to Lady Archer. In the finished face – bottom left, she sports patches on her chin and cheek

I have blogged previously about the much-rouged Lady Archer – see this link – and I particularly like the image of her driving her phaeton and four to her favourite perfumier and cosmetic seller in Pall Mall. She was indeed a painted lady – and make-up was actually called just that – paint.

As far as I can  decipher this one, a Gillray called The Finishing Touch, it shows Lady Archer holding a rouge pot in her left hand while applying a copious amount of her trademark rouge to her right cheek. In fact I bet the old gal used a trowel… 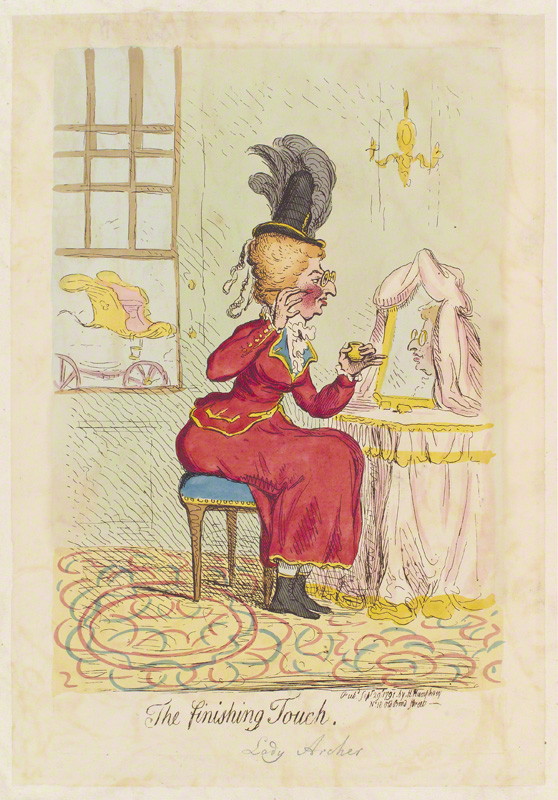 Post-script: My understanding is that the new eight-part series of Poldark, starring Aidan Turner as Captain Ross Poldark and Eleanor Tomlinson as Demelza, will be shown on BBC1 some time next year. It will be shown after the watershed so expect  lots of swash-buckling, plenty of shots of lanterns moving through swirling mist, and hopefully some  steamy moments! I well recall the last series, aired between 1975 and 1977, so I look forward to the new series with anticipation – if only to see if the gorgeous Demelza sports her patches. For fashion reasons of course, not to disguise her ravaged face!

2 thoughts on “Ruminations on Poldark – will the heroine wear patches? The take-up on make-up.”