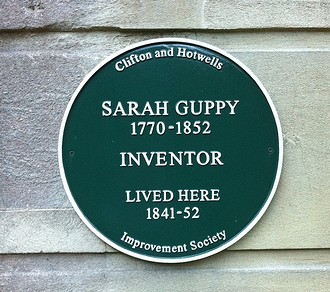 I used to live in Richmond Hill in Bristol and was aware of the green plaque a few doors down advising the world that it used to be the home of Sarah Guppy, an English inventor who lived between 1770 and 1852. Indeed I always parked my car in the tree-filled garden opposite her home at 7 Richmond Hill, unaware that she had bequeathed it to the city on condition that it was not built upon. It remains as a delightful, quiet, enclave right in a busy part of the city.

But what of Sarah Guppy the inventor? It is fair to say that female inventors are few and far between in the Georgian and Victorian era, for one very good reason. If a woman was married she could not own property in her own name – and as a patent was intellectual property this meant that a woman could not apply for a patent in her own name and had to do so via her husband.

Nevertheless Mrs Guppy can lay claim to an extraordinarily eclectic mix of inventions. Where for instance would we be without a device to prevent barnacles forming on boat hulls? She earned a contract with the British Navy worth £40,000 for that one. Or even more usefully, for the safe piling of bridge foundations (patented in 1811 and used free of charge by Thomas Telford when building his bridge over the Menai straits, and by Isambard Kingdom Brunel with the Clifton Suspension bridge some ten years later). She never sought to charge a licence fee for her pile-driving ideas because she regarded them as being for the public benefit.

She also put forward a scheme to prevent soil erosion on railway embankments by planting willow and poplar trees, while my favourite invention was one which modified a samovar-type of tea urn to enable you to boil an egg in the steam while at the same time keeping the toast warm on a steam-heated metal plate. An ideal breakfast maker in fact! 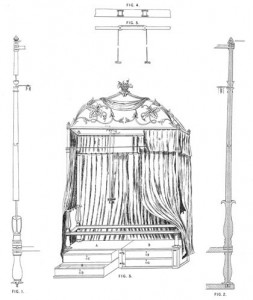 In between time Sarah invented a way of keeping fit in the bedroom – patenting a sort of hybrid bed-come-gym, with drawers beneath the bed forming steps for exercise, and with bars suspended from the ceiling for developing upper-body strength.

Other patents covered a type of fire hood for the kitchen. She also devised a modified candle holder which would enable candles to burn for longer, and a method of caulking wooden boats so that they were more sea-worthy.

In all Sarah took out ten patents in the late Georgian and early Victorian period – a remarkable achievement.

She had been born Sarah Beech in Birmingham into a wealthy family with trading links to the West Indies (in particular with the sugar trade) and had married Bristol trader Samuel Guppy. At first they lived in Queen Square and later in Prince Street and quickly became the focus of Bristol society. They were a glittering and successful couple, well connected with leading figures of the age especially Brunel. She had six children including Thomas Richard, who went on to become one of Brunel’s assistants. 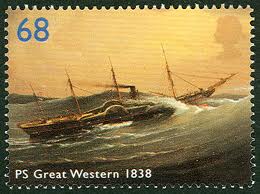 When her first husband died the 67 year old Sarah made an unfortunate decision to re-marry. She took as her spouse one Richard Eyre-Coote who was still in his late thirties.

For Richard, his wife’s money meant a life of profligacy and gambling, particularly on the horses, and before long Sarah moved out of their home at Arnos Court Brislington and bought 7 Richmond Hill where she remained until her death at the age of 82. By then all her money had gone, squandered by her second husband. There’s a lesson there for all cougars….