Writing in Mansfield Park, Jane Austen has her heroine Fanny Price remark that she would find solace in “ the room…most dear to her” and describes “the table between the windows covered with work boxes and netting boxes”.

Sewing and embroidery provided one of the few  artistic outlets available to women, and I thought it would be interesting to look at the sewing boxes as they developed during the Georgian era. To start with, needles and bodkins were typically kept in fabric rolls. This is an example sold by Bonhams in 2004 and is described as being ‘an 18th Century silk and silver wire floral embroidered pincushion, with blue velvet ground, with red felt needle roll.’

Another was designed to keep pins and needles inside a ‘notebook’ style container. It is described as being done in “Flame-stitch or Irish stitch canvas-work. It has a pink calamanco lining and binding tape in a herringbone pattern and contains two interior pockets. It also reveals four scalloped leaves of dark olive green wool with napped surface; these retain large pins with wrapped heads and very fine needles. It also has a loose triangle of binding tape which was used as fastening.”

Sometimes the needles were kept in elaborately decorated metal cases – this one made of enamelled copper (courtesy of the Philadelphia Museum, and dating from 1770). At the end on the right can be seen the retractable tape measure.

These bodkin containers were then kept with the actual work-in-progress in baskets, as seen on the table in this extract from the painting by Francis Wheatley of Mrs Pearce dated 1786. 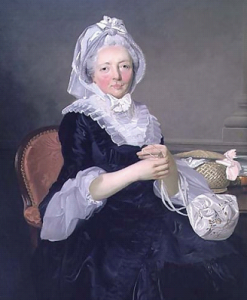 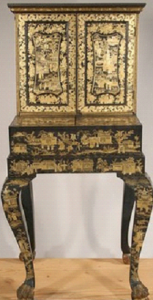 In time, furniture evolved to contain the sewing paraphernalia. Not all were as elaborate as this lacquered wood and ivory example. Thomas Sheraton  defined sewing or “pouch tables” as “Table with a Bag, used by Ladies to work at, in which bag they deposit their fancy needlework.” Later Regency examples had a netting bag underneath, in which fabrics etc could be kept.

But I am a sucker for boxes, and love the elaborate and clever portable sewing containers which could be taken by a lady on her travels. Hamptons Antiques have a number of delightful examples in their current magazine. 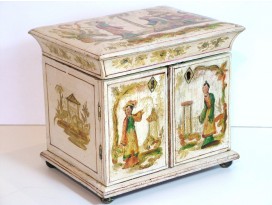 This one was made around 1820 and is described as “an exquisite little Regency Cream & Gilt Japanned Sewing Table Cabinet. Decorated on the top & front with gilt chinoiserie and brightly coloured figures set in exotic landscapes. The sides, back and interior show further exotic scenes on a cream back ground.” 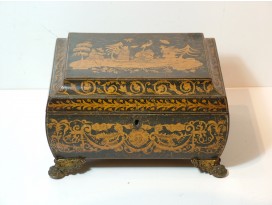 Or this lovely pen-work sewing box made around 1830, which is described as being “a Bombe shaped regency pen work sewing box decorated with a scrolling leaf pattern and a central portrait of a woman’s face on all four sides. The top has an oriental scene with three Chinese women and a man holding a staff / flag. The interior sycamore tray has a pen work leaf border to its sides and a removable pin cushion again with the same pen-work border. The box is lined in a pale blue paper with the tray having several compartments removable silk pin cushion, thimble holders and central tool pad.”

My own favourite is this little beauty, which can also be seen on the Hampton’s website at http://www.hamptonantiques.co.uk/  I can quite see Fanny Price carefully putting her sewing implements away tidily before packing the box with the other items needed whenever she left home… 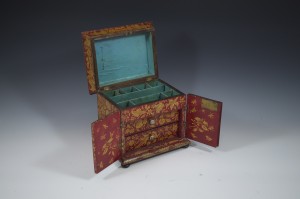 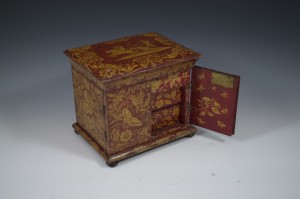 8 Responses to “Sewing with Jane Austen”