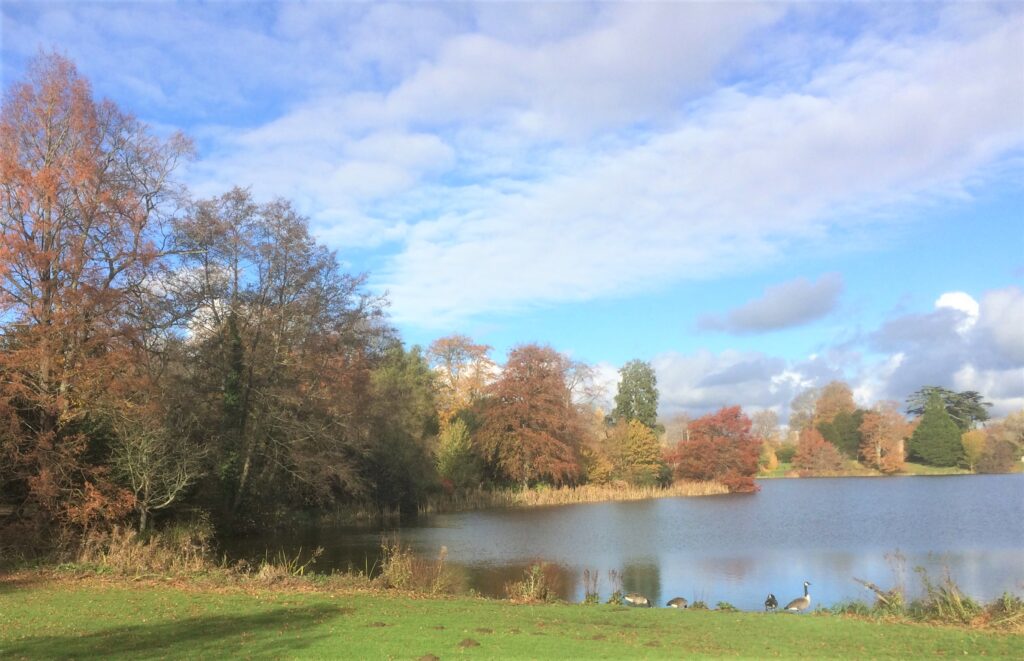 It is a strange experience – moving to a new area (Sherborne in Dorset) and not being able to look around local places of interest because of lock-down, and realizing that after twelve months I had never even seen inside the local castle. Perhaps we get blasé – there are, after all, two structures called ‘castle’ in Sherborne. The first is a proper ruin, having been built in the 12th Century. Mind you, I do a feel a tad responsible for the fact that it is a ruin – in the English Civil War it was a royalist stronghold and troops loyal to Cromwell  twice laid siege.  It was my ancestor Thomas Fairfax who then ordered it to be pulled down. He did a fairly good job of the demolition and what remains has largely been preserved as a sort of folly, to be looked at from the new castle, built on raised ground on the other side of what was then the River Yeo, and which is now a rather splendid lake laid out by Lancelot ‘Capability’ Brown. 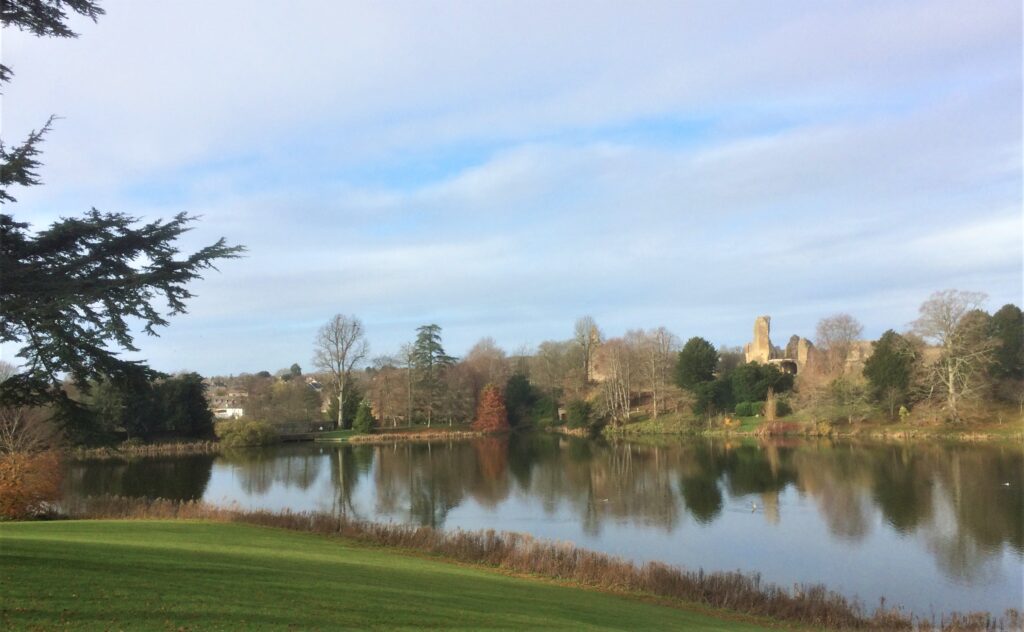 The ruined old castle, viewed from the lawns of the ‘new’ castle

It was one of Brown’s first commissions, and is a reminder that first and foremost Brown was a superb water engineer. Other ‘ye olde features’ were added to improve the vista of the ruins – crenellated boundary walls, suitably distressed, and a ruined tower were eighteenth century additions. What is so effective is that very little has been doctored since Brown’s visit – the design has not been significantly changed in 250 years. Some of his ‘signature’ cedar trees have not survived but the whole estate is beautifully maintained. Watching the seasons change while walking round the lake has been a joy – but up until now Covid restrictions meant that the new castle, site of Walter Raleigh’s hunting lodge, has been out of bounds. 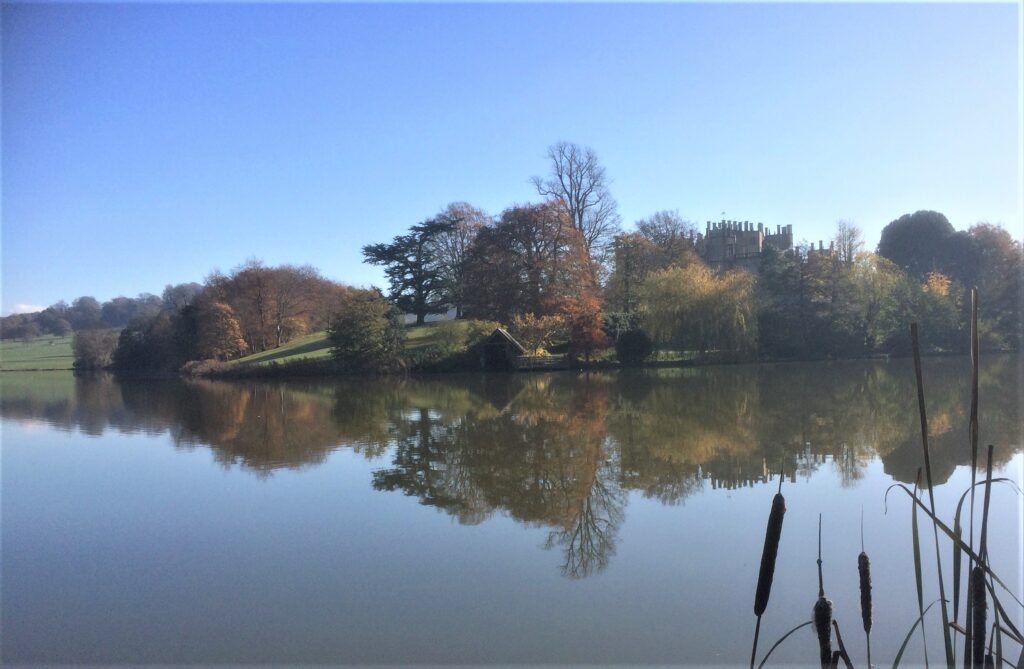 Poor Walt: he bought the old castle off the Crown in 1592 and tried to modernise the 400 year-old structure in order to make it homely. It was an impossible task and after a while he gave up and in 1594 turned his attentions to the hunting lodge built in the deer park by the local bishops, and who liked to  spend their recreation time there observing the deer in the episcopal park. Walt put up a slightly austere hunting lodge – rectangular and four storeys high, with large square-headed windows filled with diamond pane glass. When he got carted off to the Tower, the Crown took back the property, and in 1617 gave it to a diplomat called Sir John Digby. Good Sir John  added four wings to Raleigh’s building, giving the house its present H-shape. It means that there are towers and turrets in four corners, linked by corridors at the sides, and providing for two courtyards, front and back, within the ‘H’.

When later members of the Digby family inherited the stately pile they wisely decided not to go overboard with ‘Georgianising’ the structure. Not for them porticos and temple facades and other bits of Palladian nick-knackery. They contented themselves with  putting in sash windows, panelled doors and white marble fireplaces. Other than that they filled the house with fine furniture. The family even invited King George III to come and visit, with three of his daughters in tow. That meant that 1789 was spent with even more shopping for fine furniture, even more decorating with sumptuous fabrics. By then Capability Brown had finished tinkering with his lake – started in 1753, but with the accompanying landscaping not finished until Brown returned, twenty years later.

I am sure that in the intervening centuries the Digby family – they are now the Wingfield Digby’s – have been assiduous in  tweaking and improving, but the delightful thing about  the castle is that there is very little evidence of any such tinkering. It is still a home. It is still filled with paintings and fine furniture. The park still has deer in it – including at least a couple of white harts if my eyesight serves me correctly, and there are still swans serenely patrolling the lake with their cygnets in tow. Near to the house you can still see the game larder on stilts, where meat would  be hung until suitably ‘gamey’. Next to it, the ice-house serves as a reminder of the  show which the wealthy Georgians loved to put on, impressing their summer visitors with sorbets and other treats, preserved by keeping ice and packed snow in underground vaults throughout the Spring and early summer. The eighteenth century glass house has given way to an orangery, toilet facilities and a Tea Room have been created, but by and large it is all very much as it has been for the past couple of centuries.

The room described as the solarium  © Sherborne Castle

The actual castle opened to the public this summer and is well worth a visit – the website is here. You are asked not to take photographs inside the castle so all interior images shown here are copyright of Sherborne Castle. The exterior shots are my own.

One of the bedrooms. © Sherborne Castle