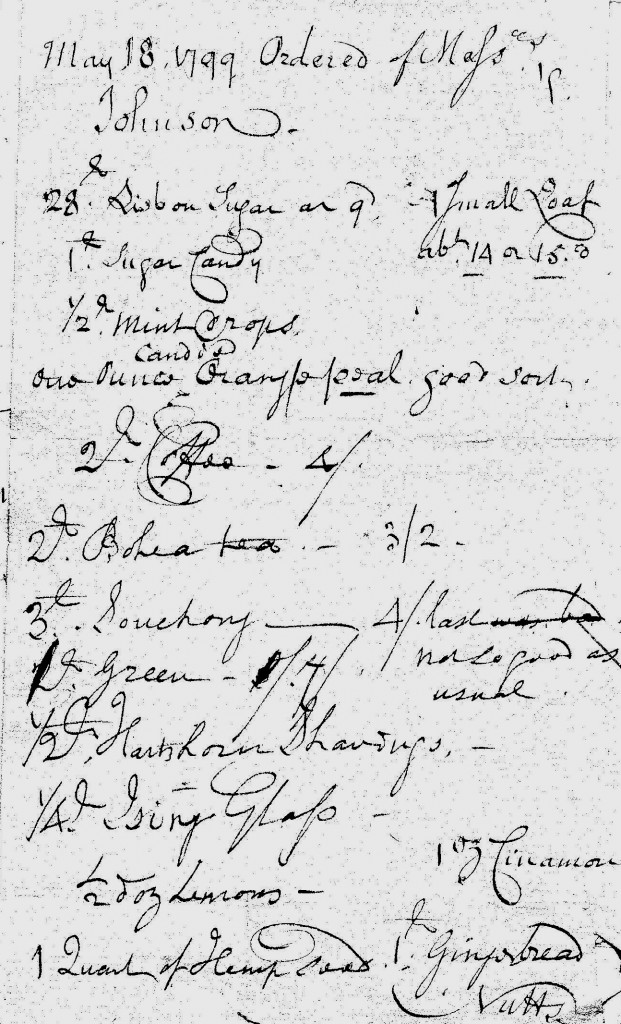 Ordered of Messrs Johnson … your typical shopping list at the local grocery store a couple of centuries ago, if you were reasonably well-off:

28 pounds of Lisbon Sugar (yes, 28 pounds of it, and it probably lasted Richard Hall about a month. Some of it was needed for the currant wine he was busy making…).

1 small loaf (probably a loaf of sugar, rather than bread, because he bought bread from the baker, not the grocer). The Lisbon sugar was soft and off-white in colour and would have been used for cooking. The loaf sugar would have been broken into lumps and served  at the table).

1 pound sugar candy – presumably in case he felt the need for a sugar rush.

Half a pound of mint drops (might have been handy for disguising bad breath, which I am sure he would have had from consuming so much sugar and therefore having rotten teeth!)

3 pounds Souchong (4 shillings, last not so good as usual)

1 pound green tea (4 shillings). Armed with these various teas  Mrs Hall would have been able to be her own blending master, mixing the leaves according to her taste.

Half a pound of Hartshorn Shavings (made from the horns of the male red deer and containing Ammonia. Used in medicine – as sal volatile – as well as  in baking and as a detergent).

A quarter of Isinglass (used  in confectionery and desserts such as fruit jelly and blancmange – and possibly as a flocculent for Richard’s home made wine).

Half a dozen lemons

An ounce of cinnamon

1 quart of hemp seed (I suspect he used then for feeding his canary, although they did have culinary uses!)

Unfortunately I cannot be sure where Messrs Johnson traded from – probably Stow on the Wold, in the English Cotswolds. Richard lived a couple of miles away at Bourton.