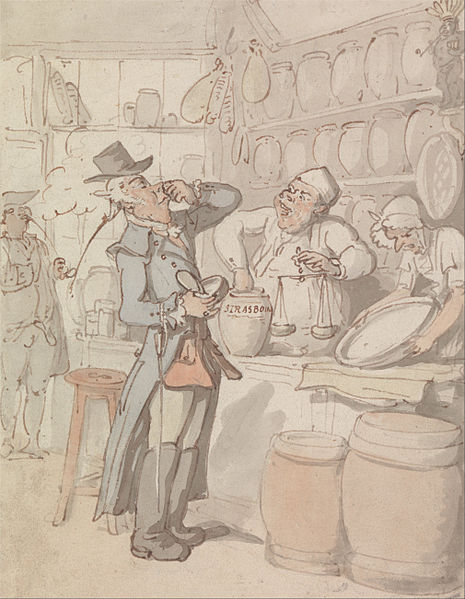 I have just returned to Spain after a fascinating couple of days in York, courtesy of Fairfax House (more of whom in the next day or so). Fairfax House had organized a very successful symposium (a fancy word for a conference….) spread over two days, looking at “the retail realm”.

I hope that my talk managed to be something of a counter-balance to the rather more academic approach of some of the other speakers. I confess that I found that the “gender agenda” got in the way of some of the papers: why not simply accept that 18th century society was extraordinarily unfair and unequal, and that women rarely had the chance to do anything apart from act as breeding stock? Yes, it was an appalling, obscene, waste of talent but it happened, and no amount of research into what women might have been thinking “behind closed doors”, or in literature, can alter the injustice. Indeed the harder some of the papers seemed to emphasize female involvement and importance, the more they seemed to show the exact opposite. It merely reinforced my view that I don’t think that I would enjoy going back to  university to do a course on History in the Eighteenth Century. If one or two of the speakers, who came from both sides of the Atlantic, are anything to go by, I would rather take up wearing a hair shirt by way of penance for being male, or else practice trepanning on myself as a DIY hobby.

So I am not entirely sure what some of the residents of la-la land made of my paper, which looked at the shopping experience from the point of view of the shopkeeper. Some of my ancestor’s customers were women, some were not, but what interested Richard Hall was not their gender, but whether they paid him in good, hard, currency. He worried about clipped coinage, about customers defaulting on their debts, about shop-lifting and damaged stock. He agonized over the risk of fire, worried about whether his customers were small-pox carriers, and dreaded periods of royal mourning because it meant that his brightly coloured fabrics strayed on the roll while he had to endure eight, sometimes twelve, weeks of selling nothing but black satin and black lace. Richard was simply a product of his time, and branding him as a misogynist or a bigot surely misses the point: this was his world. He accepted it, because he knew no other, and while feminists can argue that he kept each of his two wives in the background, as second class citizens, that is not the way he saw it. Nor, I suspect, is it how his wives saw it… 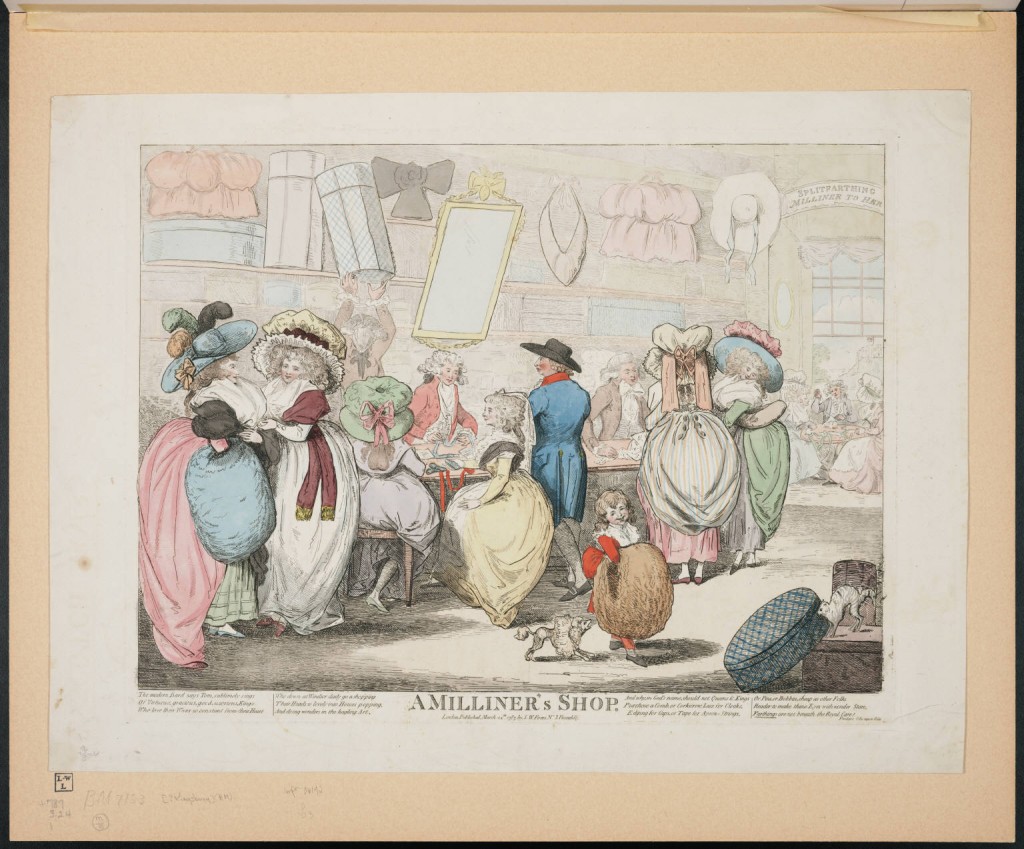 A Milliner’s Shop, courtesy of the Lewis Walpole Library

Certain aspects of the conference were fascinating, not least the evolution of the shop as a physical structure: from market stall to dedicated shop. It was interesting to see how glass changed the display concept; how bow-fronts to the shops developed, how trade descriptions evolved, and how trade cards and bill-heads helped differentiate one supplier from another. There was a  splendid contribution from Vanessa Brett on the Deards family toy-shops in Bath, London and elsewhere, and fascinating accounts from others about tea-smuggling from Gothenburg, about Josiah Wedgwood’s skills  as a salesman, and about how foreigners marvelled at our shops and our shopping habits. I certainly learned a lot, met some lovely people, and thoroughly enjoyed presenting a  paper to people who knew an awful lot more than I do about certain aspects of life two centuries ago. They received me kindly, and for that I am grateful. It was good to be able to produce the diaries and journals of Richard Hall to people who could appreciate and understand them.

The Bum Shop, courtesy of the Lewis Walpole Library 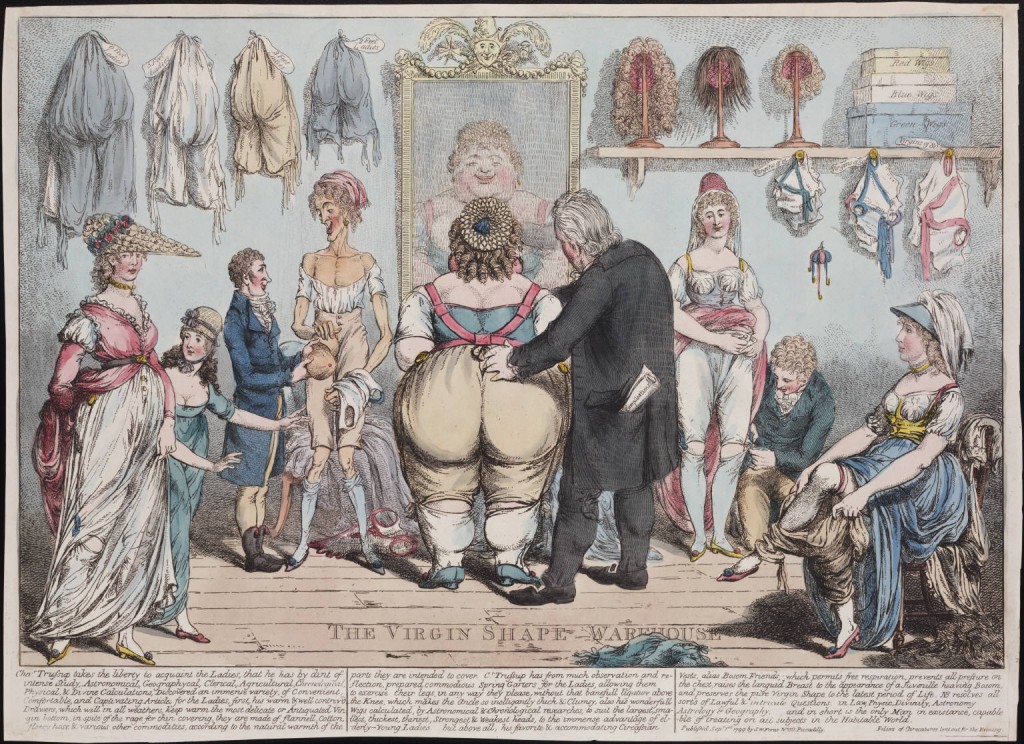 The Virgin Shape Warehouse, courtesy of the Lewis Walpole Library

Diatribe over: what of the shops themselves? Here are a few images to remind you of the eighteenth century shopping experience, both exaggerated and real. I have used the Bumshop and the Virgin Shape Warehouse images before, but they are interesting simply as confirmation that shop assistants (usually male) would be scurrying around, obsequiously reassuring  customers and tempting them to buy. There were mirrors, there were trade counters, and there were facilities for trying on (though not, of course, in full view of other shoppers!).

The image  at the start of this piece is a Rowlandson, showing a gentleman sampling snuff in a tobacconists. Again, it is interesting for its array of storage jars and containers, separated from the customer by the long wooden counter. I had not appreciated that so many Georgian shops were simply ‘carved out’ of residential buildings, meaning that their frontage was often only one half of the building, but stretching back to at least two rooms deep. It meant that for many shoppers, they would enter a room 7 to 10 feet wide, separated in its entire length by a long counter, so that the shoppers would enter in single file on one side, looking across the counter at the goods which would then be presented to them for inspection by the shopkeeper. The Wedgwood-inspired idea of shops where customers could wander round inspecting the goods must have been revolutionary, to say nothing of supplying goods on approval, free delivery, BOGOF and money-back guarantees. Poor Richard must have despaired at such extravagance! Until 1768, shopping was far less of a window-shopping experience, although I rather liked the description by Newcastle University’s  Professor Helen Berry of  ‘women who ramble’ going by the cant name of “silkworms”. 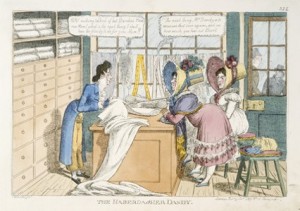 To end with, a couple of the images I used in my talk, showing the interior of a haberdasher’s shop.  This one, dating from 1810 (shortly after Richard died, and therefore highly likely to be representative of his shop at One London Bridge) shows the counter, the innumerable drawers for bits and bobs, the shelves for material, and the  lace and ribbons hanging across the window. 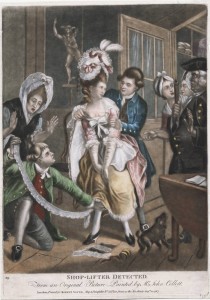 The other shows a young lady apprehended as she tries to leave a haberdasher’s shop when she is stopped because she has been hiding lace and ribbons up under her skirt. The constable is called, and stands at the doorway, as an eager young lad ferrets around to see what else she has pilfered…

I have also added two of Richard’s actual display cards. You can just imagine them sitting discreetly on a pile of velvet and of cotton wadding, ready to catch the eye of the eager shopper…

4 Responses to “Shops and shopping in the eighteenth century…”