For Christmas I bought myself a splendid book, dating back to before I was born (!) called “Sign boards of Old London Shops”, by Sir Ambrose Heal. It gives a delightful picture of the street scenes of the Eighteenth Century, when everyone, but everyone, seemed to have a sign board hanging from the front of their building.

That is readily apparent from one of the illustrations, which shows the wide streets leading to the church of St Mary le Bow in Cheapside. It was printed by Thomas Bowles in 1750. 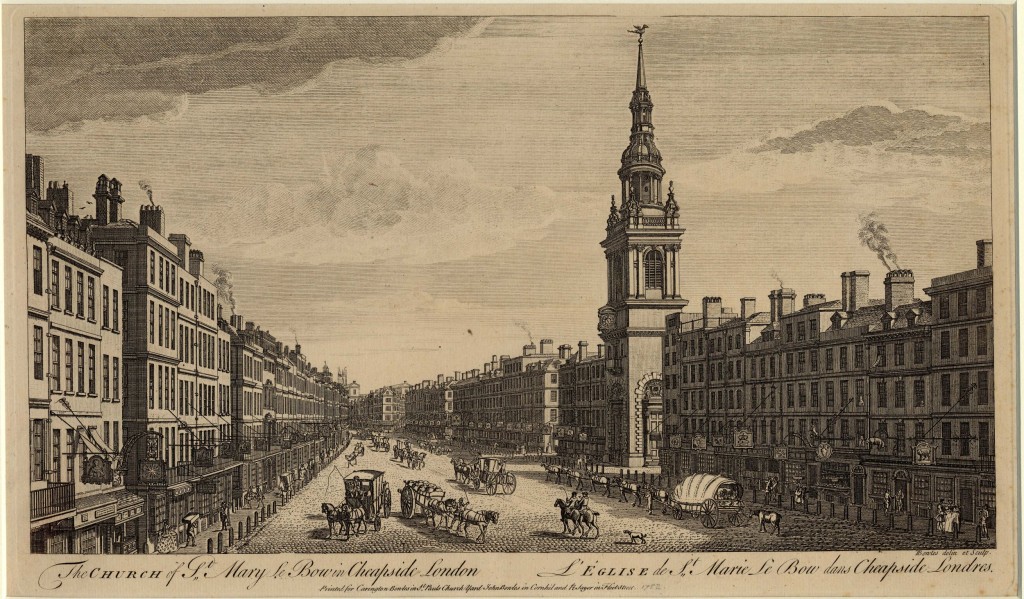 Look carefully at first floor level and you can see hanging signboards for as far as the eye can see, right down both sides of the street.

I was aware, from  the letters which my ancestor Richard Hall received, that addresses were invariably described by reference to such signs (“at the sign of the Blue Angel” or whatever) and that postal addresses did not become commonplace until the early 1770’s. An order made by the Commissioners of Paving for Westminster  in May 1763 under an Act of Parliament of the previous year had decreed that all overhanging projections should be removed – apparently in response to a succession of complaints about passers-by being struck by signs falling down in high winds. I know the feeling – while I was in Bath  in January a  sudden burst of gale-force wind sent a V-board, advertising a local shop, way into the air, crashing down at my feet. It certainly was an alarming sight – and sound – and would have been even more so if the sign had fallen from rusted iron supports, above head height.

A similar decree applied to the City of London, as well as Westminster, and no doubt it was felt that the increasingly literate population could quite easily identify numbers at doorways and that large advertising boards were not really necessary.  Be that as it may, the traders were not keen to lose their hanging adverts, squeaking away, and no doubt after rainfall, dripping all over pedestrians at street level. They were no doubt in time persuaded by recollections of a bad storm earlier in the century at Bride Lane, when a large sign  was pulled from its lofty anchorage, bringing down the façade of the building at the same time. Four people were killed in the collapse. Eventually the signs came down, and postal addresses came into vogue.

In the late 1780’s a German visitor to these shores called J W von Archenholz had written in his book “A picture of England” the following description:

“Among the peculiarities of London may be reckoned the pavements and the lamps. About 20 years since the city was the worst paved in Europe, the evil was indeed felt but the inhabitants did not even know how to remedy it. From almost every house an enormous sign was suspended which darkened the streets,often fell down, and sometimes killed the passengers. Two Acts of Parliament appeared almost at the same time and ended these disadvantages, the signs disappeared and the streets of London were covered with pavement unrivalled in its kind, and which cost 400,000 pounds sterling”.

The excellent tome by Sir Ambrose explains that in the reign of Queen Anne the signs were generally made up of a single image, but that composites became popular. He quotes a squib from the British Apollo from 1710 which reads:

“I am amazed at the Signs

As I pass through the Town

To see the odd mixture:

A Magpie and Crown,

The Whale and the Crow,

The Razor and Hen,

The Axe and the Bottle,

The Tun and the Lute,

The Eagle and child,

The Shovel and Boot”

Nowadays it is hard to remember trades with their own sign – the three gold balls for the pawnbroker is one that comes to mind – but by and large the only businesses which rely on signs nowadays are the pubs. Oddly, they rarely have signs which tell us anything about the business – the odd “Barleycorn” or Maltsters Shovel” but as often as not they are heraldic (the Red Lion) or redolent of times gone by (the Golden Hind) or commemorate royal allegiances ( the King’s Head or the Royal Oak). Newer names are often spurious imitations of old composites (The Slug and Lettuce comes to mind). But what of the ordinary trade signs of the Eighteenth Century, how recognizable would we find them today? Not very!

Here are a few:

Others were of course much more obvious – the Collier and Cart for the Coalman, the Dairy Maid and Churn for the cheese-maker, and the Golden Fan for the Fan Maker. It is interesting how often there were three items in the name, so we had the Three Brushes, the Three Rabbits, Three Keys, Three Tobacco Pipes and so on.  I recognize many of the emblems as being privy marks used on old coinage from the Tudor period (i.e. to show that the silver content had been checked at the previous assay) such as The Woolpack, The Tun, The Rising Sun, The Bell, The Anchor, The Hand etc.  These were all instantly recognizable emblems to the “man in the street”  so there would not be the embarrassment of walking into the sign of the Angel (feather bed man) and asking for Fishing Tackle (the Angel and Trout).   He might however had difficulty with the Dog’s Head in a Pot (ironmonger) or the milliner who traded under the sign of Mary Queen of Scots’ Head…

The one street sign I am not aware of is the splendid one by James Gillray outside a knocking shop – here, an extract from  his caricature called “The Thunderer”. Well, at least you would know what you could expect inside! 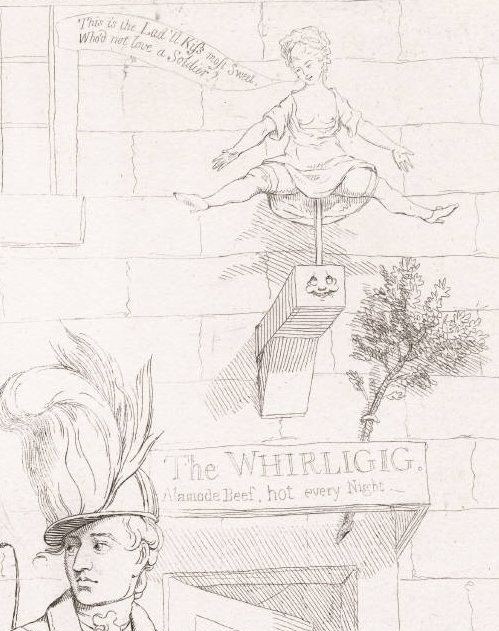 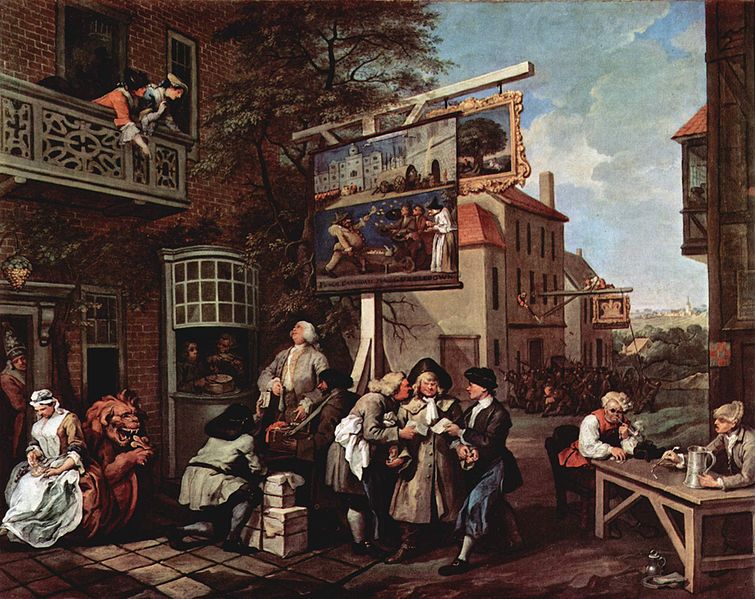 When I feel so inclined, maybe I will scan in a few of the fascinating images taken from Sir Ashton’s book – they certainly give an insight into what the shopping streets would have looked like 250 years ago. Meanwhile, here are three – the Swan and Sun promoting the wares of Barnard Townsend on Ludgate Hill, Haberdasher, between 1743 and 1765; the Black Raven belonging to  John Victory in Cheapside in around 1700 (another haberdasher); and the Hand and Lock of Hair announcing the trade of John Harper in Cock Court, St Martin’s le Grand in 1740. He sold hair – I could do with Mr Harper!