When I were a lad …well, when I was seven and at boarding school, we were all terribly keen on skipping. Unfortunately, one day the rope got caught on a raised paving slab as I was racing along, and sent me soaring head-long (or rather, tooth-long) against the ground. Having buck-teeth meant that I broke both my front teeth, leading to expensive dentistry over many, many years. And that was the last I thought of skipping until now, when I came across various images of skipping in the Georgian Era. It is obviously high time I ran a themed blog on skipping so that I can then safely forget about the topic for another sixty years… 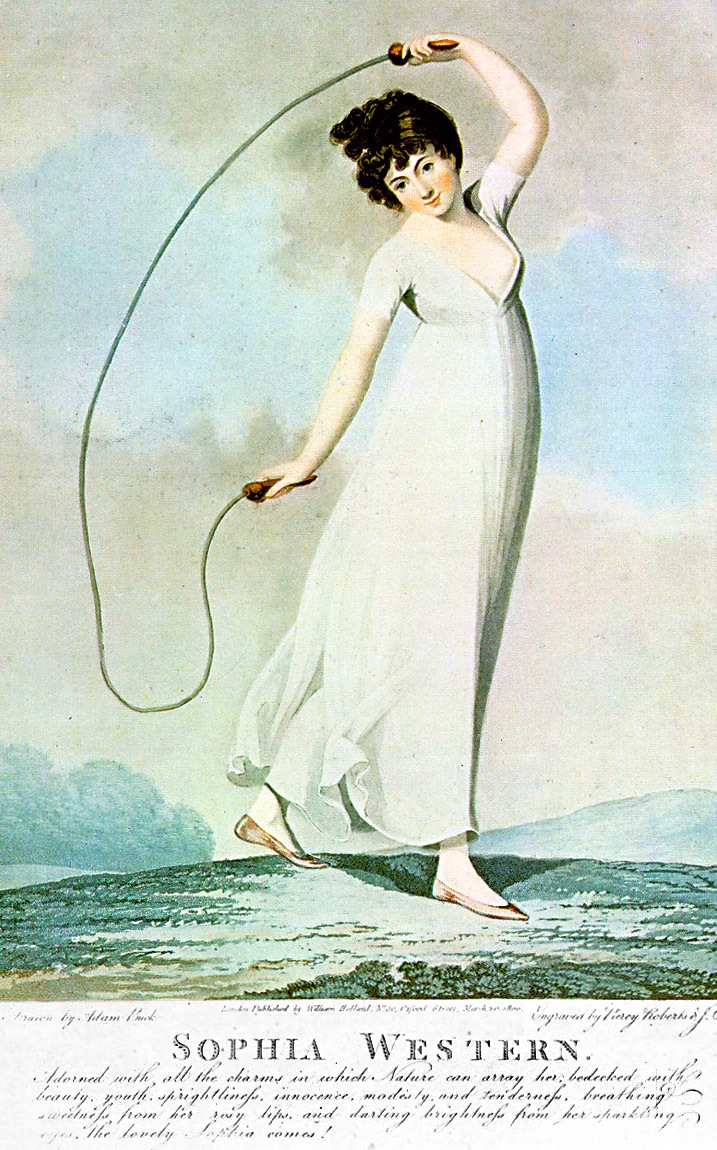 First up, an image of Sophia Western, the wondrously beautiful heroine in ‘Tom Jones – the Foundling’. Up until the 1700’s skipping was mainly a masculine past-time, often associated with sailors who were, of course, used to working with ropes. But by 1800 women joined in – just so long as it wasn’t too energetic and likely to over-excite the poor dears. Or break their front teeth…

Here she is again, by the artist John Hoppner, courtesy of the Government Art Collection. 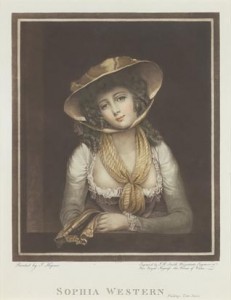 The lovely Sophia is shown skipping in a flimsy Empire Line dress of the early 1800’s, no doubt relishing the freedom of movement made possible by her costume. It is however something of an anachronism, as Fielding wrote the novel Tom Jones fifty years earlier, and the artist should perhaps have shown her in a hooped skirt, or a heavy mantua – but certainly not in a costume which would have permitted skipping.

Because of course, the trouble with skipping was … ankles. You cannot really skip without showing them, and that was a tad scandalous for the Georgians. 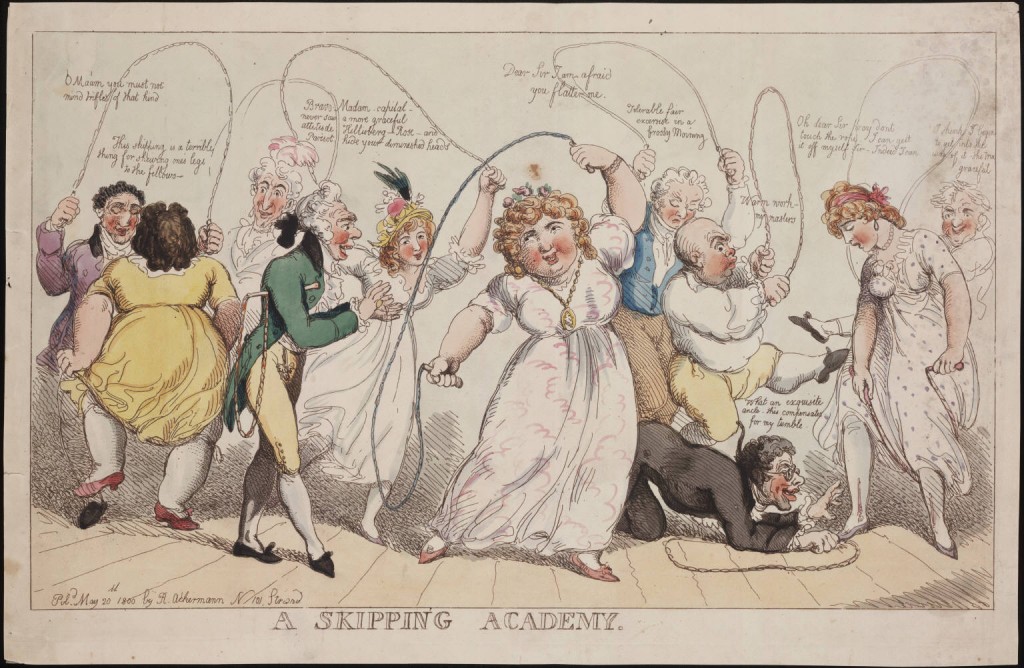 Which leads onto a caricature shown on the Lewis Walpole site entitled “A skipping Academy.”  It is accredited to Thomas Rowlandson, but George Woodward may also have had a hand in it, and it was published by Rudolph Ackermann in 1800. The lady on the left in the yellow dress, with her back to us, is saying “This skipping is a terrible thing for showing one’s legs to the fellows.”  The man swinging the rope for her cannot take his eyes off her dumpy limbs and announces “Oh Ma’am you mustn’t mind trifles of that kind.”

The instructor applauds the efforts of the central female figure with the words “Bravo Madam – capital – never saw a more graceful attitude….” Her Florid Rotundity replies “Dear Sir, I am afraid you flatter me.”

One gentleman comments: “Tolerable fair exercise in a frosty morning” while his servant (?) remarks: “Warm work my Masters.” But I particularly like the figure crawling along the floor, apparently having been tripped up. He gazes intently at the shapely ankle of the gorgeous girl who has stepped on his rope. He exclaims: “What an exquisite ankle. This compensates for my tumble.”  To which her Divine-ness replies “Oh dear Sir, pray don’t touch the rope. I can get it off myself. Indeed I can”, while her own rope rides up between her thighs, showing an interesting amount of leg. Well, for the Georgians…

Right at the side a merry gentleman, perhaps admiring the rear view of the lady, announces: “I think I begin to get into the way of it…the true graceful…” 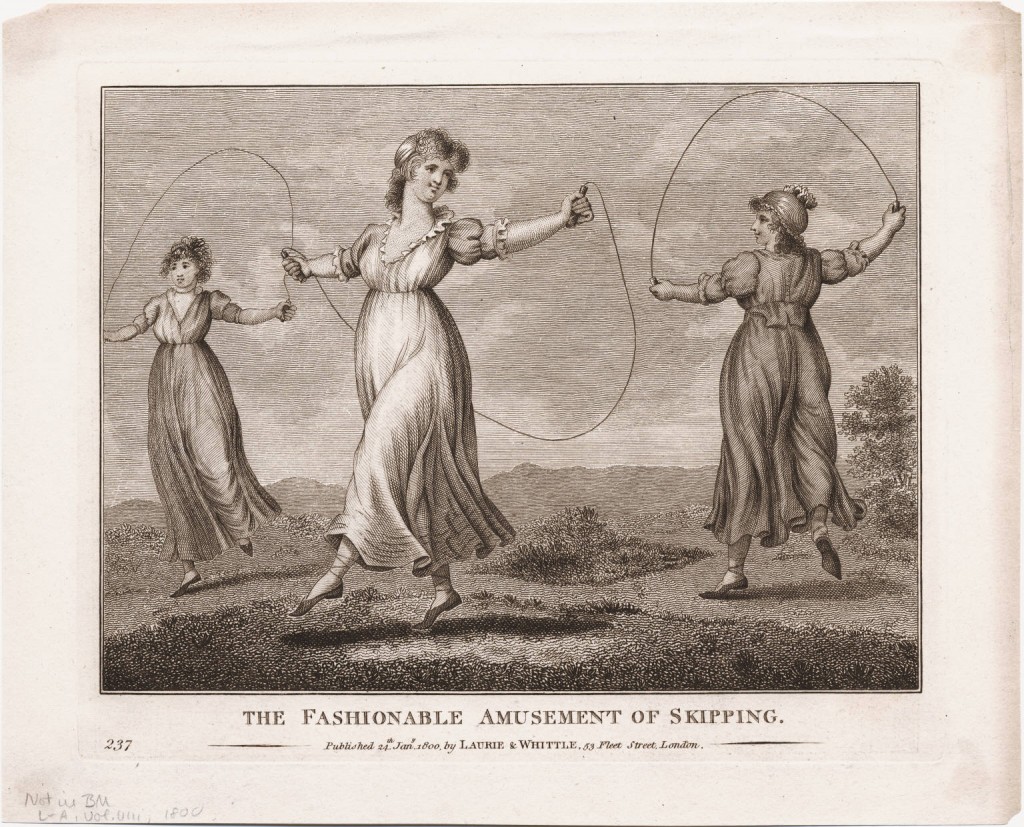 From the same source – and the same year – one entitled  ‘The fashionable amusement of skipping.’ It shows three ladies merrily cavorting on the heath with their skipping  ropes. I have included it simply because the title gives credence to the fact that skipping was fashionable. 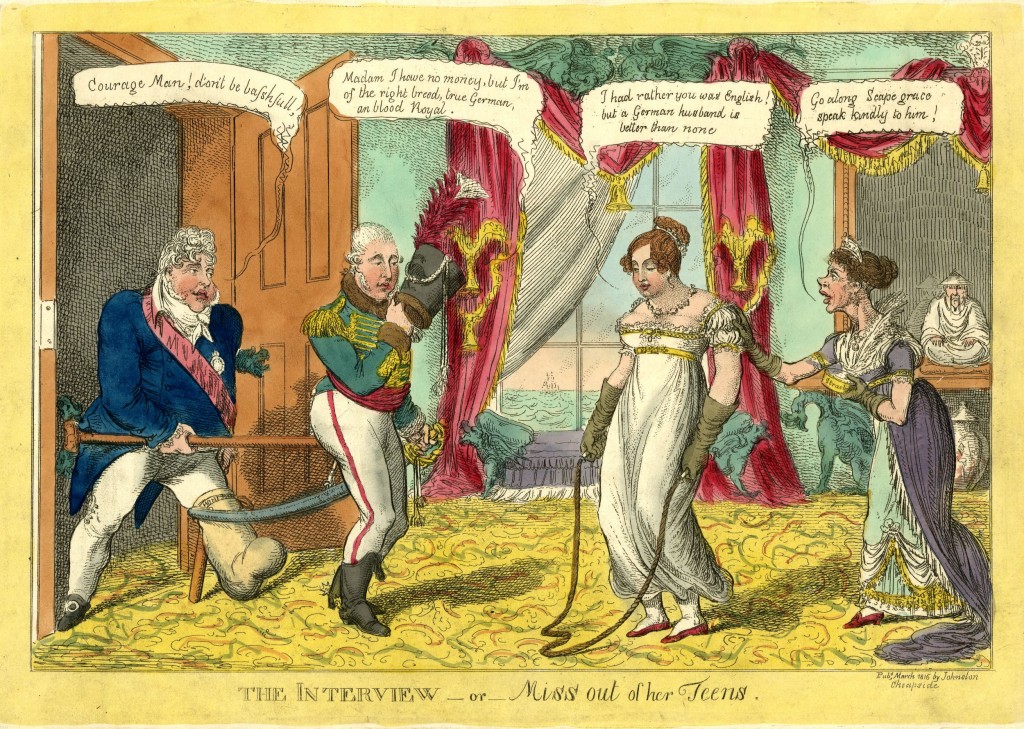 To end with, a political cartoon shown courtesy of the British Museum. It is called ‘The interview- or- Miss out of her teens’. The scene takes place in a reception room at Brighton Pavilion. In the centre, a bashful Princess Charlotte, bedecked in the diaphanous white muslin gown of the period, and wearing gloves, is holding her skipping rope. To her left her ugly mother the Queen (Caroline of Brunswick, hiss boo!) is pushing her forward, anxious for her to be introduced to Prince Leopold. The Prince announces “Madam I have no money, but I’m of the right breed, true German, and blood Royal.”

The Princess answers: “I had rather you was English! but a German husband is better than none.”

To the extreme left is the gouty figure of the Prince Regent. He uses one of his crutches to poke Prince Leopold up the backside and says: “Courage Man! don’t be bashfull!”

The scene is apocryphal – and somewhat inaccurate since it was the young Princess who implored her father to let her marry Leopold. Princess Charlotte was the only legitimate child of the Prince Regent, by the woman he was forced to marry by his father King George III. The Prince Regent loathed his wife, Caroline of Brunswick, and had nothing to do with her from almost the time of the marriage. The Prince barred his wife from having anything to do with bringing up the child, who was regarded as willful and headstrong. She really must have been like a bird in a richly-gilded cage – caught in the cross-fire of her parent’s bitter feuding, an only child, constantly being told who she could and could not associate with…no wonder she was considered a wild child of her times.

In 1814 the eighteen year old Princess was propelled in the direction of marriage with Prince William of Orange. Initially she agreed to an engagement but then broke it off. Maybe she wasn’t ready, a mere teenager, for a politically motivated union. She wanted love, and romance! Besides, her intended was sufficiently ugly  to have earned the moniker ‘The Young Frog’ which was enough to turn off any rebellious young girl…

The Regent was fed-up with his daughter’s wayward behaviour and had her shut away at Cranbourne Lodge in Windsor Great Park. She entered into correspondence with Prince Leopold of Saxe-Coburg and became totally smitten by him. Her father was far from keen –  Prince Leopold had no money and (despite the speech bubble in the caricature) was not really ‘royal’ enough for the Prince Regent. After all, he was only a minor princeling, a career soldier and diplomat. But the Prince Regent finally granted his daughter’s wish, and the couple were married in the Crimson Room at Carlton House on May 2, 1816 in front of some fifty, mostly royal, guests. 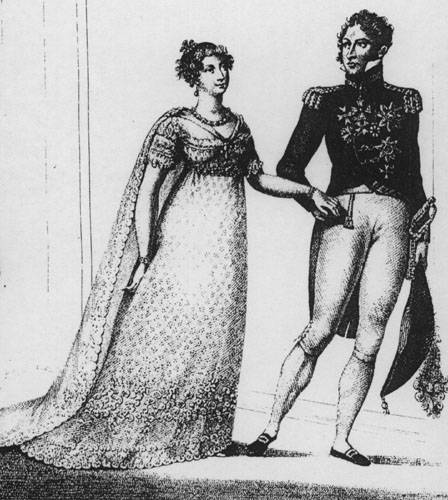 The wedding was extremely well-received by the public – she was ‘The People’s Princess’ of her day. The fashion magazines dutifully reported what her wedding dress was made of  (“silver lamé on net, over a silver tissue slip, embroidered at the bottom with silver lamé in shells and flowers. Body and sleeves to correspond, elegantly trimmed with point Brussels lace. The manteau of silver tissue lined with white satin, with a border of embroidery to answer that on the dress, and fastened in front with a splendid diamond ornament”). Prince Leopold, by now elevated to the rank of Field-marshal of the British Army, looked gorgeous in  “a British General’s embroidered uniform coat, white kerseymere waistcoat and breeches”.

The young couple appeared to have it made – Parliament voted her a dowry of £60,000 and a joint income of £50,000 a year. Leopold was a calming influence on the wayward Princess, and she dutifully became studious, and always mindful of her responsibilities as heir to the throne. But she suffered two miscarriages in the first year of marriage and when she became pregnant again there were understandable fears for her strength. She carried the child full-term but had a ghastly, fifty-hour, labour. The baby was stillborn. Charlotte died of complications a few hours later – of post-partum hemorrhage and shock. She was just 21.

So, the skipping Princess was a tragic figure. To close, here she is in a National Portrait Gallery painting made by George Daw,  in 1817 – the year of her death: 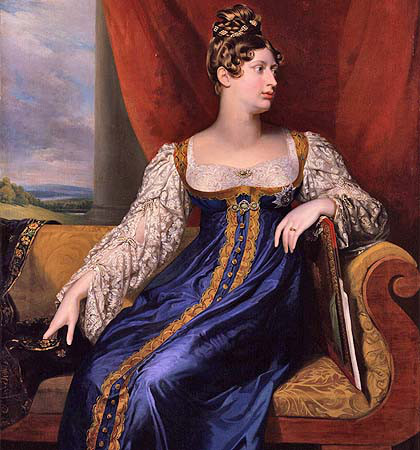 Funny to think that if she had received proper medical care (the doctors declined to use forceps) the baby might have survived and we would never have had Queen Victoria on the throne…oh, the curious  twists and turns of history! And strange to think I came to the Princess rather unexpectedly, via a skipping rope!

4 Responses to “Skipping off to the Eighteenth Century…”