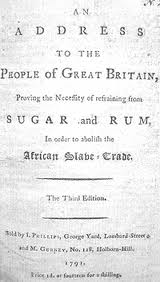 In the 18th Century sugar meant one thing: slavery, or at least it did until 1791 when a campaign was launched to boycott sugar from the West Indies. Parliament was dragging its feet over abolition, having failed to pass a Bill in that year outlawing the slave trade. The response: hundreds and thousands of households up and down the country ‘did their bit’ by giving up sugar altogether, or opting for more expensive sugar from the East Indies, produced by free labour. It was a campaign which motivated not just the electorate – indeed it gave a voice to a huge swathe of people who could not vote, including of course women. They were the ones making the shopping decisions – and whipped up by some very effective marketing, their decision was to” say no” to Caribbean ‘slave sugar’.

The boycott hit the interests of the wealthy merchants who traded in Caribbean sugar where it hurt most – in their pockets.

Up until that time the import of sugar had been astonishing. Take Liverpool for instance, which in 1704 imported just 760 tons of sugar – a century later the imports were a staggering 46,000 tons. Bristol had the same story, competing with Liverpool in the race to export textiles, small arms and gunpowder to Africa; trading goods for slaves to take from Africa to the West Indies; and then trading these for sugar and rum to take back to Britain from the Caribbean.

The campaign against slave sugar was boosted in 1791 when William Fox published an anti-sugar pamphlet. It ran to 25 editions and sold 70,000 copies. One paragraph should suffice to set the tone:

“If we purchase the commodity we participate in the crime. The slave dealer, the slave holder, and the slave driver, are virtually agents of the consumer, and may be considered as employed and hired by him to procure the commodity…In every pound of sugar used we may be considered as consuming two ounces of human flesh” (William Fox, 1791, in Address to the People of Great Britain).

The boycott spread rapidly until by 1794 it is estimated that well over 300,000 families had joined the protest. Grocers reported that demand had fallen by a third. Even the Royal Family claimed to have joined the boycott although Gillray suggests in this cartoon that the reason was not because the King personally opposed slavery (there is no evidence that he did) but because he supported any measure which reduced expenditure in the Royal household! 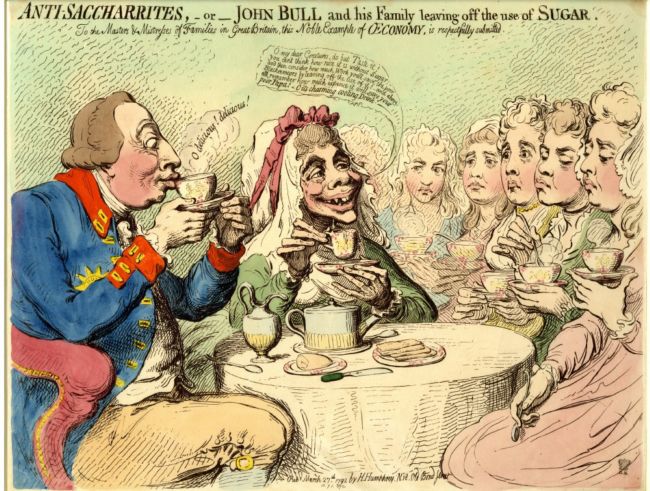 The picture, shown courtesy of the British Museum, contains the usual speach bubbles which are hard to decipher but the Museum helpfully gives the explanation as follows:

“The King, Queen, and six Princesses, three quarter length, are seated round a frugal tea-table. The King, in profile to the right, faces his daughters, holding his cup and saucer to his lips, and saying, with a staring eye, “delicious! delicious”.

The Queen sits in the centre behind the small tea-pot, holding her cup and saucer in bony fingers, and looking with a wide and cunning smile towards the Princesses, saying, “O my dear Creatures, do but Taste it! You can’t think how nice it is without Sugar: – and then consider how much Work you’ll save the poor Blackeemoors by leaving off the use of it! – and above all, remember how much expence it will save your poor Papa! – O its charming cooling Drink!”

The Princess Royal sits at the end of the row, on the extreme right, with four sisters diminishing in age on her right, a sixth just indicated behind the Queen. They hold, but do not drink, cups of tea, with expressions varying from sulky discontent to defiant surprise. Below the title is etched: ‘To the Masters & Mistresses of Families in Great Britain, this Noble Example of Œconomy, is respectfully submitted.’ 27 March 1792 ”

A similar cartoon was drawn by Isaac Cruikshank in the same year: 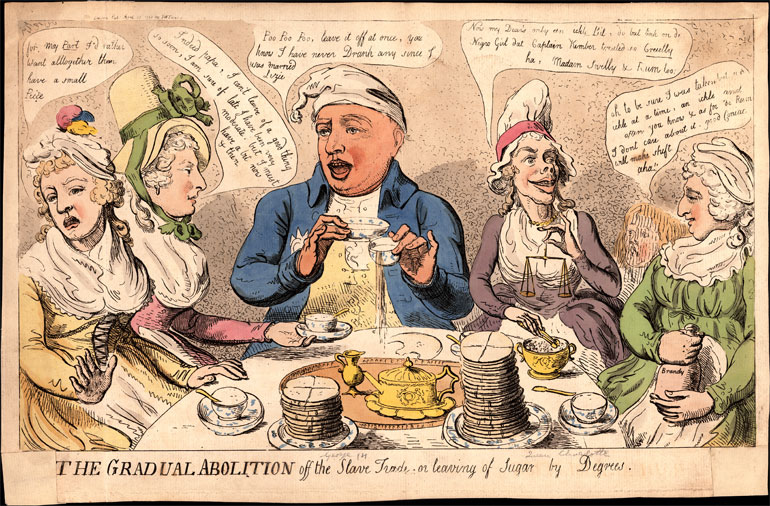 The same Museum’s explanation is a follows:

“The King and Queen sit side by side, facing the spectator, behind a circular breakfast-table; two Princesses are on the King’s right, Mrs. Schwellenburg (the Queen’s Keeper of the Robes, Juliana Elizabeth Schwellenberg) on the Queen’s left, the figures being three-quarter length. and the surface of the table filling the centre foreground,

Princess Elizabeth, in profile to the right, holds out her cup, saying, “Indeed papa, I can’t leave of a good thing so soon, I am sure of late I have been very moderate, but I must have a bit now & then.”  The King, who wears a nightcap and holds a brimming saucer in one hand, a cup whose contents he is spilling in the other, answers, “Poo Poo Poo, leave it off at once, you know I have never Drank any since I was married Lizie.” Her sister, on the extreme left, turns her head away in disgust, saying, “for my Part I’d rather Want alltogether than have a small Peice.” The Queen, much caricatured, wearing a plain cap and morning gown, takes tiny pieces of sugar from a basin to weigh them in a small pair of scales, like those used for weighing guineas which she holds between finger and thumb; she grins delightedly, looking at Mrs. Schwellenberg, and saying, “Now my Dear’s only an ickle Bit, do but tink on de Negro girl dat Captain Kimber treated so cruelly ha, Madam Swelly & Rum too.” Mrs. Schwellenberg (right), grasping a bottle of Brandy in both hands, answers, “oh to be sure I was taken but an ickle at a time, an ickle and often you know & as for de Rum I dont care about it. good Coniac will make shift aha !!” In the shadow between the Queen and her Keeper of Robes is a face gaping at the table, perhaps intended for a younger princess. On the table are a small tea-pot and cream jug on an oval tray, and two piles of muffins.  Dated 15 April 1792.”

For some it became a point of honour to be seen to be buying sugar from an alternative source and therefore sugar from the East Indies was proudly displayed in its own sugar containers, such as these ones. 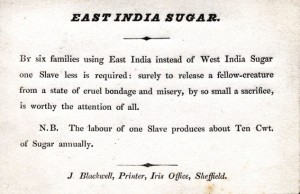 The public read advertisements and they touched a nerve.

The poet, Robert Southey, spoke of tea as “the blood-sweetened beverage,” and Sir William Fox urged the tea drinker to “As he sweetens his tea, let him…say as he truly may, this lump cost the poor slave a groan, and this a bloody stroke with a cartwhip.”

Caricaturists like Gillray and Cruikshank captured the public demand for change – and helped fan the flames. In Parliament Fox had told the gruesome story of a slave, who had been unable to work because of illness, being plunged into a cauldron of sugar cane being boiled up with water, and being held there for 45 minutes by the barbaric sugar trader. In the course of this ghastly ordeal the slave suffered terrible injuries from which he took six months to recover. Gillray portrays this as a scene of cannibalism – eat sugar and you are boiling and eating a slave. Powerful stuff. 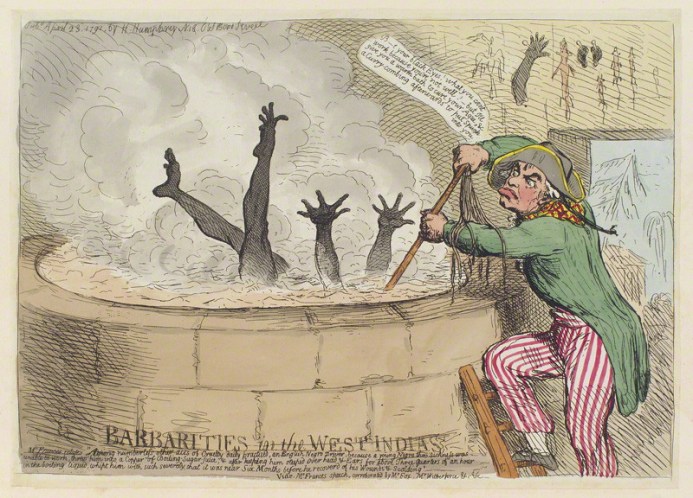 My next post will look at the method of producing sugar – and at the paraphernalia of sugar-related products which gained popularity throughout the 18th Century.