Some like it hot! A second helping of English Mustard

The announcement in the national newspapers yesterday that Colman’s are closing its main mustard-production in Norwich made me think that I would dust off an earlier blog I had written about mustard.  Nowadays Colman’s Mustard is owned by Unilever, and they have decided to close the Norwich factory at the end of 2019, although apparently they wish to preserve something of the connection with the city by continuing to mill mustard seeds, and to package dried mustard, somewhere around Norwich. Anyway, here was the story:

Samuel Pepys, writing on Saturday 25th October 1662 entered the following in his diary:

“Up and to the office, and there with Mr. Coventry sat all the morning, only we two, the rest being absent or sick. Dined at home with my wife upon a good dish of neats’ feet* and mustard, of which I made a good meal.”

*as in Cow Heel Pie

There was of course nothing new about mustard – the Romans probably brought it here, but it was a weedy concoction obtained by grinding leaf and seed alike in a pestle and mortar. Nevertheless it had its admirers, because it helped disguise the smell of rotten meat… It probably got its name from the way the early versions consisted of seeds mixed with the must, the left-over product from fermenting grapes in the wine-making process.

The English  manufacture of mustard had long been centred in Tewkesbury. Then along came Mrs Clements, from Durham. Discarding the pestle-and-mortar approach of crushing everything, she instead treated the mustard to the full works i.e. the same as the way wheat was milled before being turned into flour. It was finely milled, separated from the stems etc and the resulting fine powder contained all the flavour you could possibly wish for.

The story goes that on 10th June 1720 she trotted off to see her neighbours and to flog them a jar or two of her ‘new improved’ mustard. Word spread and before long she headed for London and introduced the new King (George Ist) to the delights of her condiment. Royal admirers were quick to emulate the King’s good taste, and her success was assured. You can still buy a jar of mustard which carries her name from the East India Company (yes, there is still a business trading under that name).

Others followed – particularly  a Mr Keen, who was responsible for the slogan ‘Keen as mustard’ and who set up his business in London in 1742 supplying taverns and chop-houses. And then of course Mr Jeremiah Colman came along and cornered the market with his bright yellow square tins with the bull’s head. He took over the business of Keen and Sons and quickly established his base in Norwich as the centre of ‘all things mustard’. He started his mustard and flour business on the outskirts of the town in 1814, and his commitment to the area included building a school and housing for employees. I think we can take it that today old Jeremiah is turning in his grave at the idea that the business is moving elsewhere.

And to show how quickly ‘Durham Mustard’ became synonymous with ‘hot and fiery’ here is a Cruikshank cartoon from 1798 entitled ‘Durham MUSTARD too Powerful for Italian Capers’. 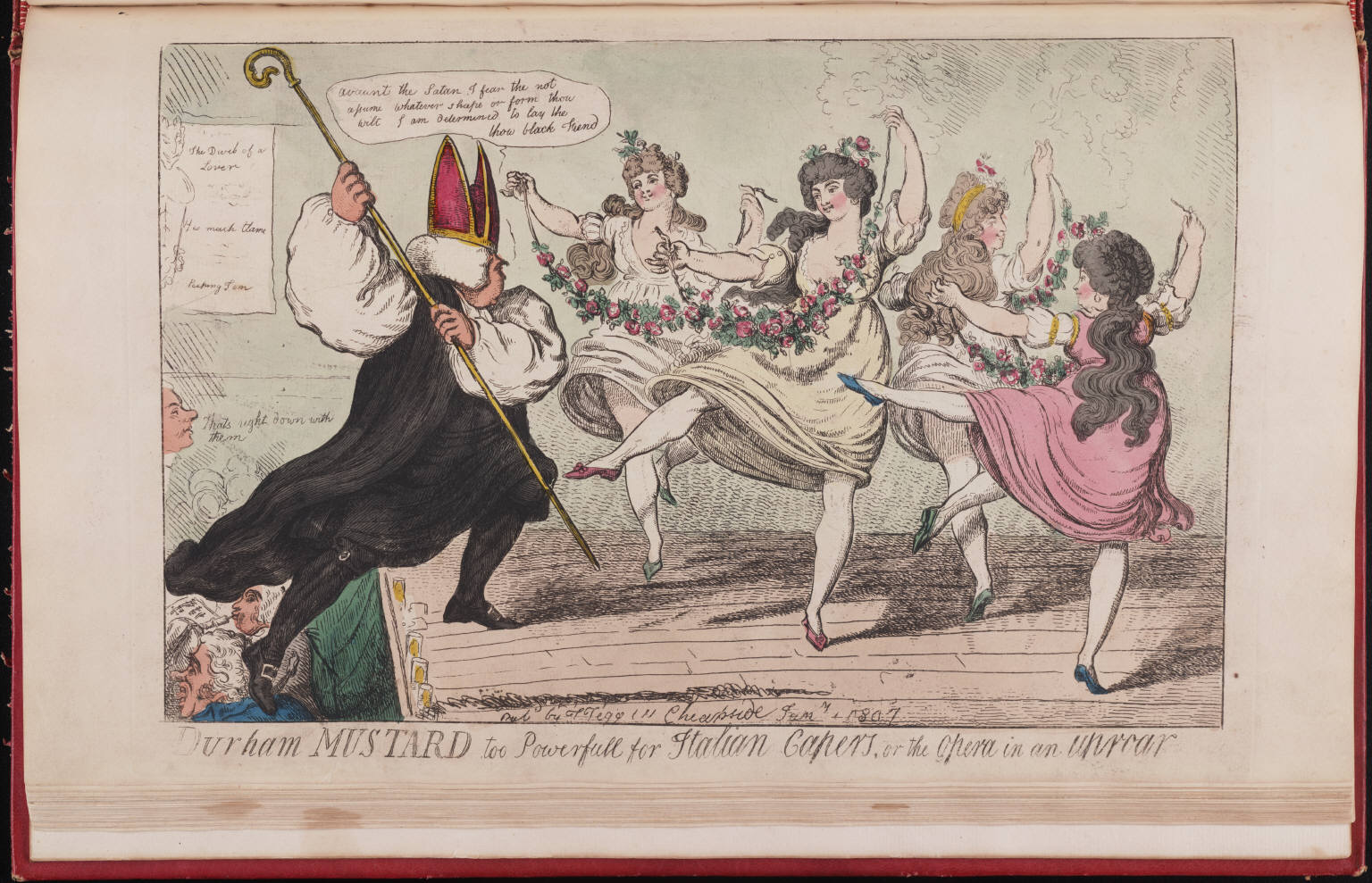 It shows the Bishop of Durham striding on to the stage to protest at the antics of the opera chorus girls. Crossing over the (candle) footlights  and wearing a mitre and holding his crozier as if to strike the pirouetting dancers he shouts:

“Avaunt the Satan, I fear thee not. Assume whatever shape or form thou wilt. I am determined to lay thee, thou black Fiend!”

Against the wall (left) are a carved satyr and a play-bill: ‘The Divil of a Lover – He’s much tlame’ [to blame] and ‘Peeping Tom’ (by O’Keefe, 1784). The first was a musical farce played once only on 17 March 1798, the second was first played on 13 February 1798, so this play-bill gives a good clue of the date of the episcopal outburst.

13 thoughts on “Some like it hot! A second helping of English Mustard”