It is some years since I applied to my Member of Parliament for a ticket to enable me to sit in the Strangers Gallery (now known as the Visitors Gallery) to watch a debate in the House of Commons. I gather that  you can in fact still turn up without a ticket and queue for access, particularly on a Friday, and it is an important part of the democratic process that parliamentary proceedings should be accessible – even if they are somewhat “staged for public consumption”.

What surprises me is how in the eighteenth century this freedom of access was sometimes looked upon as an impediment to the business of the House. But in general, strangers, that is to say people who were neither Members of Parliament nor staff employed by the Palace of Westminster, were allowed in to a viewing gallery where they could watch proceedings, and indeed to mingle in the lobby  before a debate to try and talk to their MP.

At some points in time even women (!) were allowed in and it was fashionable for ladies to turn up  at the House in their finery, and cheer their husbands/lovers/party supporters. Lady Mary Coke was one such visitor – her journals listing eight different occasions when she visited in 1768 alone.

Things got a bit heated when we started to have problems with those colonial bods in America. Debates kept getting interrupted and on 2nd February 1778 it was found necessary to eject a loud party of male onlookers – on the grounds that they were not entitled to listen to “secrets”. Worse was to follow: when Lord North was addressing the House, a party of ladies which included his wife, were deemed to be upsetting the proceedings and were forcibly ejected. A minor riot ensued as the sixty-odd visitors declined to leave of their own volition, and it took two hours to restore order.

For a while women were banned altogether, but by 1782 it was thought to be a sensible idea to create a separate area, up in the roof void, where a small number of ladies (or a larger number of small ladies …) would be permitted access. No-one thought it mattered that they were kept behind a grille, or that there was no ventilation – at least they had a place where they could watch. Quietly, and out of sight. 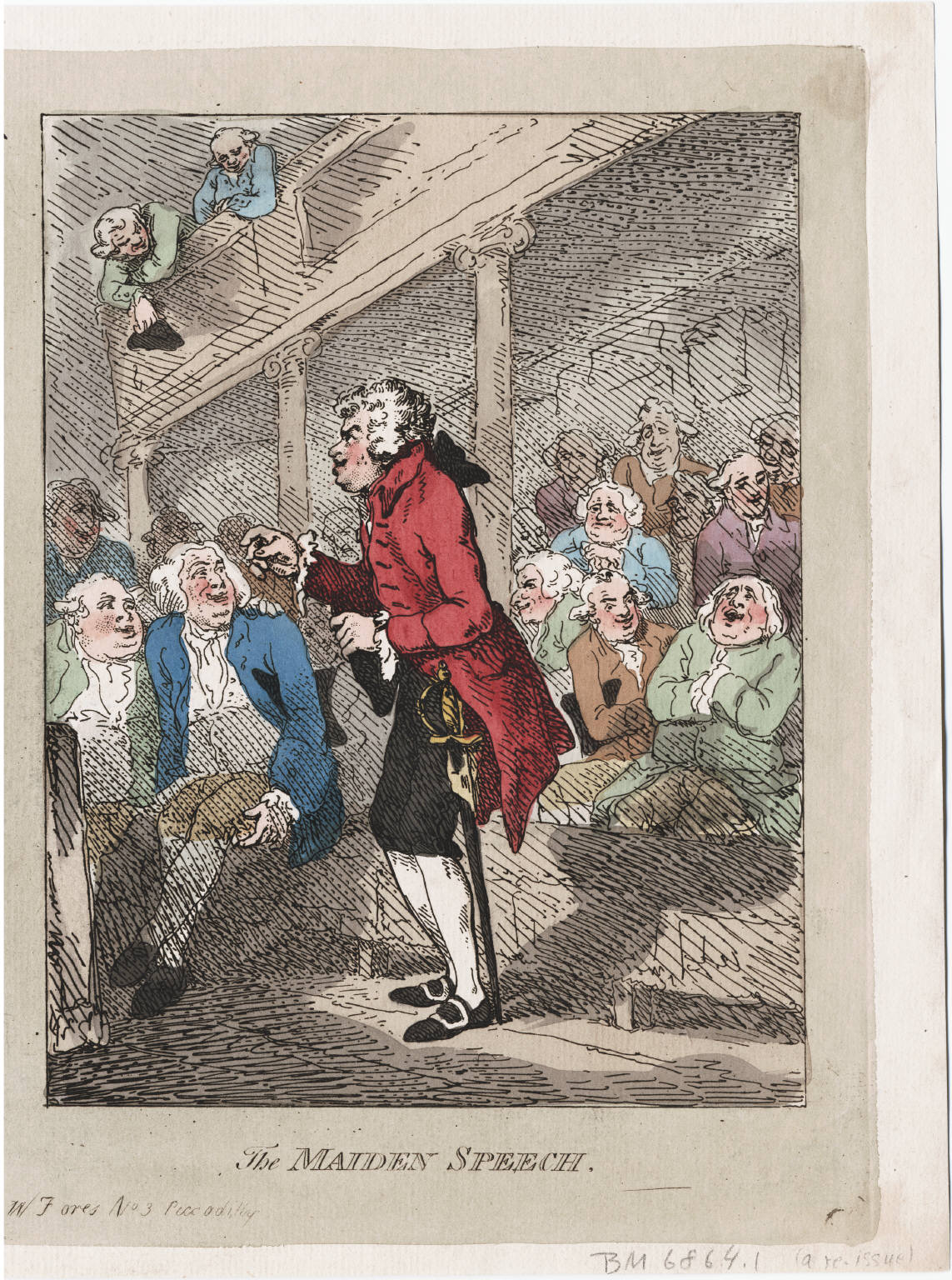 Eight women at any one time could be admitted to this curious  “Ladies Cage” and even then, they had to apply for a ticket in advance. Men on the other hand needed no such prior arrangement or ticket if they wanted to attend…. 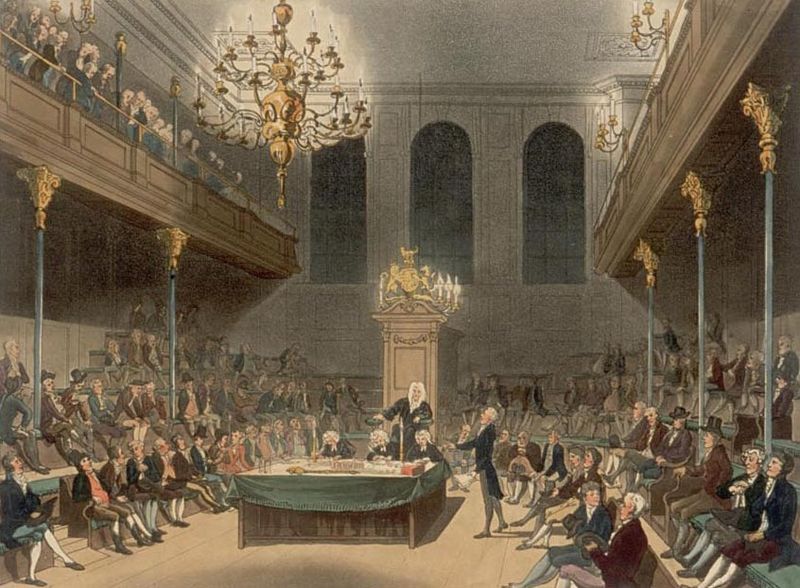 The House of Commons in the early years of the 19th Century, from Ackermann’s Microcosm of London ( a Pugin-Rowlandson collaboration).

Many MP’s clearly felt that allowing women into the House as observers was unseemly, unnecessary and anyway, where else could men go to where they could escape female scrutiny?  Women would destroy the ‘grave and sober temper’  of Parliament and besides, they would hear things which would ‘not at all times be agreeable to their feelings’. But if they had to be allowed, then at least keep them in a hot, airless, cage and make it as unpleasant as possible.

Thus it was that in 1832, when Elizabeth Fry asked to be permitted to observe a debate about prison discipline, she was escorted to a ventilation space above the ceiling of the chamber where she could watch what was going on behind a grating.

When the Palace of Westminster was burned down in 1834 temporary arrangements were made while the Houses of Parliament were rebuilt. In 1836 a small gallery for ladies was constructed at a cost of £400. Twenty-one ladies could sit and watch at any one time, and a few years later it was proposed that the partition should be moved so that double the number of visitors could be permitted entry. It was still described as being like the Black Hole of Calcutta and when the House discussed improvements to the Ladies section of the Strangers Gallery, the Earl of Lincoln apparently objected, saying that the whole idea was only put forward as a joke, not to be taken seriously. Ventilation was not added to the Ladies Cage until the 1860s, with Members of the House noting that the accommodation bore a strange resemblance to an Ottoman harem, with caged women peering through the bars at the duly elected representatives.

The mace used in the House of Commons

I get the impression that the House is still designed as a men-only enclave, with rules, and more particularly traditions, designed and perpetuated by men. When the Honourable Members get around to deciding what to do with the crumbling, asbestos-ridden, building in which  they currently sit I wonder whether they will also sweep away some of the other anachronisms which in my view makes ‘the Mother of Parliaments’ look like a Victorian Music Hall venue, with Prime Ministers Question Time resembling little more than an excuse for overgrown public-school boys to behave badly. It is a tribal ritual, and why anyone, male or female, would want to watch it from the public gallery, or to think that it has anything to do with accountability for the way in which this country is run, is beyond me. Here endeth the rant….

One Response to “Strangers in the House (of Commons, that is).”