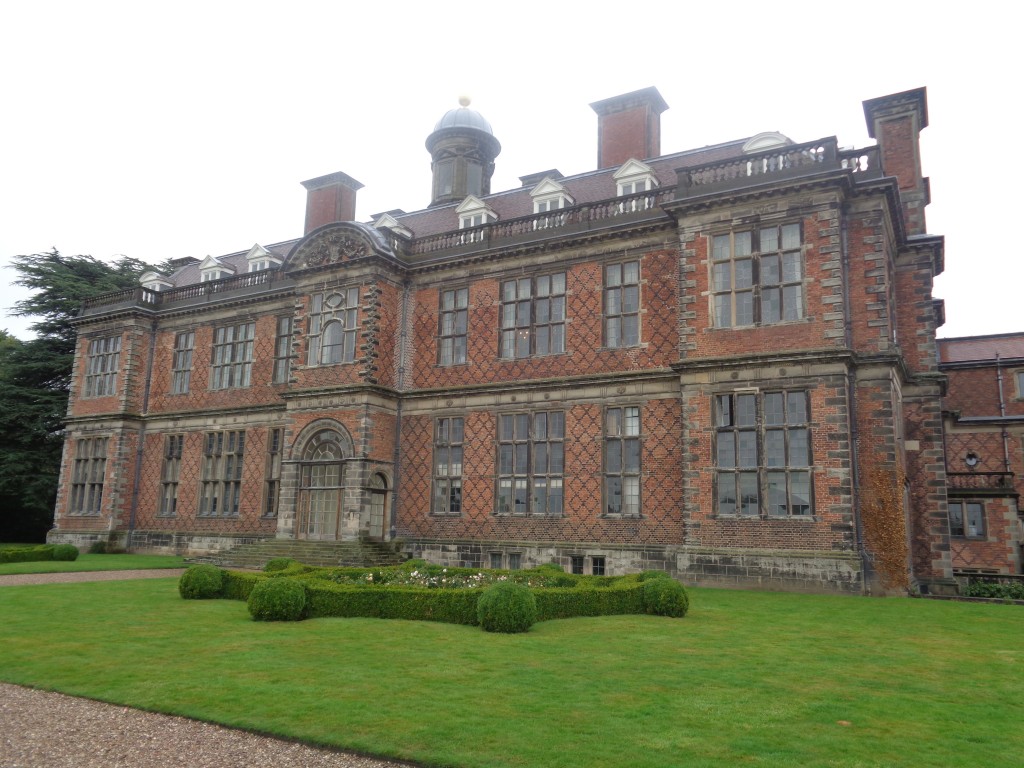 In my recent blog on Croome Park I mentioned the talks I will be giving on board the Boudicca as she sails serenely (I hope!) towards the Cape Verde Islands in November. One of the other talks I have prepared has a Jane Austen link (“Pride and Prejudice – from printed age to silver screen”) looking at the phenomenal success of the book and its various TV and film adaptations. It is a chance to show the various locations used in the numerous adaptations.

So, I was particularly pleased when a recent visit to stay with friends in Nottingham enabled us to go round the splendid Restoration home of the Vernon family at Sudbury Hall in Derbyshire – because that was where the interior scenes of “Pemberley” were filmed in the 1995 BBC TV adaptation.  The house is suitably magnificent – even in the pouring rain when I visited, and features a superb Great Staircase, and a most impressive Long Gallery. Here you can see portraits of some of the mistresses of Charles II – but not the specially commissioned portrait of Colin Firth displayed in the TV adaptation. That apparently was given to Colin when filming ended, and he passed it to his mother who promptly sold it to raise money for charity. 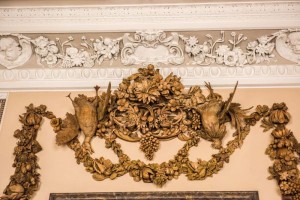 The house displays a mixture of architectural styles with incredible carvings by Grinling Gibbons and Edward Pearce, murals by Louis Laguerre and some splendid and elaborate plasterwork. I gather that the house was designed by the owner in 1660 – acting as his own architect – which perhaps accounts for its slightly idiosyncratic features. Too much was never enough… 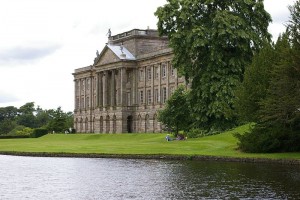 Everyone remembers that Lyme Park near Stockport was Pemberley – but that was only used for the exterior scenes. The intention had apparently been to film the interiors there also – but a change in management (it is a National Trust property) meant a last minute change of plans. Apparently Sudbury Hall (also National Trust) were willing to be used as a late substitute and filming of the interiors took place in July 1994. Given that the BBC version is by far and away my favourite of the various screen versions of Pride and Prejudice, I found it interesting to see which shots were filmed in which rooms, and how the production team had to ‘dress’ the rooms e.g. with curtains, or install furniture or generally move things around. 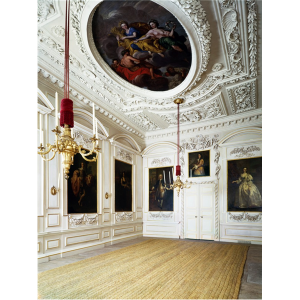 The saloon as a film set

And no, neither Sudbury Hall nor Lyme Park were used for the famous wet-shirted Colin Firth scenes – they were filmed in a water tank in Twickenham, in part using a stunt double for Our Hero so that he didn’t catch Weil’s Disease!

Sudbury Hall has helpful printed guides, room by room, explaining the exhibits as well as a separate guide specifically showing the rooms featured in the TV adaptation. All in all, an interesting property – not Georgian, it has to be said, but a fine country house with Georgian connections! I gather that it also houses the National Trust Museum of Childhood but in my enthusiasm to get to the Tea Rooms I am afraid to say that I gave the museum, situated in the servants wing, a miss!

More about the property can be found on the National Trust website here. Needless to say the film stills are shown courtesy of the BBC. 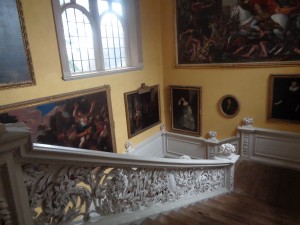 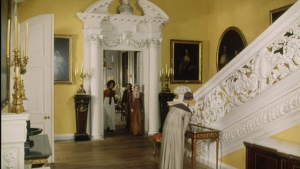 The foot of the staircase, as filmed by the BBC

… and the Long Gallery in use as a film set 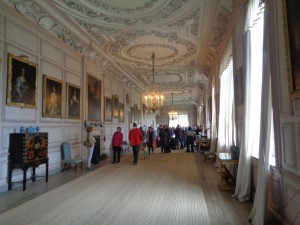 The Long Gallery when I visited it …

2 Responses to “Sudbury Hall – a Restoration masterpiece and a shoo-in for Pemberley.”