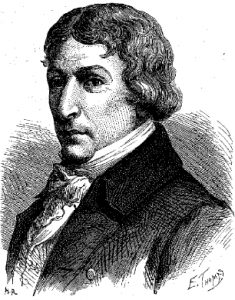 It is strange how some people can influence the world and yet pass directly into obscurity. None more so than a Swiss scientist called Ami Argand who was born in 1750. He revolutionised the distillery process – something dear to my heart – before turning his attentions to the problems of the inadequacy of candle-light. His solution was an oil lamp, which became the staple source of lighting  the households of Europe, right up until the 1850’s with the development of the kerosene lamp.

Good man! But he used whale oil, which led to the wholesale destruction of those Leviathans of the deep. Bad man! The light was between five and ten times brighter than candle-power, and his invention was more a series of improvements as he tackled problems with the wick, the oil feed, the  type of glass and so on. The end result – the Argand Lamp – lit up the Industrial Revolution like a beacon – yet all it gave Argand was litigation over patents! He died in 1803. 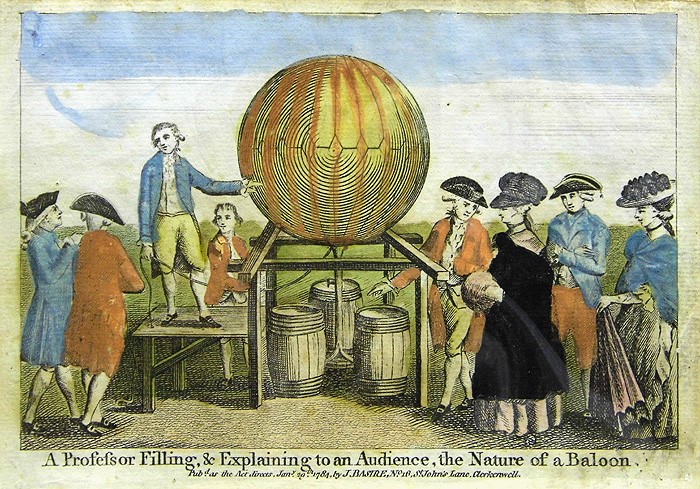 But my interest in him is connected to ballooning. In 1783 he met the Montgolfier Brothers, and they were struggling with the problems of getting hot air into the envelope of delicate fabric. Too large an aperture and the heated air would escape. They modified the chimney used by Argand for his lamp, enabling them to funnel the air into the balloon. In his article “Let there be light” Martin Saltzman of Providence College says that the fuel was “a three-to-one mixture of olive oil and grain alcohol impregnating a circular wick of spun cotton. The principle was that of convection draft, air for combustion being carried up through the centre of the wick by an iron tube that acted as a blower.”

Argand was more interested in promoting his lamp – he travelled to England and was introduced to His Maj. at Windsor. Which is why we know that this very week 240 years ago, George III was being entertained in the gardens at Windsor by this enterprising Swiss gentleman. Argand played on the fact that what the King really wanted to see was the balloon – the English were more than a trifle miffed to hear that those darned Frenchies had stolen a march on them with the first balloon ascent  and wanted to make sure we too could take to the skies and fly like a bird. So, first he showed the balloon, then he demonstrated the lamp. 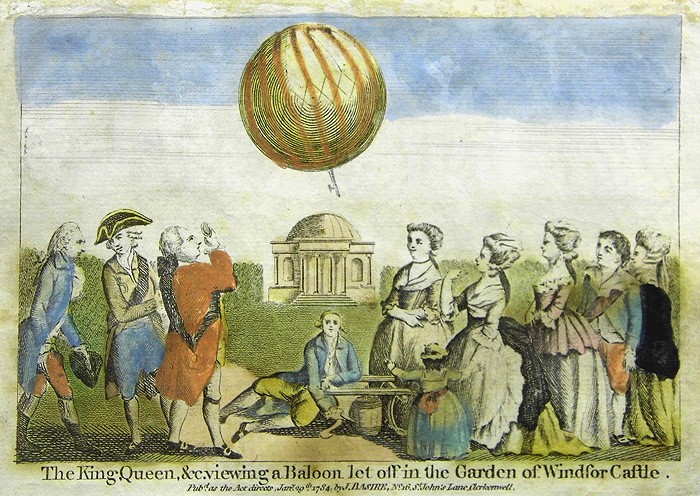 Posterity does not record the light being exhibited, but fortunately it does record the balloon demo. Visit the site of Sanders of Oxford and you can see this lovely pair  of  prints, taken from copper engravings. They were drawn by James Basire – one of four generations of  “James Basires” who were all engravers  and illustrators in the Georgian era. This one had the misfortune to have William Blake as his apprentice, which cannot have been much fun, but that is another story!

The Sanders site shows that they had them on offer at £250 per print – and certainly they appear in beautiful condition, albeit without their original frames. If you want the whole caboodle look no farther than my new friends at Fisher London who have the pair, framed as original, for a fraction of the price. And my thanks are due to Hilary at Fisher London for introducing me both to Argand and to these prints – excellent!

And what happened to Argand? He rushed off back to the Montgolfier Brothers with news that the English were mightily envious, and then settled down to finish developing his own invention. It was granted a British patent under Patent number 1425 entitled “Lamp, Argand’s Specification.” This was published on July 3, 1784. In his patent Argand states  “…that I had, after much trouble and considerable expense, found out and invented A LAMP THAT IS SO CONSTRUCTED TO PRODUCE NEITHER SMOKE NOR SMELL, AND TO GIVE CONSIDERABLY MORE LIGHT THAN ANY LAMP HITHERTO KNOWN.” 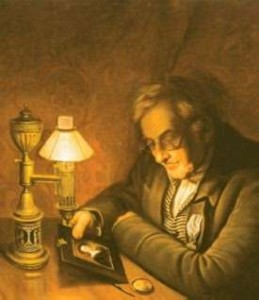 James Peale painted by his brother Charles Willson Peale in 1826. The oil lamp is an Argand lamp.

He entered into a partnership with Matthew Boulton  to produce his lamp, having been introduced by Boulton to other members of the Lunar Society in Birmingham. He found their company most stimulating,  but was forced to return to the Continent to defend his ownership of the invention. Martin Saltzman in his article explains: “The time Argand spent in England was the high point of his life. Called back to Paris in 1786 to deal with the numerous cases involving the  piracy of his lamp and the claims as to whether he was the inventor of the lamp, Argand suffered both a physical and financial breakdown. Even though he was able to establish a factory at Versoix near Geneva, the French Revolution was the final blow to Argand as he lost most of his assets.”

So, not content with forgetting that he probably demonstrated the first ascent of a hot air balloon in this country – albeit tethered and unmanned – we give him no credit for lighting our world. All that and he perfected a way of turning wine into brandy – what more could he have done to ensure fame throughout posterity?

And, finally, (because no post is complete without an 18th Century caricature) a print courtesy of those lovely people at the Lewis Walpole Library site: “Rural Sports. Balloon Hunting” by G M Woodward. It shows a man at the top of a tower taking a pot-shot at the balloon passing overhead, while a startled horse rears up and deposits the three corpulent ladies on the ground. Rare sport indeed! 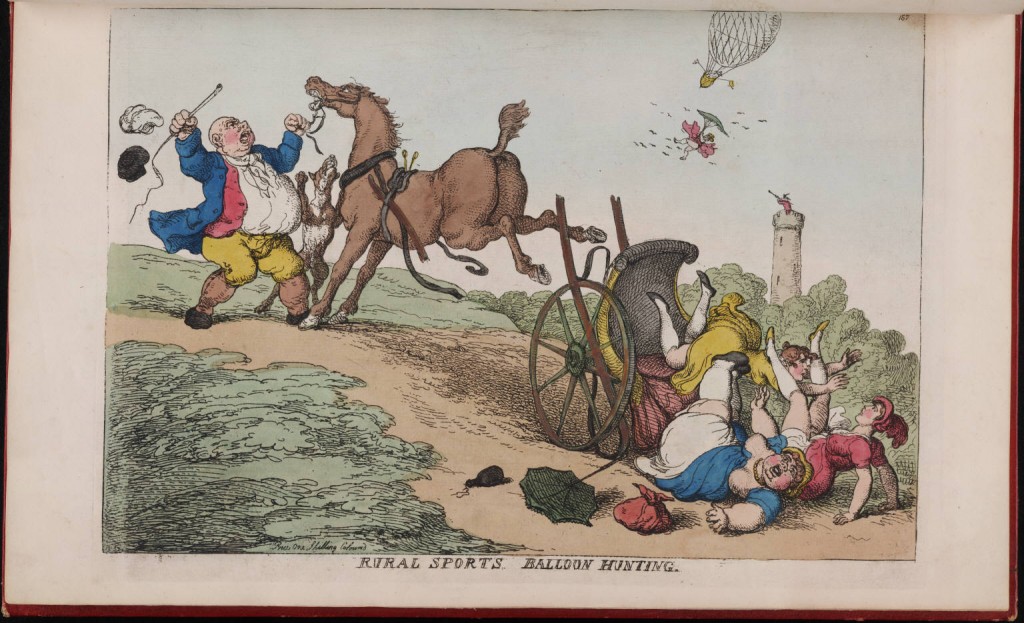