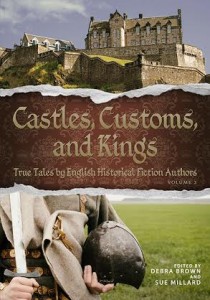 30 September marks the launch of Volume II of a book called Castles, Customs, and Kings: True Tales by English Historical Fiction Authors. It promises to be an extraordinarily eclectic mix  of stories, and there is going to be something in there for you whether your interest is in Saxon princes, or life in the Middle Ages,  or what it was like to be living in the Georgian era. The stories reflect the huge and varied research carried out by the fifty or so authors, and I am proud that a few of my stories are to be included.

Anyway, linked to the launch I thought I would do a post on customs. Given the time of year, it seemed appropriate for the custom to be linked to the end of September, and that means …. harvest suppers. In my recent blog on 26 September I mentioned that my ancestor William Snooke listed in his diary that he had attended a harvest supper. I can recall going to  these suppers when I was  a child, but I had always assumed that they were linked to the Church.  It turns out that this is a comparatively recent association – around 1843 – when the vicar in a Cornish parish church established a Thanksgiving Service and encouraged parishioners to turn up with  farm and garden produce to decorate the church. That would then be eaten afterwards.

When I was living in a farming community on the Somerset levels I can remember  that Harvest Suppers were highly organized events, attended by just about the entire village, usually held in a big tent or marquee. Cue much drinking of Somerset Cider and general merriment… It was an opportunity for the community to come together and celebrate, and it was only when I acquired a son-in-law who is a farmer that I began to appreciate what a landmark the end of the harvest actually is. For the entire year there is not one penny coming in to the farmer’s coffers (well, apart from the odd grant from Brussels…) while the farmer is labouring away ploughing, spreading manure, planting, spraying and doing whatever else that farmers do. And then, after a crescendo of work concentrated into the short period of August and early September, the harvest comes in and whoopeeee they can then try and flog a mountain of seeds. Small wonder that there is a collective sigh of relief at a chance to sit down with friends and neighbours and compare stories of how their yields are bigger than anyone else’s, or how they judged the weather forecast more accurately than their neighbour did.

These harvest suppers were behind the tradition taken to the New World with the Pilgrim Fathers, who gave a thanksgiving supper in 1621 when the first harvest was successfully brought in. I assume that harvesting is a bit later along the East coast of America, hence the tradition of a November Thanksgiving Day. In Britain we don’t have a set date for the Harvest Supper, but it is generally held close to the Harvest Moon, which is the name given to the first full moon after the Autumn Equinox. A harvest moon was always popular with farmers, because it starts to rise in the East just as the sun is setting in the West. There was no period of total darkness, meaning that work could go on late into the evening. This year the Harvest Moon was visible on the nights of 27/28 September, and for anyone interested in super-moons, or why they appear orange through the thicker atmosphere of the earth’s horizon as the moon rises, see an article on the Earth-Sky site here.

From the “It was a work of Craft” website

There were always interesting traditions linked to the end of the harvest, none more so than the view that it was bad luck to cut the final piece of corn. In some areas the harvesters would do the last bit, called the neck or mell, blindfolded. In other places the farm workers would hurl the scythe or sickle at the last few blades of wheat left standing, so that they were not in contact with the harbinger of ill-fortune at the time the last piece fell. In other areas of the country the gleaners would take home the last few pieces of corn, and then bend and fold them into corn dollies. These would hold the last few grains and, come the Spring, those grains would be the first to be sown. In other words: last out, first back in. There are some lovely examples of corn dollies and the like, here. Different areas of the country had different designs, from bells to crosses and dresses, but all had their roots in pagan idolatry.

So much for customs: for more on Castles Customs and Kings it is available on Amazon.com and at Amazon.co.uk

The website for the regular blogs by the English Historical Fiction Authors can be found here.

(And the title “Shine on, Harvest Moon? It was written by vaudeville husband-and-wife team Nora Bayes and Jack Norworth, and was debuted by the  Ziegfeld Follies in 1908. In the ’30s it was the title of a western film, and in 1944 a biographical film about the lives of Bayes and Norworth used  it as the film’s  title.)

PS:  Link here to the other English Historical Fiction Authors blogs on “Customs”