June 5th  sees the British premiere of a film which was released some months ago in the States about a woman of mixed race called Dido Elizabeth Belle. The film is based on a true story – Dido existed, and was the illegitimate daughter of a Royal Navy officer called Admiral Sir John Lindsay.   She was born in 1761 and died in 1804. 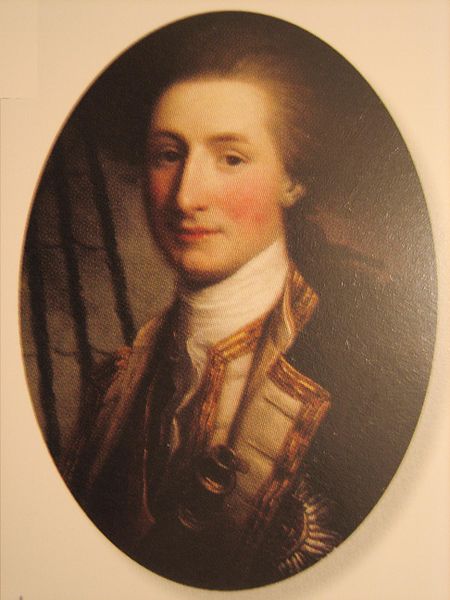 A word about Sir John: he was a fine naval commander who rose to prominence during the Seven Years War. In the successful capture of Havana in 1762 he took command of HMS Cambridge when her commander was killed by sniper fire – and then proceeded to show great courage and leadership. When he returned to Britain he was knighted. He spent further time in both the East and West Indies before returning to marry Mary Milner in 1768. They had no children. Sir John became an MP – and for a short while was in command of HMS Victory when she was first launched, standing down in favour of  Admiral Keppel when the latter announced that he wanted the Victory as his flagship.

He had obviously met Dido’s mother, believed to be a slave girl called Maria Belle,  before he came to fame – Dido was one of three illegitimate children he fathered in his lifetime. When Dido was born she was sent back to England to be brought up by the family of his mother’s sister (married to Lord Mansfield) at the Mansfield home at Kenwood House, in Hampstead, London. Lord Mansfield and his wife were childless and were already bringing up her cousin Lady Elizabeth Murray.

Inevitably much of the film is conjecture – what little is known about Belle is that she lived as a young girl at Kenwood House with Lady Elizabeth,  who was born in 1760 and went on to live until 1825.  The two cousins were therefore much the same age, and became inseparable.  Their young lives would have been extremely comfortable and privileged. That much is clear from a portrait, originally credited to Zoffany, showing her and her cousin and painted in around 1778 when Dido would have been 17. The original is in Scone Palace, Perthshire, Scotland. 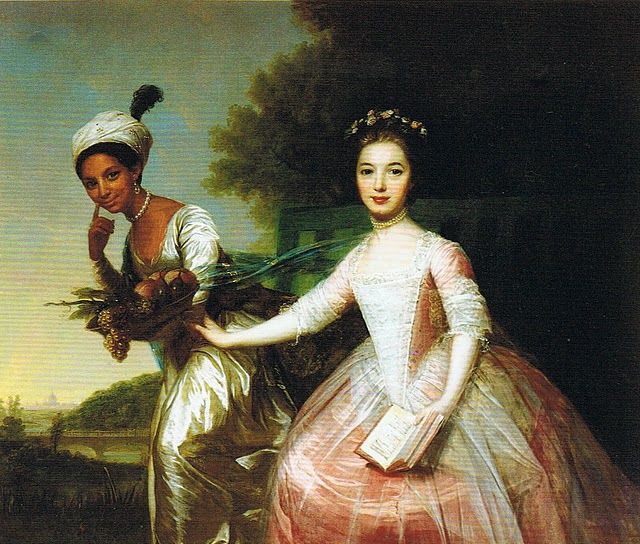 The picture suggests that the two girls were of similar status. At the very least she was a play-mate of her cousin, or perhaps the equivalent of a Lady-in-Waiting. Dido spent some three decades at Kenwood House. Her position was unusual, because as the daughter of a slave she might otherwise have been regarded as having the status of a mere servant. There is some suggestion (from a letter written by a visitor at the time) that she did not actually take meals with the family but would join the family afterwards for coffee in the drawing room.When she grew into adult-hood  she took over responsibility for running the dairy and poultry yards at Kenwood. Unusually for a female, she was also tasked with helping her uncle with his correspondence. Normally this would have been done by a male secretary or a clerk, and indicates a high standard of education. She received an annual allowance of just over £30  – far more than the wages of a domestic servant, but somewhat less than the hundred pounds a year paid to her cousin who, after all, had the great advantage of being both legitimate and an heiress.  But she was to some extent treated as a member of the family, and it is the film’s case that in living with Lord Mansfield as part of his household she directly influenced him in his opinions about slavery. Who is to say that this wasn’t the case? 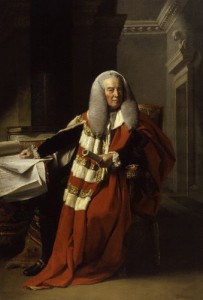 The point is significant because Lord Mansfield became Lord Chief Justice. As such it fell to him to pass judgment in The Somersett Case – where a slave had been brought to this country and escaped, and his master sought to have him returned to his control so that he could be shipped out, enslaved, to the plantations in the Caribbean. Lord Mansfield was by his upbringing and background a member of the aristocracy. He came from a class which had benefited enormously from slavery – and he would have been well aware of the economic impact of declaring slavery to be unlawful. He prevaricated for some time before making his decision – not an outright condemnation of slavery, but a victory for James Somersett, who was set free.

As Lord Mansfield said: “The state of slavery is of such a nature, that it is incapable of being introduced on any reasons, moral or political; but only positive law”  (in other words, an Act of Parliament)  “which preserves its force long after the reasons, occasion, and time itself from whence it was created, is erased from memory: it’s so odious, that nothing can be suffered to support it but positive law. Whatever inconveniences, therefore, may follow from a decision, I cannot say this case is allowed or approved by the law of England”

Dido looked after Lord Mansfield in his old age, and under his Will was left a bequest of £500 and an annuity of over £100. She married, had three children (all boys) and when she died in 1804 was buried at St George’s Fields, off Hanover Square, near the modern Bayswater Road. 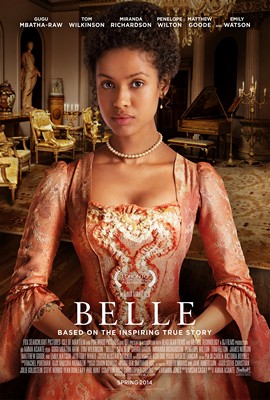 In the film version, shot in the Isle of Man, Oxford and London, the part of Dido Elizabeth Belle is taken by Gugu Mbatha-Raw while Tom Wilkinson plays the part of her uncle Lord Mansfield. The film is directed by Amma Asante, written by Misan Sagay, and produced by Damian Jones. It is released on 5th June and should be worth seeing – and not only for the costumes and the recreation of the period. As the Press Release says: ” Belle’s lineage affords her certain privileges, yet her status prevents her from the traditions of social standing. After meeting an idealistic young vicar’s son bent on changing society, he and Belle help shape her uncle Lord Mansfield’s role as Lord Chief Justice to end slavery in England.”

The interviews with Gugu (British born) suggests that it is a sensitive portrayal of a woman coming to terms with who she is (and is not). She herself describes Dido as “inspiring and uplifting.” And, let’s face it, there are precious few films with a woman of colour cast in the leading role, so it will be interesting to see how she carries it off. I was given the opportunity to interview British director Amma Asante, but unfortunately ran out of time before preparing this blog.

All I can say is  why not go and see it and judge for yourself? It may be conjecture, it may be imaginative – but it is an interesting story and the portrait, be it by Zoffany or some other artist of the period, is testament to a most unusual life. I will be particularly interested in seeing how that fine actor Tom Wilkinson shows the journey of discovery made by Lord Mansfield, who at first did not want to have to bring up  the young Dido, but grew to treat her as a daughter, and through her learned about race, culture and identity.

Tom Wilkinson in the role of Lord Mansfield, and Gugu Mbatha-Raw  as Dido Elizabeth Belle.