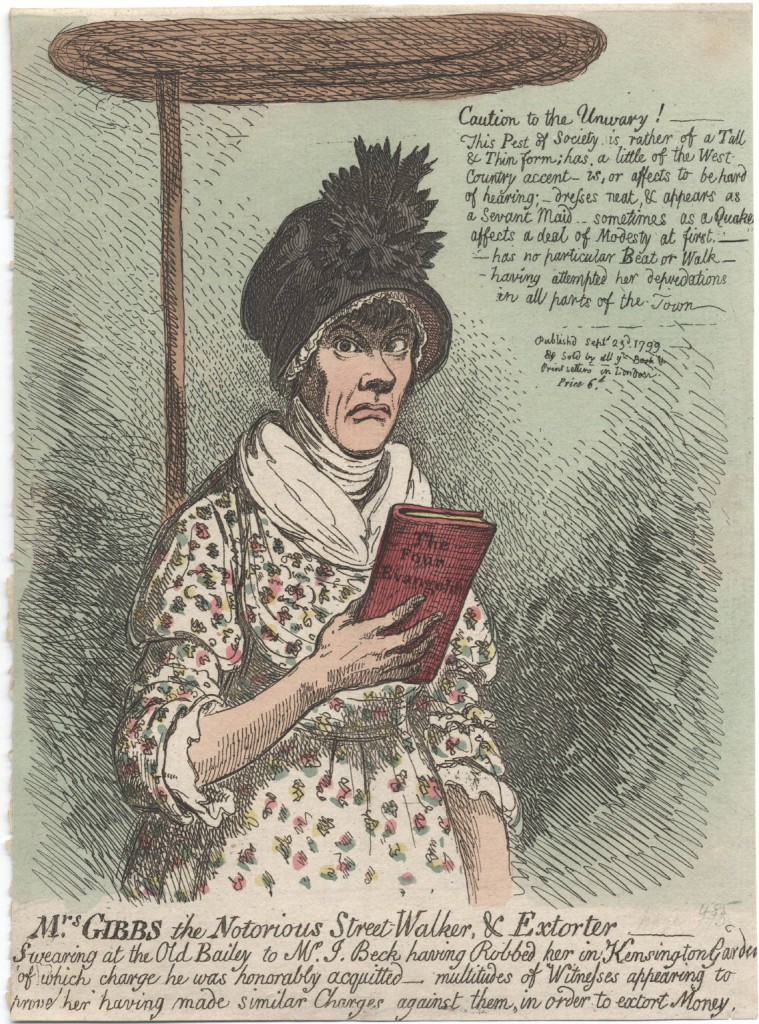 Jane Gibbs, aged 22, giving evidence on the Bible, drawn by James Gillray and published in September 1799

Poor Jane Gibbs didn’t really have a lot going for her when she appeared in Court twice in the autumn of 1799 (once, as a witness, in September, and again as the accused in the following month). One report states that “She is tall, bony thin-visaged and masculine; her face is somewhat marked with the small pox, and her features very coarse; she wants one or two of her front teeth; she has a turned up nose, and squints most horribly.” In addition, on her own admission she was deaf in one ear. On the subsequent court appearance, “she appeared trembling, fainting and pretending to be much afflicted, and then looking round the Office with the expression of the greatest contempt and audacity towards the persons present.”

Why the court appearances – and the “true likenesses” prepared by the likes of James Gillray, S W Fores and others? Because the public needed to be protected from a woman who was regarded as a contemptible extortionist, one who was prepared to tell lies knowing that a man might be put to death as a result of her testimony. 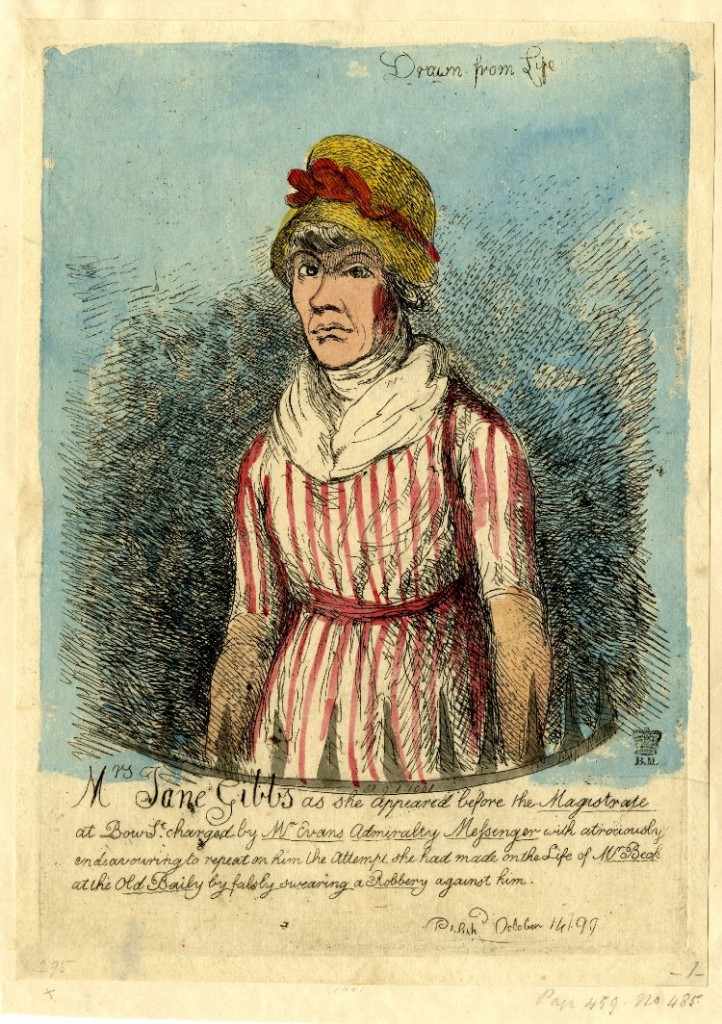 On her own admission she had been cast out by her father, a farmer, when she was 13, after differences had arisen between her and her step-mother. One account suggested that she was from Cornwall and had a West Country accent. She herself claimed that she had come from Kennington (most probably the village of Cannington, just outside Bridgwater in Somerset). She had drifted up to London and taken a few odd jobs – as laundry maid and so on, but rarely keeping in the same employment for more than a few weeks. She kept moving from one district to another, apparently eking a living by living off her wits and by offering her favours to anyone who would have her. She then hit upon the idea of demanding money from men – on pain of accusing them of theft if they did not pay up. Not surprisingly it appears that many men preferred to be parted from a few shillings rather than be charged with robbery – a capital offence. But one Jeremiah Beck was not so lucky. He had encountered Jane Gibbs in a summer house in Kensington Gardens, and it was not long before he had cause to regret ever having met her, let alone having passed the time of day with her. And so it was that in September 1799 the poor Mr Beck appeared in court, facing the death penalty, and having to listen to the testimony of the somewhat unprepossessing Jane Gibbs. His version of events was that she tried to offer her services, then demanded money for drink, and then attacked him before chasing after him, shouting out to passers-by that she had been robbed. The scene was apparently watched by a number of hay-makers at work cutting the grass in Hyde Park, which gives a rather lovely idea of the pastoral scene in central London at the time!

Jane Gibbs on the other hand gave evidence in court that she had been set upon by Beck, and robbed of her life savings. She gave chase or as she said: “he ran all across the gardens towards Hyde-park-corner; then I ran almost three quarters of a mile after him, till my hair dropped with water.”

Fortune favoured the man in the dock – her story had inconsistencies and lacked convincing corroboration. Worse, at least two individuals ‘who happened to be passing the court and looked in to see what was going on’ recognized the accuser and took to the witness stand to testify that they too had been set-up by Jane Gibbs. Each man testified that he had paid up out of fear for his life and reputation. Mind you, it does seem a little odd that two hangers-on in court should just happen to be there, ready to give evidence, when neither of them claim to have known that Jane Gibbs was going to be in court…

Mr Beck was acquitted and Jane Gibb was hissed and booed out of the Old Bailey. As the trial proceedings stated, one of the jurors told the court afterwards: “My Lord, I know the prosecutrix perfectly well; she once acted a similar part towards me.”

It wasn’t long before she was up to her old tricks, this time alleging that she had been robbed by an Admiralty Messenger called Mr Evans. It was 5th October 1799, but this time the watchman recognized her from “her character in the Print Shops”, and she was charged with assault and making false accusations. The Daily Chronicle gave details of her appearance in Court. “The evidence being gone through she was committed to take her trial for the assault on Mr Evans at the next Quarter Sessions for Westminster, and was re-committed to Tothill Fields Bridewell where she is obliged to be confined in a separate cell, to save her from violence of the other female prisoners, who otherwise would have treated her very roughly”

Come the trial and she was found guilty and, as the Newgate Calendar stated, “she was committed to the New Compter, but after being pronounced insane was removed from thence, by an order of the Lord Mayor, to Bedlam. Apparently “she seemed perfectly sensible when she was going, wept very much, and persisted she was not deranged.”

I have no idea how long the unlovely and unloved Jane Gibbs languished in Bedlam, but it is an interesting reminder of how “Photofit” pictures have been used to alert the public to criminal behaviour for several hundred years. The full description under the Gillray portrait reads: ‘Swearing at the Old Bailey to Mr J. Beck having Robbed her in Kensington Garden of which charge he was honorably acquitted – multitudes of Witnesses appearing to prove her having made similar Charges against them, in order to extort Money.’ On the design: ‘Caution to the Unwary! – This Pest of Society is rather of a Tall & Thin form . . . [&c, &c.]’. 23 September 1799. The fact that within days of the appearance of the print, it had been seen by the watchman, shows the efficacy of Gillray’s caricatures and the popularity of his prints.

The second portrait shown is described as being “Drawn from Life”, and has below, “Mrs Jane Gibbs as she appeared before the Magistrate at Bow St., charged by Mr Evans Admiralty Messenger with atrociously endeavouring to repeat on him the Attempt she had made on the Life of Mr Beck at the Old Baily by falsely swearing a Robbery against him. Publishd October 14 1799”. In other words, it followed her second court appearance, whereas the Gillray was published before the Evans incident. 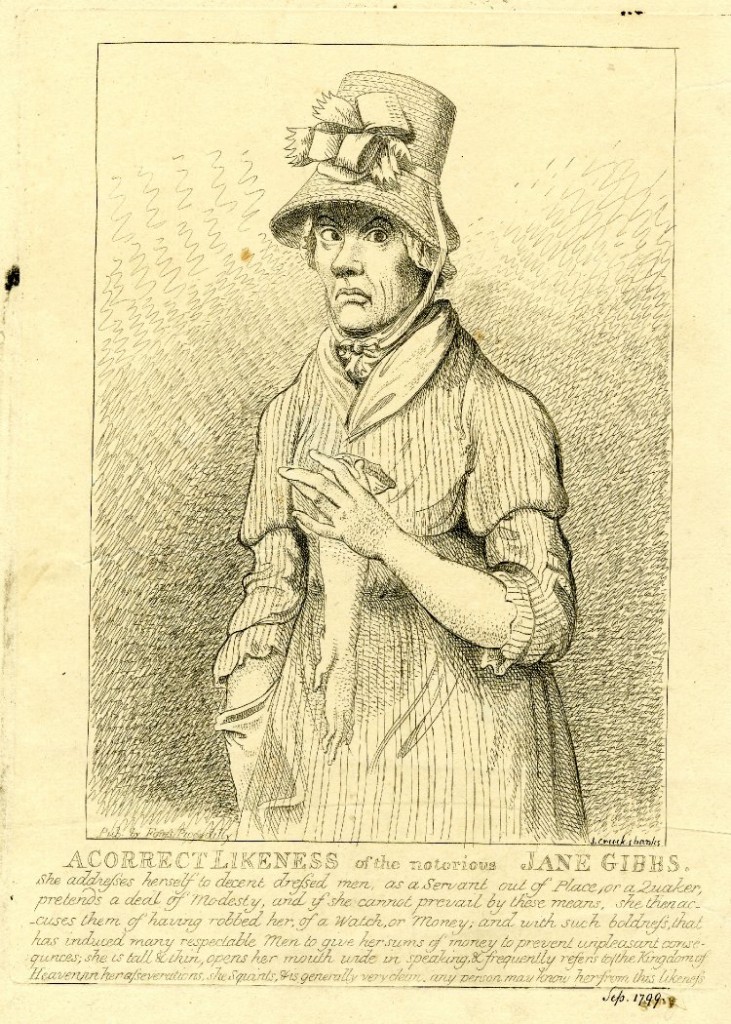 The third portrait, by S W Fores, shows her, hand in pocket and holding on to her glove, and is described as being “A correct likeness of the notorious Jane Gibbs. Beneath the title: ‘She addresses herself to decent dressed men as a Servant out of Place, or a Quaker, pretends a deal of Modesty, and if she cannot prevail by these means, she then accuses them of having robbed her . . . and with such boldness, that has induced many respectable men to give her sums of money to prevent unpleasant consequences.”

My thanks to the Lewis Walpole Library for the Gillray image and to the British Museum for the other two. Additional material came from the excellent online Old Bailey Proceedings and extracts from the Newgate Calendar. 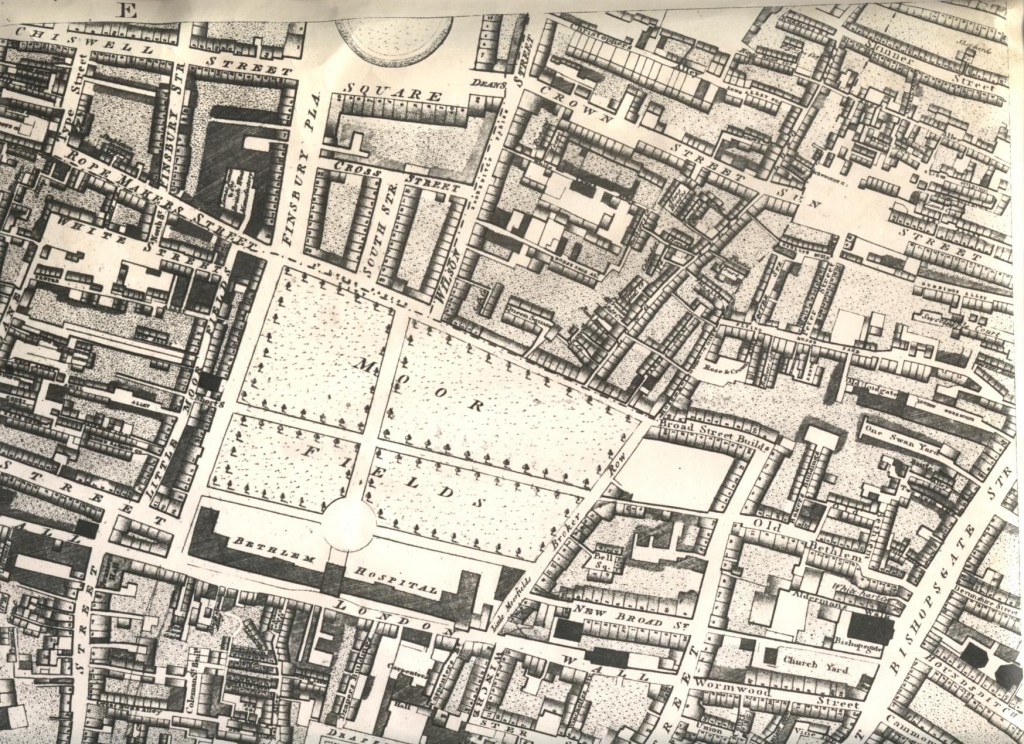