Writing in his note-book of extreme weather conditions my ancestor Richard comments: 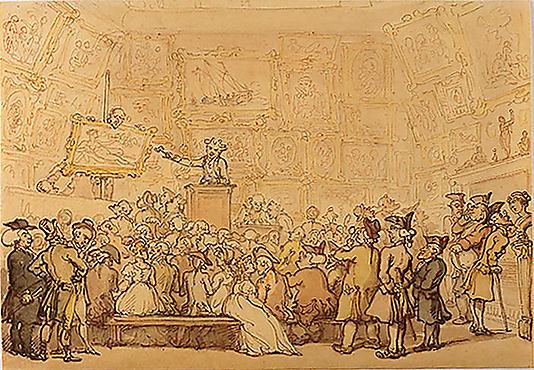 In late November 1790 HMS Elephant narrowly avoided total destruction when lightning struck her whilst she was in Portsmouth harbour. The main topmast  exploded but was held in place by a top-rope, which prevented it plunging through the quarterdeck.

HMS Elephant was one of a class of a dozen ships designed by the brilliant naval architect Sir Thomas Slade (he also designed HMS Victory). Plans for the class of third-rate warships
were standardised and distributed to a number of individual boat-builders. In the case of HMS Elephant the builder was George Parsons who operated on the banks of the River Hamble in Hampshire. She was launched on 24 August 1786.

She was not a particularly handy ship – she was slow, she was unresponsive at the helm, but she had qualities which made her invaluable in battle: she could pack a huge punch, and she was built to take a lot of punishment. On the gundeck she sported 28 thirty-two pounders, with the same number of eighteen pounders on the Upper gundeck. On the Quarter deck she could call on 14 nine-pounder guns, plus another four on the foc’sle. Seventy-four guns in all…. a formidable fighting ship.

In addition she had a very shallow draft – an ideal feature when attacking a fleet at anchor.
Small wonder that Vice-Admiral Horatio Nelson chose HMS Elephant as his flagship, when he was appointed to  lead the main attack on the Norwegian-Danish fleet anchored off Copenhagen in 1801. The squadron was under the overall command of Admiral Sir Hyde Parker, and the rival fleets clashed on 2nd April 1801 in what was to become known as the Battle of Copenhagen. 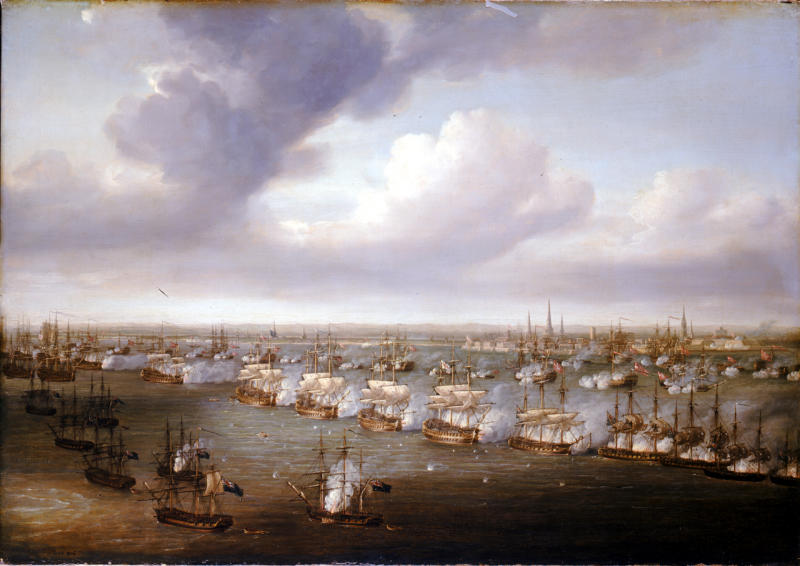 Reportedly, at some stage in the fiercely-fought battle Sir Hyde Parker gave the order to retreat. Nelson acknowledged the order but declined to pass it on or to implement the instructions – he is supposed to have stood on the deck of the Elephant, holding the telescope to his blind eye, and announced that he could see no signal. He stayed in position and led his ships to a great victory, one which many consider to be Nelson’s hardest-fought battle.

HMS Elephant ended up being re-fitted as a 58 gun fourth-rate ship in 1818, and finally ended her days when she was broken up in 1830. Not a bad life for a ship which was so nearly destroyed in that storm which swept Hampshire at the end of November 1790. 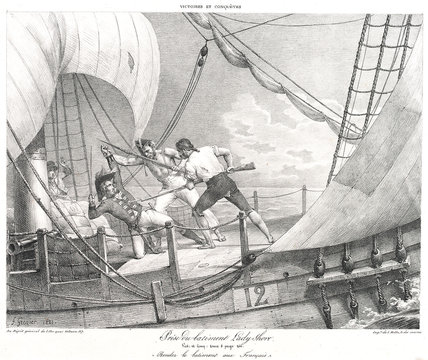 On 1st August 1797 the ship Lady Shore was some four days off the coast of Brazil. The ship had been built for the East India trade, and had gained its name after Lady Charlotte Shore, wife of Sir John Shore, who was Governor General of India at the time. It was on its way to Botany Bay in Port Jackson (the original name for Sydney) and on board were a decidedly motley crew and cargo. The purser, John Black, had joined the ship in Torbay a couple of weeks earlier and had described the sixty soldiers on board (destined to join the new South Wales Corps) in a letter to his father as “the most disagreeable, mutinous set of villains that ever entered into a ship.”  There had already been an attempted mutiny – the soldiers did not want to go to New South Wales, and their number included deserters as well as French and Irish Prisoners of War.

In a well-rehearsed plot, in the early hours of 1st August the French-led soldiers mutinied. At 2 a.m. the cry of “Vive la République !” rang out and the mutineers ran to take their fighting positions. According to the account in Wikipedia: one controlled the hatch of the women’s quarters; two, the hatch of the quarters where soldiers slept, threatening to kill anyone trying to get out; two covered the deck and were to shoot any sailor or soldier present there and who would not surrender; two would control the hatch of the officers’ quarters; two would arrest the captain; two would seize the three officers on deck and prevent them from giving alarm; and the last one would open an ammunition box, distribute it to his fellow mutineers, and patrol to prevent anyone to flank them.

The captain, by the name of James Willcocks, was killed along with the Chief Mate Lambert.The mutineers quickly took control of the ship and anyone not part of the mutiny was locked below decks (apart from the ship’s carpenter, by the name of Thomas Millard, who was given the job of building a long boat). Intriguingly two of those on board kept diaries which have survived – one by the purser John Black, and the other by Thomas Millard. Fate was to have rather different outcomes in store for the two diarists… 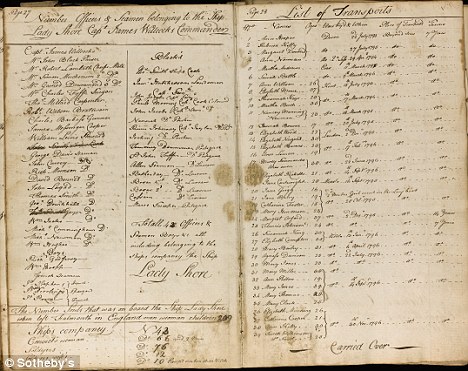 An extract from Millard’s diary, courtesy of Sotheby’s.

Millard describes the events of 1st August: ‘We were Alarm’d by the firing of Musketts on the deck and to my Great Surpris the Capt falling down the steeridge ladder which woke me out of my Sleep,’ he wrote.

Millard records: ‘I was afraid every minute that some or the others would Blow my brains out with Pistol or run the Bayonets into me.’

Millard was obviously good at his job in constructing a sea-worthy vessel, because a fortnight after the Lady Shore had been seized the purser and 28 others were set adrift in the longboat, along with “three small casks of water, containing about ninety gallons, four bags of bread and three pieces of salt beef.” Thomas Millard was kept behind on board the Lady Shore, as a prisoner of the mutineers.

The castaways had also managed to smuggle aboard “two hams, two cheeses, and a small keg containing about four gallons of rum.”  They were also given a quadrant for navigation (John Black was the navigating officer as well as being the purser) and he had a small pocket compass. They were some 300 nautical miles from the Portuguese controlled coastal settlement of Rio Grande…. and they were the lucky ones!

Remaining on board were the mutineers and the cargo – which just happened to consist of 66 female prisoners on their way to the New South Wales penal colony, for offences which we would now describe as minor – mostly theft and pilfering. For them, the freedom they thought had suddenly materialised was to bring untold horrors.

Staying with the castaways, they encountered tropical storms, torrential rain and high sea, but after only two days found themselves hurled ashore at Rio Grande where the locals took pity on their condition, gave them food and shelter, and in due course escorted them to Rio de Janeiro. For the purser it was a chance to resume his sailing career, mainly as a privateer i.e. someone authorized by the British Government to carry out acts of piracy on the High Seas (mostly against the Spanish and French merchant vessels). He later became a whaler in New South Wales, and subsequently bought land, built a liquor store and developed a successful business. He continued to have itchy feet and spent most of his time at sea, leaving the shop to be managed by his wife. Some years later (1802) he was on board The Fly which sank with all hands on its journey from India back to Tasmania.

But let us return to the unfortunates on board the Lady Shore, heading for an unknown future…

The Lady Shore headed not for Portuguese territory of Brazil but for the Spanish controlled territories of Uruguay, landing at Montevideo some 300 miles to the south. There they were all imprisoned. Well, more accurately, the prettier female convicts were billeted on eager locals throughout the town, while those less endowed with female graces were locked up along with the soldiers who had taken part in the mutiny. There is no record of the fate which met them, but the conditions in which they were kept must have been appalling. For the women, a life as an unpaid house servant was probably the best they could hope for…

The carpenter, Thomas Millard, was allowed out of prison during the day because his skills were needed as a shipwright – and because it was accepted that he alone of the prisoners had taken no part in supporting the mutiny. He was ultimately released from captivity, in the summer of 1799, and made his way north to America, settling in New Jersey, marrying, and having 2 children.

It is Millard’s diary of the ensuing 18 months which was auctioned at Sotheby’s on May 9th this year, fetching £12,500. It provides a fascinating companion to the story written by John Black and which was published by his father on the basis of letters home etc.

I find it strange that we all know the story of The Mutiny on the Bounty – but not the Mutiny on the Lady Shore. Here, if ever there was one, is a film crying out to be made! With a cast of 66 women, a handful of Frenchmen and a suitably swash-buckling John Black it sounds like a sure-fire box office success!