I am not normally that interested in militaria, but every so often come across something which catches my eye – in this case a pair of beautiful pistols on the Metropolitan Museum site, and made by Samuel Brunn in 1800/1801.

The Museum site describes the pair of pistols as being “among the finest known examples of English Neoclassical-style firearms. Each stock is inlaid with engraved sheet silver and embellished with heavy cast-silver mounts. This decoration was inspired by contemporary French Empire firearms, such as those by Boutet. Several of the motifs are based on ancient Roman sources. On the sideplate, for example, the Nereid riding a sea-leopard derives from an engraving of 1762 depicting a wall painting in the recently found ruins of Herculaneum. On the trigger guard, the oval medallion representing Hercules with a defeated Amazon is copied from a well-known antique gem. The Medusa head on the butt also derives from Classical art, but here the idealized model has been transformed into a grimacing, almost humorous caricature of the legendary gorgon.”

The  pistols are sixteen inches long, and are made out of walnut wood and steel, decorated in sterling silver. The silver decorations were probably made by silversmith Michael Bennett, who was active in London until his death in 1823, operating from premises at 36 Cock Lane, Smithfield.

Samuel Brunn had originally bought a share in the business of John Knubley, who had traded at 7 Charing Cross in London. Knubley was the son of a gun-maker and had originally traded in Otley, Yorkshire before moving down to London in 1771, and had built up a successful business until his death in 1795. For two years Brunn was in business trading as “Knubley, Brunn & Co, Charing Cross”, probably in partnership with Sarah, John Knubley’s widow. Brunn then sold  his share to John Mallet, who continued to operate at Charing Cross until 1803. This emphasises the importance of the area around Charing Cross as a centre of exquisite gun-making. 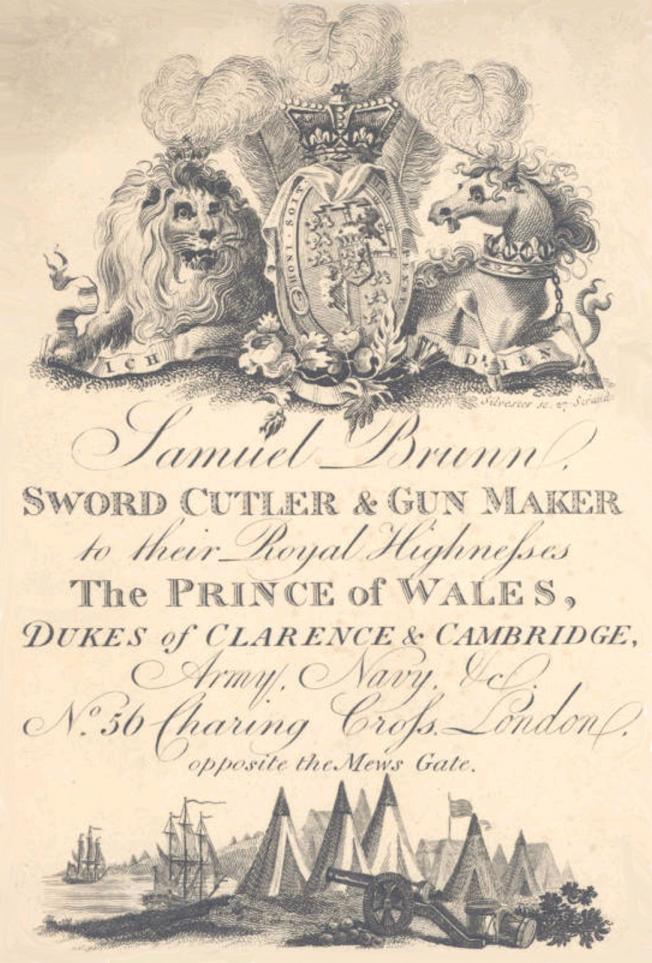 Brunn  then set up on his own and operated as “Samuel Brunn, sword cutler and gun-maker” at 55 Charing Cross between 1798 and 1804. He then moved to adjoining premises at 56 Charing Cross and remained there between 1805 and 1820. He was appointed “Sword Cutler and Gunmaker  to the Prince of Wales” in 1800 and remained in that post for eleven years. It is quite possible that these pistols were made for the Prince. He also made pistols and swords for various other members of the Royal family. Between 1797 and 1809 he was Contractor to Ordnance, in other words he was commissioned to make trade muskets, cannon locks, pistols and broadswords for the Board of Ordnance. He was also described as being ‘Cutler to the Patriotic Fund’. ‘The Patriotic Fund’ was founded on 28 July 1803 at Lloyd’s Coffee House – is still going strong – and was launched in order to give grants to those wounded in service to the Crown and to set up annuities to the dependents of those killed in action. It also commissioned the manufacture of high quality swords to be awarded to servicemen who showed exceptional courage and bravery – which is presumably how Samuel Brunn got involved…

It looks as though Samuel continued to operate until 1820 but then at some stage fell on hard times. A newspaper report in 1831 refers to bankruptcy proceedings against Samuel, who by then had fallen from grace to the extent of being described as a ‘chapman’ i.e. a pedlar:

A sad end for a distinguished craftsman. Presumably when Napoleon was finally defeated the Board of Ordnance were no longer stock-piling weapons, and the Patriotic Fund were no longer dishing out ceremonial swords as a reward for war heroes, so like many other sword cutlers Samuel Brunn found himself on the scrap heap. There is some suggestion that he moved to Bath, where he spent his final years in straitened circumstances. I cannot find a record of his death. 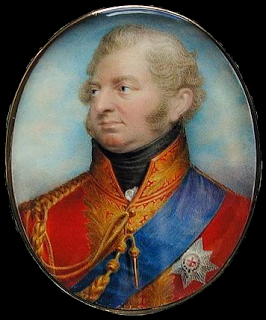 Picture the scene 222 years ago this month: a contingent of many  thousands of men, led by the second son of his illustrious majesty King George III, look out across the flat landscape of Flanders near the village of Tourcoing. Lille was a few miles away. It is May 1794 and the British forces have combined with forces led by Prince Josias of Saxe-Coburg to make up an army  72,000 strong. The Austrians are the dominant partner in the alliance, and they decide to split their forces into six columns, and to divide and surround the French.

The British force consisted of eight battalions, six squadrons, and presumably they had all turned up for work that day thinking it was going to be the usual thing – fire a few cannon, defeat the French, and come home to a heroes welcome a la Marlborough.

Only it didn’t quite turn out like that. The outnumbered French forces, led by Joseph Southam in the absence of the usual commander Pichegru, outflanked the coalition armies. Well, we were not very good at speaking to each other, no-one seemed to know what they should be doing, half the troops were kept in reserve and weren’t used, and the result was that the French were victorious, we lost rather a lot of soldiers – and the Duke of York narrowly escaped capture by fleeing across a river. Allied losses amounted to 4000 killed or seriously wounded, with 1500 taken prisoner, while the French lost 3000.  As many as 50 of our  guns were captured…. so we all came home to lick our wounds. 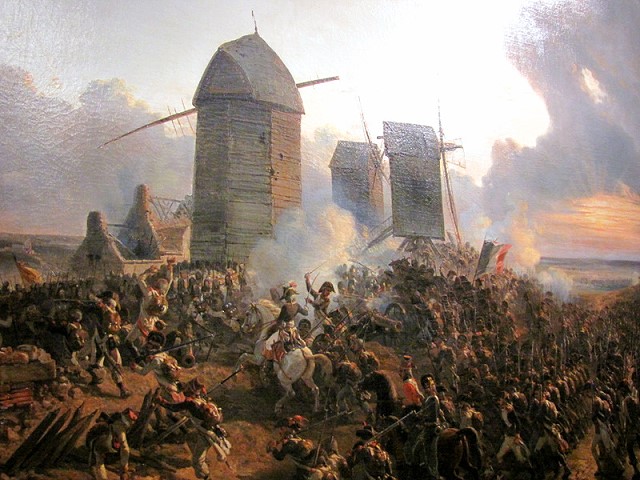 Windmills and troops: the Battle of Tourcoing

As minor battles go it was nothing very special – although it did mark the beginning of the withdrawal of the allied forces from Flanders, and led to French supremacy throughout continental Europe. Oh, and Hilaire Belloc  wrote a book about it. We remember the occasion, if not the actual battle which was spread out over many square miles of territory, because of a nursery rhyme. The event may or may not have been true – there is apparently a “hill” of sorts near Tourcoing, where the town of Cassel is situated, all of  570 feet above sea level.  but in all likelihood the song had been in circulation for many years, and the name of the “Duke of York” was substituted for some earlier poor general. 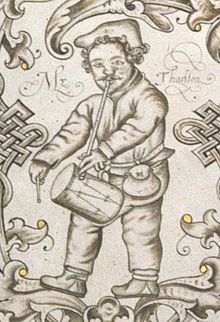 This is borne out by the fact that a song appeared in print back in 1642 under the title of “Old Tarlton’s Song. Tarlton was a well known clown in the second half of the sixteenth century, and his version ran:

“The King of France with forty thousand men,
Came up a hill and so came downe againe”

Other versions give the leader as Napoleon – or some attribute the vacillating and humiliating  action to James II (a former Duke of York) who marched his troops across Salisbury Plain in 1688 and then retreated in the face of the invasion by William of Orange. Whatever – it is a form of ridicule which has stuck, and Prince Frederick, Duke of York and Albany, (1763–1827) will just have to live with it! So, boys and girls, take it away!

Oh, the Grand Duke of York

He had ten thousand men

He marched them up to the top of the hill

And he marched them down again.

And when they were only half way up

They were neither up nor down.